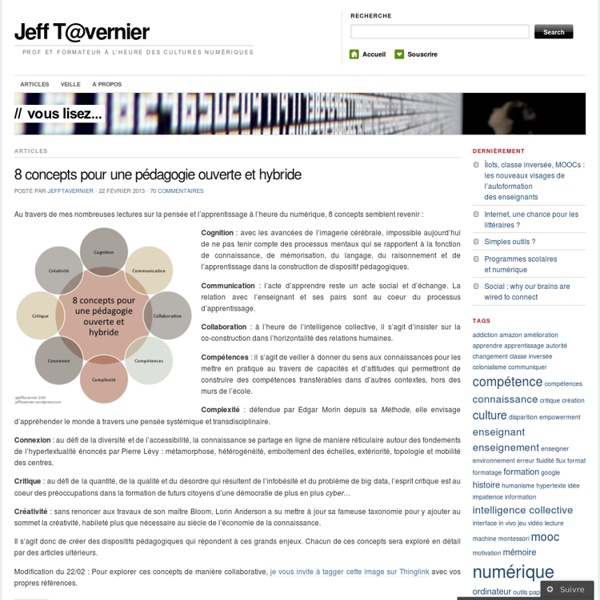 Crafting a successful BYOD policy By Michael Shoaf and Dianna R. Foley Read more by Contributor October 15th, 2013 The school district purchased technology equipment that can be used daily and/or checked out for extended periods of time by students. District leadership also knows and appreciates that students own, and often prefer to use, personal computers and devices for their educational experience.

4 Different Visual Guides To Bloom's Taxonomy I recently received a question from a reader who wasn’t clear about what exactly Bloom’s taxonomy is. It got me thinking that perhaps not everyone is a Bloom’s taxonomy expert, and a little bit of a refresher might be helpful. In later posts, we’ll look at a variety of iterations and interpretations of the traditional Bloom’s graphic, along with apps and tools that address Bloom’s objectives in our modern classrooms. In a nutshell, Bloom’s taxonomy is a grouping of educational objectives that first came about in 1956 in an attempt to classify educational objectives. The original looked like this:

Creativity Can Any School Foster Pure Creativity? How do we promote creativity in schools? This is one of the prevailing concerns of many progressive education reformers. From a long-term fiscal perspective, creativity can lead to innovation, and for the U.S. to have a competitive edge in the global economy, minds capable of identifying problems and imagining new possibilities are a necessity. But given the constructs of public schools, can creativity truly be valued? Continue Reading Lesson idea: multiple intelligence The theory of multiple intelligences came up in English in Mind this week. I knew it would really interest my students, so I decided to explore it a bit more. Here’s another idea to get your teens talking, and reflecting on their own skills/abilities. Lead in: I did a quick ‘unscramble the letters to make words’ task

Why Technology Has Failed To Revolutionise Education - Total Education This Will Revolutionize Education is a video by Veritasium that has recently gone viral. Veritasium – a science video blog – produces ‘experiments, expert videos, cool demos, and discussions with the public about everything science.’ This particular video (which is below) features Derek Muller who explains that, despite constant claims that disruptive technologies are set to revolutionise education, we haven’t actually seen any digital education revolution since before the times of Thomas Edison. Rather, what we have seen is a gradual evolution. Muller brings up multiple occasions during the 20th century where people have claimed that education was on the brink of being revolutionised. First motion picture, then radio, television, computers and even video disks were hailed as ‘the next big thing.’

The Big Picture Of Education Technology: The Padagogy Wheel The Big Picture Of Education Technology: The Padagogy Wheel by TeachThought Staff Teaching is a matter of design. That’s not new, but in an era of change and possibility, it’s more apparent now than ever. An outstanding lesson using mobile learning? Recently I was asked / was volunteered to lead something called a "lesson observation for real" in Coventry. This is essentially a lesson taught in the round in front of anything up to 100 colleagues and, crucially, an OFSTED registered Inspector. The rationale behind it lies not in the inspection of the lesson for a grade, but the sharing of the inspector's thought processes when observing the lesson, and illuminates the (at times unfathomable) thinking behind it all. As a teacher, I think it's useful to be able to hear that explained with regards to a lesson I can watch live, although I'm not sure that as the person conducting the lesson I was aware of much more than the slight niff of me crapping myself throughout! Not a nice image to leave this first paragraph on.