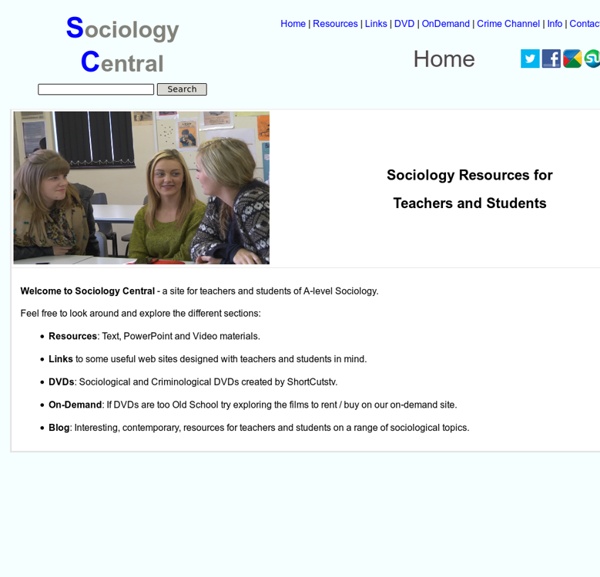 Gender and Society: A Matter of Nature or Nurture? "Men have always been afraid that women could get along without them." --Margaret Mead In addition to age, gender is one of the universal dimensions on which status differences are based. Unlike sex, which is a biological concept, gender is a social construct specifying the socially and culturally prescribed roles that men and women are to follow. Sharpie die hards keep Australia's only home-grown youth subculture alive Updated Australian music stalwart Chane Chane is part of a small rearguard of 'sharpies' desperate to preserve a subculture that flourished in the late 60s and early 70s. Defined by idiosyncratic fashion and footwear and even stranger dancing and live music, some claim that the sharpies were Australia's only truly home-grown youth subculture.

Research Methods: Activities We Already Do It has been my experience as a teacher that students often feel very distant from formal Social Research Methods...that is, these Methods seem very much apart from their lives and are quite imposing to them. While undoubtedly there are some students who take to them immediately, the great majority of people feel quite intimidated by them and the prospect of learning them. By and large, social research is thought of as something “experts” do...social scientists with a great deal of education and experience, not something “ordinary” people do...especially not without specialized training. While there certainly is some truth to these ideas, if left at this level of understanding, students will tend to react to research with much doubt and angst. However, I don’t think this is the only option when approaching either a Research Methods component in an Introductory course, nor in an upper-level course in Social Research Methods (primarily for discipline majors). Experiments

Masculinities To speak of masculinities is to speak about gender relations. Masculinities are not equivalent to men; they concern the position of men in a gender order. They can be defined as the patterns of practice by which people (both men and women, though predominantly men) engage that position. There is abundant evidence that masculinities are multiple, with internal complexities and even contradictions; also that masculinities change in history, and that women have a considerable role in making them, in interaction with boys and men. I have been an interested observer of masculinities all my life, but began to think of this as a researchable issue in the late 1970s. At that time, anyone interested in power structures could see that the feminist challenge to patriarchy must mean changes in the lives of men.

Teaching of Psych Idea Exchange: An OTRP Resource / Research Methods in the Classroom Main -> In the Classroom: Research Methods Dogbert demonstrates how NOT to collect data via phone surveys (via notawfulandboring.blogspot.com) Using the free software at FreeIAT , you can create your own implicit association tests. With faculty supervision, this could provide some interesting lessons for a Research Methods course. Instructor's Guide to Using Research Methods and Statistics Concept Maps (2013) from the Office of Teaching Resources in Psychology (OTRP):

Functionalism (philosophy of mind) Since mental states are identified by a functional role, they are said to be realized on multiple levels; in other words, they are able to be manifested in various systems, even perhaps computers, so long as the system performs the appropriate functions. While computers are physical devices with electronic substrate that perform computations on inputs to give outputs, so brains are physical devices with neural substrate that perform computations on inputs which produce behaviors. An important part of some accounts of functionalism is the idea of multiple realizability. Since, according to standard functionalist theories, mental states are the corresponding functional role, mental states can be sufficiently explained without taking into account the underlying physical medium (e.g. the brain, neurons, etc.) that realizes such states; one need only take into account the higher-level functions in the cognitive system.

Millennials: Technology = Social Connection Where’s the strangest place you’ve ever used your smartphone or tablet PC? For Millennials, the real question is where haven’t they used their devices. While the Millennial generation indeed founded the social media movement, having been born directly into a new era of technology between 1977 and 1995, their interests, backgrounds and aspirations span well beyond what’s listed on their Facebook pages.

Future - How generation Z is shaping digital technology “It’s hard to remember a world without technology,” says Russell Forrest, 16, a student at St Thomas the Apostle College, in Peckham, south London. “It’s weird to imagine one without smartphones; my generation uses mobile phones like personal computers. We can do almost anything.” Forrest is one of the UK’s ‘bright young things’ when it comes to digital technology, and one who appears destined to help plug the country’s yawning skills gap. His award-winning ‘History Hunter’ app teaches world history via a video game mechanic and playable characters that travel through time.

9 Depressing Facts From the Latest Women in Media Report Women are inching towards media equality, but it’s slow going. That’s what we learned from the Women’s Media Center’s annual report on the status of women in TV, news, movies, and even social media. Some things are unsurprising, like the fact that women are vastly underrepresented in sports journalism. Other things are more interesting, like the fact that the Melissa Harris-Perry Show has more diversity than all the other Sunday political talk shows combined. The highest-paid female movie star, Angelina Jolie, makes about the same per movie as the two lowest-paid male stars, Denzel Washington and Liam Neeson.

6 Ways Gen Z Will Change the Tech World Free Webinar | August 16th Find out how to optimize your website to give your customers experiences that will have the biggest ROI for your business. Register Now » The world of technology is in constant motion. Video games launch every few days, social media apps come out with weekly updates and Apple manages to pump out a new, slimmer phone every September.