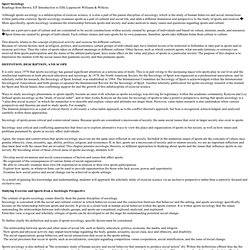 Introduction to ESS, Lippincott Williams & Wilkins. Although sports sociology is a subdiscipline of exercise science, it is also a part of the parent discipline of sociology, which is the study of human behavior and social interactions within particular contexts. Sports sociology examines sports as a part of cultural and social life, and adds a different dimension and perspective to the study of sports and exercise. More specifically, sports sociology examines the relationship between sports and society and seeks answers to many issues and questions regarding sports and culture. Sports are a pervasive part of culture and are considered to be social constructions within society created by groups of individuals and based on values, interests, needs, and resources. 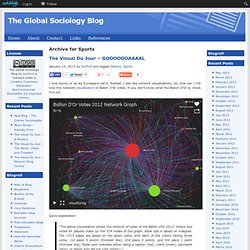 It very nicely and powerfully shows what sociological analysis can do, especially with respect to a very high-profile event, such as the “strike” by the French football team during the 2010 World Cup in South Africa. I really do hope that this book will get an English edition. If that were the case, I would jump on it and make my students use in my undergraduate classes.

It is written at the perfect level, uses a lot of concrete examples. There isn’t too much jargon but the sociological analysis is crystal clear and very powerful. The point of sociological analysis then is to put these events in the proper context (what I call SHiP – structure, history, power) and to retrace the sociological factors that shaped this French national football team (especially in contrast with the 1998 team). Sports: Soccer: Academic Study: Sociology. Schooled - The Price of College Sports (Official Trailer) House Committee Announces Hearing on Union Efforts to Unionize Student Athletes. Northwestern Football Players Win Union Ruling ... So What Now? Yesterday, the National Labor Relations Board in Chicago ruled that Northwestern University football players, under federal law, qualify as employees and therefore are entitled to form a union. 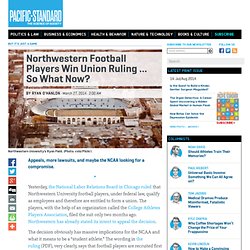 The players, with the help of an organization called the College Athletes Players Association, filed the suit only two months ago. Lawyers file arguments in favor of Northwestern student-athlete unions. Lawyers for Northwestern University student-athlete football players on Thursday evening filed their latest arguments in favor of allowing the players to vote to form a union. 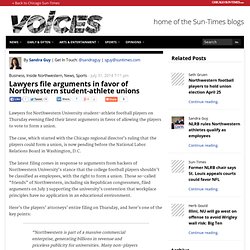 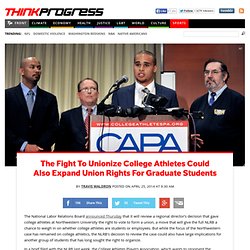 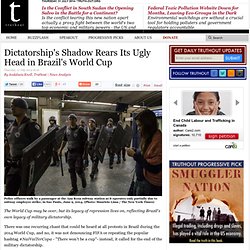 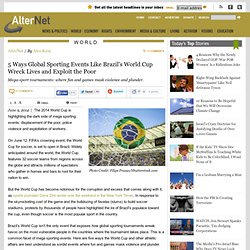 Join our email list: Stay up to date with the latest headlines via email. Evict FIFA From Brazil: 33,000 On Strike, 55 Killed In World Cup’s War Against Working People. The most vibrant community north of Rio de Janeiro has been invaded and occupied by army soldiers and military police. 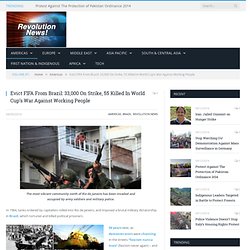 In 1964, tanks ordered by capitalists rolled into Rio de Janeiro, and imposed a brutal military dictatorship in Brazil, which tortured and killed political prisoners. 50 years later, as demonstrators were chanting in the streets “fascism nunca mais” (fascism never again) – and were attacked by the military police because of this –the government was ordering army soldiers and military police to invade and occupy the most politically and socially active communities of Mare in northern Rio de Janeiro, so that the International Olympic Committee can build a stadium for their games in 2016, and social protests against the World Cup can be suppressed more easily.