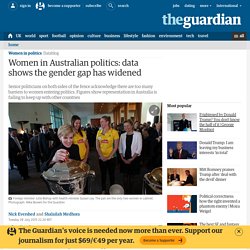 The minister assisting the prime minister for women, Michaelia Cash, who is by default in charge of the women’s affairs portfolio, has said her party should look at targets. “I don’t think we’re afraid and I don’t think we’re unwilling,” she said. “I think it is a conversation that we need to have. Of course the Liberal party can do more, and I’m not going to stand here and say no, because the statistics indicate that clearly we should do more.” So, with senior politicians on both sides of the fence acknowledging there is a problem, what is the current gender breakdown of politicians in Australia? From a high point of 30.8% in 2009, the proportion of women in Australian parliaments declined to 29% in 2013: 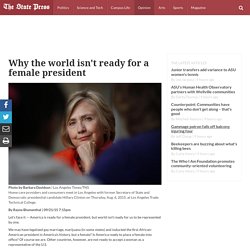 We may have legalized gay marriage, marijuana (in some states) and inducted the first African-American president in America’s history, but a female? Is America ready to place a female into office? 2016 presidential election results: Hillary Clinton's loss is a sign that America was never ready for a woman president — Quartz. People everywhere are down on democracy. 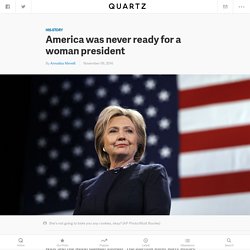 Especially young people. In fact, so rampant is democratic indifference and disengagement among millennials that a shocking share of them are open to trying something new—like, say, government by military coup. That’s according to research by Yascha Mounk, a Harvard University researcher, and Roberto Stefan Foa, a political scientist at the University of Melbourne. The remit of their study, which the Journal of Democracy will publish in January, analyzes historical data on attitudes toward government that spans various generations in North America, Western Europe, Australia, and New Zealand.

Why did women vote for Trump? Because misogyny is not a male-only attribute. Susan Sarandon told us why she would not vote for Hillary Clinton: “I don’t vote with my vagina.” 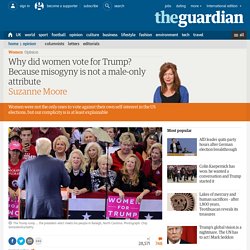 Nor, it seems, do many women. The howl of pain that accompanied the post-election analysis has often centred on that one disturbing statistic: 53% of white women voted for a man who calls women pigs, has a string of sexual assault claims still outstanding, who will happily turn back women’s rights to contraception and abortion if it suits him. Women beware women. Facts and Statistics About Transgender People – Transitioning Numbers. Trans(form) is a month-long series on MarieClaire.com that explores the challenges, surprises, and victories of transitioning today. 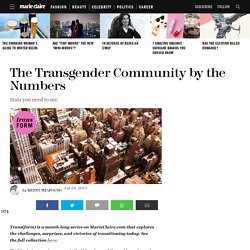 See the full collection here. The life of a transgender person—in the U.S. and around the world—can be vastly challenging and rife with discrimination. But it can also be joyful, triumphant, and transformative—not just for the individual, but for those who love and accept them. Thanks to the likes of Caitlyn Jenner and Laverne Cox, the numbers of Americans who fall into that last camp are growing. H&M-Owned Label Uses Transgender Models In Newest Fall Ad Campaign.

Trans visibility is slowly but surely becoming a mainstay in popular culture in places all over the world, and the fashion industry is starting to take notice. 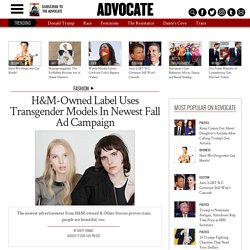 Fashion brand & Other Stories — a sister-company owned by Swedish international retail giant H&M — launched a new campaign Friday for their fall collection that uses transgender models at the forefront. But the inclusion of trans professionals didn’t stop at just models. & Other Stories also used trans photographers, stylists, and makeup artists for their newest advertisements. According to Time, photographer Amos Mac, makeup artist Nina Poon, and stylist Love Bailey, were all hired to work behind-the-scenes to make sure the photos featuring models Valentijn De Hingh and Hari Nefstylist were the best they could possibly be. 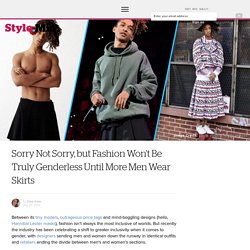 But recently the industry has been celebrating a shift to greater inclusivity when it comes to gender, with designers sending men and women down the runway in identical outfits and retailers ending the divide between men's and women's sections. Jaden Smith Doesn't Distinguish Between Men and Women's Clothing - Jaden Smith British GQ Style Interview. Getty Advertisement - Continue Reading Below It's obviously a family rule in the Pinkett-Smith household to confidently walk to the beat of your own drum. 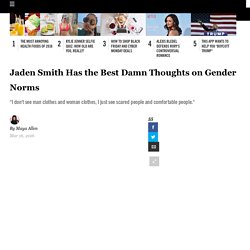 During a day-long takeover of the Teen Vogue Snapchat account, the 17-year-old actress, who appears on the cover of the magazine's latest issue, explained to fans that she 'identifies as a black bisexual woman', before admitting that it had taken her some time to feel comfortable about openly revealing and embracing her sexuality. 'It's a really, really hard thing to be silenced and it's deeply bruising to fight against your identity and to mold yourselves into shapes that you just shouldn't be in,' she said in the candid clip, which was also posted on her Tumblr page. 'As someone who identifies as a black bisexual woman, I've been through it and it hurts and it's awkward and it's uncomfortable.

Scroll down for video Speaking out: The Hunger Games star Amandla Stenberg came out as bisexual while posting videos on the Teen Vogue Snapchat account. Teens These Days Are Queer AF, New Study Says. A new survey of young Americans aged 13 to 20 years old (also known, in marketing-speak, as "Generation Z") has found that they are far more open-minded and permissive than their older millennial counterparts when it comes to issues of gender and sexuality. 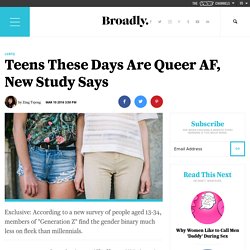 According to a report by trend forecasting agency J. Walter Thompson Innovation Group, only 48 percent of Gen Zs identify as exclusively heterosexual, compared to 65 percent of millennials aged 21 to 34. On a scale of zero to six, where zero signified "completely straight" and six meant "completely homosexual," more than a third of the young demographic chose a number between one and five, indicating that they were bisexual to some degree. Only 24 percent of their older counterparts identified this way. 8 Transgender Models You Need to Know. These models are doing major things—in the fashion industry and beyond. Here are their inspiring stories. Couple raise child as 'gender neutral' to avoid stereotyping. "I wanted to avoid all that stereotyping," she said. "Stereotypes seem fundamentally stupid. Transgender model Andreja Pejic makes her female runway debut. Modal Trigger.

Women have been named to some of Japan&apos;s top posts, but the country still lags on female empowerment. Acknowledging that Japan has failed to fully promote the advancement of women, the Japanese government has pledged to elevate their status in the workplace and in the country’s political arena. In the last five months, three women assumed high-profile political positions in Japan: The country’s new defense minister, the governor of Tokyo and the leader of the opposition Democratic Party are all women. Refugees and integration in the UK: the role of gender. The population of refugees in the UK is growing, yet our understanding of the process of integration is limited.

Jenny Phillimore and Sin Yi Cheung break new ground and explain how gender impacts on the process. They offer unique insights drawing on areas including language proficiency, health, employment, and housing, and outline key recommendations that the government must consider in order to enable those individuals to thrive. Abortion Stories: Women Talk About Abortion. Gender pay gap narrows but men earning 23% more than women, agency finds. The gender pay gap and the gap in the proportion of senior managers who are women have both narrowed but men continue to earn 23% more than women on average, the Workplace Gender Equality Agency has found.

The First Major Plus-Size Male Model Takes On His Critics. Global Development Professionals Network. Unisex scents. Is makeup for men a fad or the future? With Generation Z comes genderless fashion. Why changing perceptions is the key to gender equality. The empowerment trap: Ivanka Trump and the art of co-opting feminism.