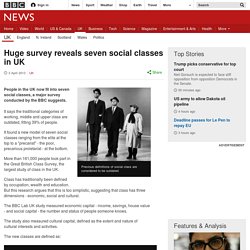 It says the traditional categories of working, middle and upper class are outdated, fitting 39% of people. It found a new model of seven social classes ranging from the elite at the top to a "precariat" - the poor, precarious proletariat - at the bottom. More than 161,000 people took part in the Great British Class Survey, the largest study of class in the UK. Class has traditionally been defined by occupation, wealth and education. But this research argues that this is too simplistic, suggesting that class has three dimensions - economic, social and cultural. The BBC Lab UK study measured economic capital - income, savings, house value - and social capital - the number and status of people someone knows. The study also measured cultural capital, defined as the extent and nature of cultural interests and activities. Private school pupils ‘increasingly dominating’ British life, says Michael Gove. The comments come just weeks after a cross-party committee of MPs and peers warned that levels of social mobility in Britain had failed to improve since the 1970s. 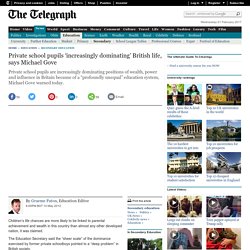 In a report, the all-party Parliamentary group on social mobility said that half of all British children’s life chances were stubbornly linked to the success of their parents – more than in any other western country. Addressing a conference at fee-paying Brighton College, East Sussex, Mr Gove said society had "failed to tackle” the problem with “anything like the radicalism required”. George Osborne announces reforms to Britain's education system. Theresa May announces massive education system shake-up reaching far beyond new grammar schools. Theresa May finally officially revealed her plans for a new wave of grammar schools - and launched a massive shake-up of the education system. 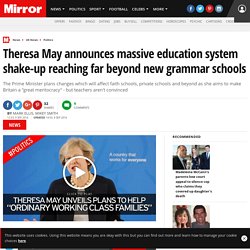 The Prime Minister declared she wanted to help "ordinary working class families" and create a school system that works for everyone as she bids to end "selection by house price". Mrs May had been expected to tear up Labour’s 1998 ban on building new grammar schools, but she also announced plans for faith schools, private schools and university involvement. And she insisted there would be no return to the "binary system" of secondary moderns and grammar schools. She said: “I want this country to be a great meritocracy. I want to see more houses built, better productivity so we can have more well-paid jobs, more economic growth not just in the South East of England but across the whole country to help more people get on.

“That means we need more great schools. But the Prime Minister was accused of living in an "alternate reality" by one teaching union. Big city schools hit in funding shake-up. Image copyright Reuters The biggest shake-up of school funding in England for decades will see less money for big cities such as London, Manchester, Liverpool and Birmingham and bigger budgets for schools in the suburbs and shires. 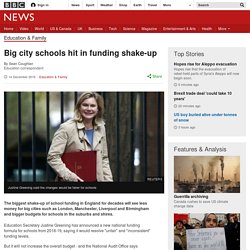 Education Secretary Justine Greening has announced a new national funding formula for schools from 2018-19, saying it would resolve "unfair" and "inconsistent" funding levels. But it will not increase the overall budget - and the National Audit Office says schools face cuts of £3bn. 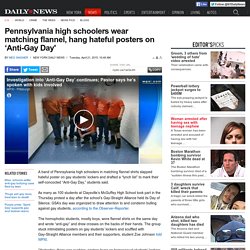 As many as 100 students at Claysville’s McGuffey High School took part in the Thursday protest a day after the school’s Gay-Straight Alliance held its Day of Silence. GSA’s day was organized to draw attention to and condemn bulling against gay students, according to the Observer-Reporter. The homophobic students, mostly boys, wore flannel shirts on the same day and wrote “anti-gay” and drew crosses on the backs of their hands. The group stuck intimidating posters on gay students’ lockers and scuffled with Gay-Straight Alliance members and their supporters, student Zoe Johnson told WPXI.

“Yesterday, there was pushing, posters hung on homosexual students’ lockers. Instagram Other students said the group had a “lynch list,” although they did not say what exactly the list meant. Twitter Enlarge. The Girl Effect: The Clock is Ticking. Meet girls who are fighting for their right to an education - The Other Malala's. A university education: what is it worth? As universities get ready to charge students up to £9,000 per year in tuition fees from 2012, does getting a degree still make financial sense? 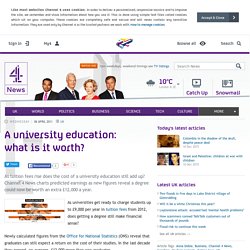 Newly calculated figures from the Office for National Statistics (ONS) reveal that graduates can still expect a return on the cost of their studies. In the last decade they earned, on average, £12,000 more than non-graduates. "This analysis shows there is a big difference between average earnings for graduates and non-graduates," says ONS statistician Jamie Jenkins. The statistics, taken from the Labour Force Survey, show that earnings were around £15,000 for 22-year-olds, regardless of whether or not they had a degree.