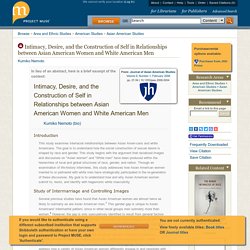 The goal is to understand how the social construction of sexual desire is shaped by race and gender. This study begins with the argument that racialized images and discourses on "Asian women" and "White men" have been produced within the hierarchies of local and global structures of race, gender, and nation. Through an examination of life-history interviews, this study addresses how Asian American women married to or partnered with white men have strategically participated in the re-generation of these discourses. My goal is to understand how and why Asian American women submit to, resist, and identify with hegemonic white masculinity.

Scholars have discussed racial stereotypes as significant components of racialized desires. I conducted interviews in Austin, Texas in 2000 and 2001, with fifteen racially mixed couples and twelve singles who had previously dated interracially. Bard College at Simon's Rock EZProxy Login. 20 Insightful TED Talks About Organizational Culture. What Does It Mean to Be an American ? on JSTOR. Gender Through the Prism of Difference - Pierrette Hondagneu-Sotelo, Maxine Baca Zinn, Amy M. Denissen - Google Books. 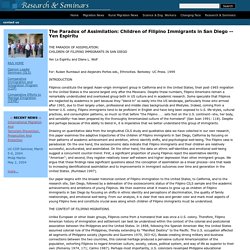 Wolf For: Ruben Rumbaut and Alejandro Portes eds., Ethnicities. Berkeley: UC Press. 1999 Filipinos constitute the largest Asian-origin immigrant group in California and in the United States; their post-1965 migration to the United States is the second largest only after the Mexicans. Despite these numbers, Filipino Americans remain a remarkably understudied and overlooked group both in US culture and in academic research.

Drawing on quantitative data from the longitudinal CILS study and qualitative data we have collected in our own research, this paper examines the adaptive trajectories of the children of Filipino immigrants in San Diego, California by focusing on their patterns of academic achievement and ambition, ethnic identify shifts, and psychological well-being. Unlike European or other Asian groups, Filipinos come from a homeland that was once a U.S. colony. Not all of the contemporary immigrants from the Philippines are professionals, however. Bard College at Simon's Rock. Greenman, Emily “Asian American–White Differences in the Effect of Motherhood on Career Outcomes” Department of Sociology, Penn State University, 211 Oswald Tower, University Park, Sage Journals Web… 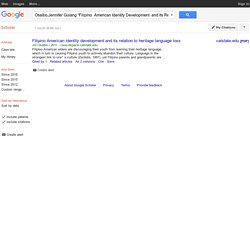