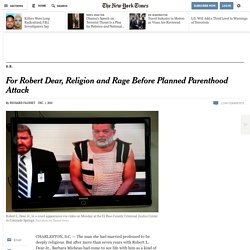 But after more than seven years with Robert L. Dear Jr., Barbara Micheau had come to see life with him as a kind of hell on earth. By January 1993, she had had enough. In a sworn affidavit as part of her divorce case, Ms. “He claims to be a Christian and is extremely evangelistic, but does not follow the Bible in his actions,” Ms. On Friday, according to officials, Mr. But in court documents and interviews with people who knew Mr. “Turn to JESUS or burn in hell,” he wrote on one site on Oct. 7, 2005. A number of people who knew Mr. “He was very proud of himself that he’d gone over and jammed up their locks with glue so that they couldn’t get in,” she said. But another ex-wife, Pamela Ross, said that he did not obsess on the subject of abortion.

One person who spoke with him extensively about his religious views said Mr. Investigators have only just begun to interview Mr. Ms. Planned Parenthood shooting: Suspect said 'no more baby parts' The suspect in a deadly gun attack on a Colorado family planning clinic said "no more baby parts" during his arrest, US media report. 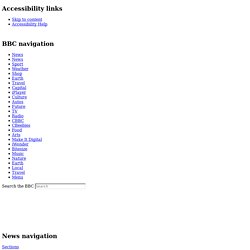 Witnesses say Robert Lewis Dear was motivated by opposition to abortion, according to Planned Parenthood, which runs the clinic in Colorado Springs. Two civilians and a police officer died and nine other people were injured. US President Barack Obama has renewed his call for tighter gun control, saying "enough is enough". Mr Obama's gun control efforts have been opposed in Congress. Mr Dear has been described as a loner who lived in a mountain cabin in North Carolina. Police did not give details on the gun used but in a statement, President Obama described it as "an assault weapon" and talked of ending the "easy accessibility of weapons of war" on America's streets.

Who is Robert Lewis Dear? Image copyright AFP Image copyright AP The suspect's remarks were quoted by an unnamed law enforcement official who spoke to the Associated Press news agency. At the scene. Flight from Death: The Quest for Immortality. A Day Later, Details Emerge On Planned Parenthood Shooting. NPR's Nathan Rott gives the latest rundown on the gunman who shot a Planned Parenthood facility in Colorado Springs. 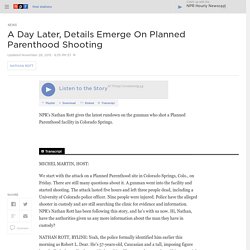 We start with the attack on a Planned Parenthood site in Colorado Springs, Colo., on Friday. There are still many questions about it. A gunman went into the facility and started shooting. The attack lasted five hours and left three people dead, including a University of Colorado police officer. Nine people were injured. NATHAN ROTT, BYLINE: Yeah, the police formally identified him earlier this morning as Robert L. MARTIN: Are we getting any clearer sense of why he did this? ROTT: No, not really. MARTIN: Would you talk for a minute about the three known victims? ROTT: Yeah. MARTIN: Nate, before we let you go, what's next here - what's next in this investigation? ROTT: Well, the investigation's going to be going through the weekend, obviously. 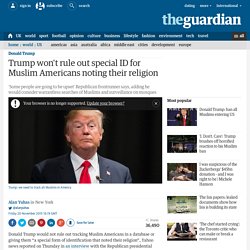 “We’re going to have to do things that were frankly unthinkable a year ago,” Trump told Yahoo. “Some people are going to be upset about it, but I think that now everybody is feeling that security is going to rule.” He said he would consider warrantless searches of Muslims and increased surveillance of mosques. “Certain things will be done that we never thought would happen in this country in terms of information and learning about the enemy.” Asked whether this might mean registering Muslims in a database or giving them a form of special identification that noted their religion, the candidate would not rule it out.

“We’re going to have to look at a lot of things very closely,” Trump said.