Gender Equality in the Arab World

"All I want is an education, and I am afraid of no one." Islamic feminism. Women, girls and Malala: Research on gender and education in Pakistan, and beyond. Malala Yousafzai, the co-recipient of the 2014 Nobel Peace Prize, has been advocating across the world for girls’ educational rights, even in the face of extremely difficult circumstances in her home country of Pakistan, where gunmen attempted to assassinate her in 2012. 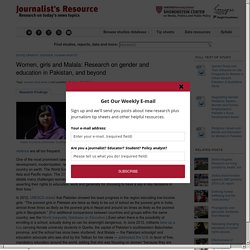 Of course, women throughout the world face a range of challenges, and none more so than in the developing world. Levels of education, health care and political representation can be dauntingly low, and discrimination and sexual violence are all too frequent. One of the most prominent cases of a country struggling with the competing dynamics of development, modernization, religion and tradition is indeed Pakistan, the sixth most populous country on earth. The World Economic Forum ranks the country as the least gender equitable in the Asia and Pacific region. Pakistani women who want to contribute to the economy face other barriers as well. The lack of opportunity for Pakistani women is also a loss for their country.

Are attitudes to rape beginning to change? Egypt was scandalised last summer when an 11-year-old girl named Hend Farghali was allegedly raped by a 21-year-old man. 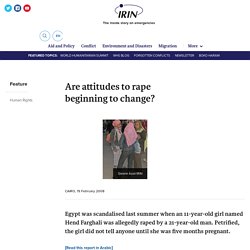 Petrified, the girl did not tell anyone until she was five months pregnant. [Read this report in Arabic] Such extreme cases involving children may be beginning to change attitudes to rape in general which, though illegal, has traditionally been seen as more of a family misfortune rather than a crime. Stories like Hend’s help in opening up the issue for discussion, Lilli Dinesen, clinical director of Cairo’s Maadi Psychology Centre, said.

“We can feel what we want about her being put out there for everyone to see,” she said, “but maybe we need everyone to see and make everyone shocked. “We want to change traditions, but it is not easy,” Rania Hamid, manager of the family counselling unit at the Centre for Egyptian Women’s Legal Assistance (CEWLA), said. The statistics “It’s hard to tell [exactly how many women are raped] because there aren’t a lot of statistics. Sk/ar/cb. Percentages of women who were married before 18 in the Arab World. Ending Child Marriage in the Arab Region. Summary (June 2013) In the Arab region, one in seven girls marries before her 18th birthday.1 Families who marry off their daughters at such a young age may believe that it is in the girls' best interest, not realizing that they are violating their daughters' human rights. 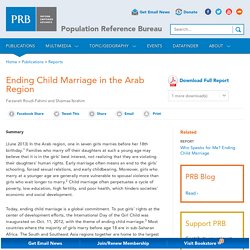 The Rise of the Islamic Feminists. Women protesting in Benghazi, Libya, in 2011 against the Qaddafi dictatorship (Ryan Calder) Throughout the Muslim world, a groundswell of feminist sentiment is growing among women who are seeking to reclaim Islam and the Koran for themselves. 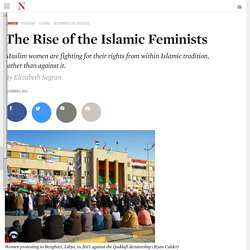 For decades, many women believed they had to choose between their Muslim identity and their belief in gender equality. It was an impossible choice—one that involved betraying either their faith or their feminist consciousness. Four years ago, a global movement called Musawah—“equality” in Arabic—began to make the case that women can fight for justice and equality from within Islamic tradition. Ending oppression in the Middle East: A Muslim feminist call to arms – Opinion – ABC Religion & Ethics. Saudi Arabia's religious police have recently allowed women to ride bikes in parks and recreational areas on the condition that they are accompanied by a male relative and dressed in an abaya. 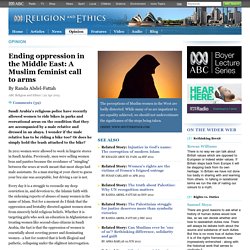 I wonder if the male relative has to be riding a bike too? Or does he simply hold the leash attached to the bike? In 2011 women were allowed to work in lingerie stores in Saudi Arabia. Previously, men were selling women bras and panties because the avoidance of "mingling" between the sexes at work meant that most shops had male assistants. So a man staring at your chest to guess your bra size was acceptable, but driving a car is not. Egypt's first convicted FGM doctor Fadl loses licence. Image copyright Al-Masry Al-Youm A court in Egypt has finally revoked the licence of a doctor found guilty last year of the manslaughter of a 13-year-old girl who died after an illegal female genital mutilation procedure. 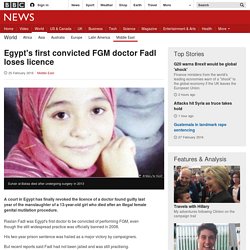 Raslan Fadl was Egypt's first doctor to be convicted of performing FGM, even though the still widespread practice was officially banned in 2008. His two-year prison sentence was hailed as a major victory by campaigners. But recent reports said Fadl had not been jailed and was still practising. Gender Discrimination in the Middle East.