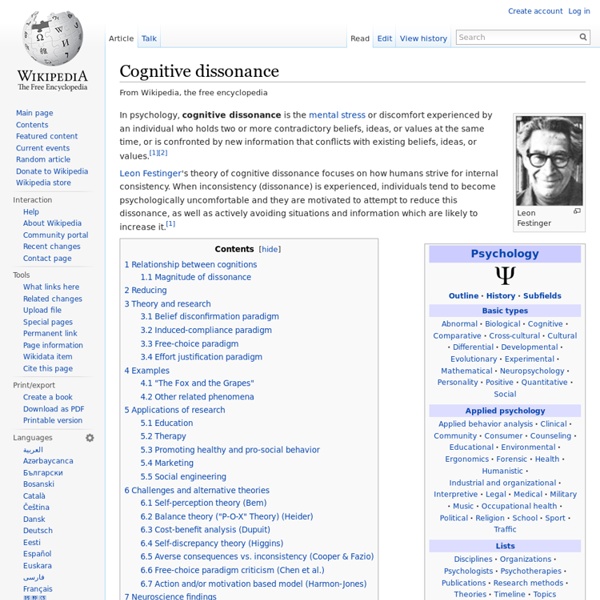 In psychology, cognitive dissonance is the mental stress or discomfort experienced by an individual who holds two or more contradictory beliefs, ideas, or values at the same time, or is confronted by new information that conflicts with existing beliefs, ideas, or values.[1][2] Leon Festinger's theory of cognitive dissonance focuses on how humans strive for internal consistency. When inconsistency (dissonance) is experienced, individuals tend to become psychologically uncomfortable and they are motivated to attempt to reduce this dissonance, as well as actively avoiding situations and information which are likely to increase it.[1] Relationship between cognitions[edit] Individuals can adjust their attitudes or actions in various ways. Adjustments result in one of three relationships between two cognitions or between a cognition and a behavior.[1] Magnitude of dissonance[edit] The pressure to reduce cognitive dissonance is a function of the magnitude of said dissonance.[1] Reducing[edit] E.

Cognitive Dissonance Explanations > Theories > Cognitive Dissonance Description | Research | Example | So What? | See also | References Description This is the feeling of uncomfortable tension which comes from holding two conflicting thoughts in the mind at the same time. China If we explore the Chinese culture through the lens of the 6-D Model, we can get a good overview of the deep drivers of Chinese culture relative to other world cultures. Power distanceThis dimension deals with the fact that all individuals in societies are not equal – it expresses the attitude of the culture towards these inequalities amongst us. Power distance is defined as the extent to which the less powerful members of institutions and organisations within a country expect and accept that power is distributed unequally.

Cognitive Dissonance and learning Cognitive dissonance is a psychological phenomenon which refers to the discomfort felt at a discrepancy between what you already know or believe, and new information or interpretation. It therefore occurs when there is a need to accommodate new ideas, and it may be necessary for it to develop so that we become "open" to them. Neighbour (1992) makes the generation of appropriate dissonance into a major feature of tutorial (and other) teaching: he shows how to drive this kind of intellectual wedge between learners' current beliefs and "reality". Beyond this benign if uncomfortable aspect, however, dissonance can go "over the top", leading to two interesting side-effects for learning:

Cultural Detective Series Content/Packages Cultural Detective® helps you increase productivity, effectiveness, employee satisfaction and profits by building loyalty, teamwork and return on investment. Subscribe to Cultural Detective Online for immediate access to the most robust, process-based, interactive, theoretically-grounded global effectiveness tools available for achieving the results that intercultural competence can bring to your organization. Alternatively the Cultural Detective materials can be licensed as PDFs. Click here to learn what is included in a PDF package. Contact us to inquire about quanitities of 100 or more. Use Cultural Detective to enhance your personal performance, in executive coaching, staff or team meetings to build team competence, in lunch and learns, webinars, and face-to-face learning events.

'The Phenomenology of Spirit' Phänomenologie des Geistes (1807) is Georg Wilhelm Friedrich Hegel's most important and widely discussed philosophical work. Hegel's first book, it describes the three-stage dialectical life of Spirit. The title can be translated as either The Phenomenology of Spirit or The Phenomenology of Mind, because the German word Geist has both meanings. Stockholm syndrome Stockholm syndrome, or capture-bonding, is a psychological phenomenon in which hostages express empathy and sympathy and have positive feelings toward their captors, sometimes to the point of defending and identifying with the captors. These feelings are generally considered irrational in light of the danger or risk endured by the victims, who essentially mistake a lack of abuse from their captors for an act of kindness.[1][2] The FBI's Hostage Barricade Database System shows that roughly 8 percent of victims show evidence of Stockholm syndrome.[3] Stockholm syndrome can be seen as a form of traumatic bonding, which does not necessarily require a hostage scenario, but which describes "strong emotional ties that develop between two persons where one person intermittently harasses, beats, threatens, abuses, or intimidates the other.

UK plc must do its bit for broken Britain Britain has a rubbish infrastructure. The road network gets clogged up and the rail network is a relic of the 19th century. We know this because business bangs on incessantly about the money it is losing through congestion and delay. UK plc is not up to the job, it says.