What Gender Means to Me As a Married Man Who Likes to Wear Women’s Clothing. I’m Gender Non-Conforming – And I Need People to Stop Pressuring Me to ‘Pass’ This article was originally published on EverydayFeminsim.com and is republished with permission. 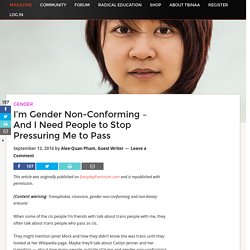 (Content warning: Transphobia, cissexism, gender non-conforming and non-binary erasure) When some of the cis people I’m friends with talk about trans people with me, they often talk about trans people who pass as cis. They might mention Janet Mock and how they didn’t know she was trans until they looked at her Wikipedia page. Maybe they’ll talk about Caitlyn Jenner and her transition — about how many people, outside of trans and gender non-conforming circles, still see her as a man. To most cis people, Janet Mock “passes” and Caitlyn Jenner “fails.” Passing is the term used when a trans person can move through the world without anyone suspecting that they’re trans. If you pass as cis, you’re probably considered more desirable, respectable, and easier to love. For many trans people, passing as cis is the ultimate goal of their gender presentation. 1. 2. 3. 'My Son Wears Heels': One Mom's Story of Raising A Gender Non-Conforming Child. By Gabrielle Olya @GabyOlya Growing up in the U.K., Harnaam Kaur was bullied relentlessly for having facial hair. 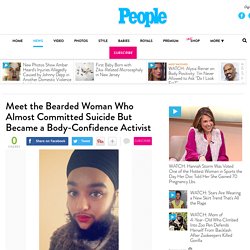 "I was the ugly duckling in my group of friends," she tells PEOPLE. "I remember being bullied by many different people in my primary and secondary school period. The bullies made my life a living hell every day. Kaur, now 24, began growing facial hair as an adolescent due to polycystic ovary syndrome. "I started to wax my facial hair, tweeze it off, thread it off," she says. Because she couldn't remove her hair, her depression over her appearance led her to begin self-harming, and eventually Kaur considered suicide. "One day I decided to actually go ahead with ending my life," she says. But something would not let her go through with it. "I thought about all the negative energy and strength that it actually takes to want to end your own life," says the Berkshire, England, native. 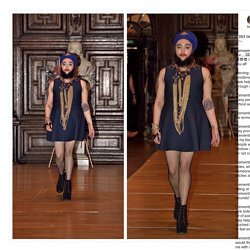 Thank you all! Warning: Content below is personal and may be emotionally triggering for some readers! Always seek help if you or someone you know is going through any kind of abuse! I remember being laughed at everyday in school by many people from all year groups! Everyday in school was dooms day for me! I remember crying my eyes out in the toilets wishing the torment would stop! I remember the teachers listening to my ordeals, they promised a lot but delivered so little!

I remember sitting in the Library and writing suicide notes, which I printed out with the hope that someone would read it. I remember walking by tables and the teenagers sitting at the tables would stab me with their pens! Explaining a Non-Binary Transition. I guess that will be the challenge for Neutrois, the battle for acceptance. 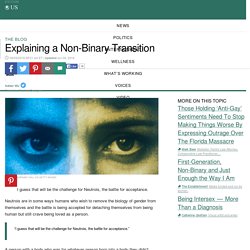 Neutrois are in some ways humans who wish to remove the biology of gender from themselves and the battle is being accepted for detaching themselves from being human but still crave being loved as a person. “I guess that will be the challenge for Neutrois, the battle for acceptance.” A person with a body who was for whatever reason born into a body they didn’t choose to identify with. And it’s not that we don’t love ourselves, we do. Neutrois can be considered Agender, Transgender, Non-Binary, Gender Non-Conforming, and we do love ourselves. Maybe for a handful of us it’s not important whether or not we are attractive, because we aren’t interested in passing. “What all Neutrois have in common is that we are more interested in being understood than being adored or admired.” You see, most people don’t know what cis means. “For me this is less about being attractive, and more about being balanced.”

I Am A Gender Non-Conforming Parent.