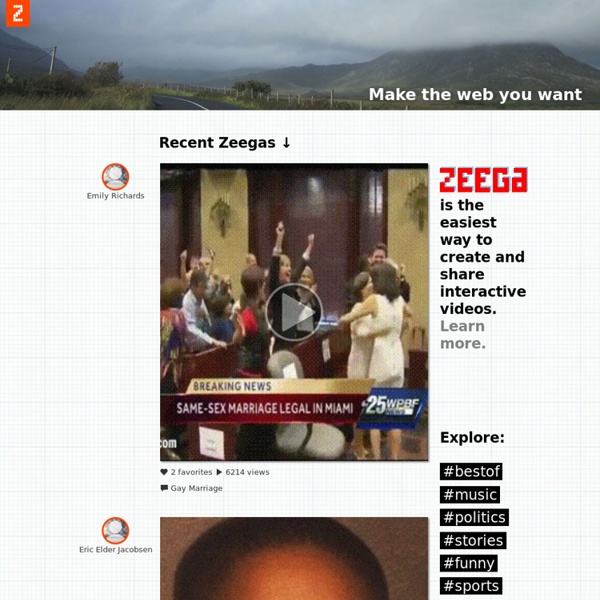 This Was the Year When Everything Became TV In a workplace, other people are there in an ambient way — they drift in, they drift out, there’s an occasional did-you-see-this exchange between tasks. The TV of People doesn’t work that way: Your switch is either on or off. People become episodic. Someone is present until their little rectangle winks off and they disappear.

Creating interactive video from the Course Articulate Storyline Advanced Techniques People dig videos, and people dig interaction. Put those two together, and you usually get a pretty engaging piece of e-learning. In the product section of this course, I have a short video clip that demonstrates the end of the installation process of a solar panel. Friends and enemies in the Middle East. Who is connected to whom? - interactive As the US and UK are set to again commit to military involvement in the Middle East, this interactive visualises the intricate, complex and sometimes hidden relationships and alliances across the region. Its tangled, opened state is meant as a kind of visual joke, showing how its fabric defies simple solutions. You can filter relationship types ‘on’ and ‘off’ in the bottom left and also rollover and click on different players to get a clarified view. Understandably, this is an ongoing, evolving diagram which we hope to add to. So feel free to help us make this diagram more accurate.

Qual é a dieta mais saudável das notícias? Provavelmente mídia tradicional, mas não se empanturre: muito pode deixá-lo menos informado »Laboratório de Jornalismo Nieman What sorts of media diets actually make you more knowledgeable about politics? Is it one packed full of newspaper fiber? High-sugar clickbait? A day full of smartphone snacking, or three square meals? Rapt Media - Tutorial: Creating an Interactive Video Welcome to Rapt Media, the creative platform for Interactive Video. Here you will find a step-by-step tutorial on how to utilize the basic tools for creating an Interactive Video. We will also update this post and interactive tutorial continuously as we develop new features for our interactive video editor. To add media, click the “ADD VIDEO” button in the bottom right corner of the editor. You can upload just about any type of video file. Once you’ve uploaded your media, click and drag your first clip into the start node.

Journalism Tools sur Pinterest Pinterest Today Explore 20 tools and resources every journalist should experiment with Tools have always come from the need to carry out a specific task more effectively. It's one of the main differences between human beings and the rest of the animal kingdom. We may still be slaves to the same old evolutionary urges but we sure know how to eat noodles in style. In journalism, an abstract tool for uncovering the most interesting and insightful information about society, we can generally boil the workflow down to four stages: finding, reporting, producing and distributing stories.