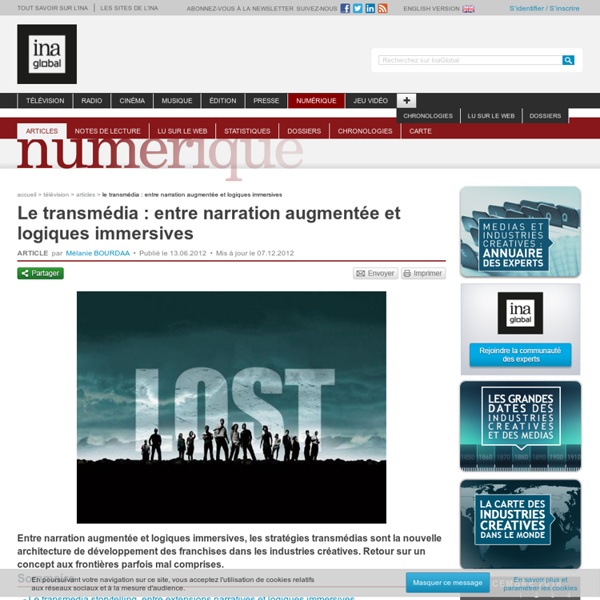 Transmedia Storytelling “Transmedia storytelling” is telling a story across multiple media and preferably, although it doesn’t always happen, with a degree of audience participation, interaction or collaboration. In transmedia storytelling, engagement with each successive media heightens the audience’ understanding, enjoyment and affection for the story. To do this successfully, the embodiment of the story in each media needs to be satisfying in its own right while enjoyment from all the media should be greater than the sum of the parts. Augmented Reality: Here's Our Wishlist of Apps, What's On Yours? There's another dimension present, everywhere we go, that a growing number of technologists are working to uncover. These people aren't talking about theoretical physics or a magical world of fairies and gnomes - they're talking about information that could offer more context to traditionally physical lived experience. Augmented Reality (AR) is the phrase being used and this practice of making layers of data available on top of real world experiences could be a big one soon. Improvements in geolocation, bandwidth, mobile devices and APIs are the foundation of this feeling that a useful Augmented Reality may be more realistic today than ever before. AR isn't new, but it's been pretty hokey so far.

How to Ride a Lion: A Call for a Higher Transmedia Criticism Register now for Transmedia Hollywood, April 6, USC. 2011 C3 Research Memos and White Paper Series edited by Prof. The Transmedia Approach Integration is chaos. With so many agency / channel specialists – clients waste a ton of money paying for redundancies in their big agency fees. Furthermore, when Kellogg wrote the textbook on marketing integration years ago, I know that what they describe in their scenario planning was not what marketers are attempting to pass off as an integrated marketing plan. Today, 'Integrated Marketing' is defined as a multi-channel plan using the same message across all channels. What we know now is that one size does not fit all! The same message or conversation doesn’t work in all media channels.

Transmedia Storytelling: Building Worlds For and With Fans The author's posts are entirely his or her own (excluding the unlikely event of hypnosis) and may not always reflect the views of Moz. John loves Batman. He's collected comics since he was nine years old, is proud of owning the first edition of Gotham by Gaslight, and still remembers the afternoons spent watching the TV series with Adam West at home when he was a kid.

The Transmedia Hierarchy of Needs Have about 22 draft posts sitting in my WordPress Post box, so a bit of catch-up in next week or two to clear some out! Outside of the talk of what ‘transmedia’ actually is, the next key topic of controversy is how can you make money from it vs spending marketing money ‘on it’ to promote a traditional product/project. The Holy Grail at the moment is can we make the ‘multi platform, transmedia form’ an entertainment or service necessity – something worth users putting hands in pockets for (or clicking that PayPal button) and something worth spending the time and effort immersing yourself in – when there are so many other ‘linear’ fragments to graze on? This post therefore looks briefly at a core aspect of transmedia or experience design that is oft left out of the equation, the user need and how we can map out and create transmedia to meet those needs.

transmedia storytelling Undoubtedly, all of the entertainment industries—dance, theatre, gaming, comic books etc—have had to adjust to technological and cultural convergence. The music industry’s decline exemplifies the power of such phenomena. But the television and film industries, though primed to fully transition into the digital age, have neglected to make the quantum leap for two reasons. Engaging with Transmedia Branding: An Interview with USC’s Burghardt Tenderich Early on, Grant McCracken used the example of Mr. Clean to illustrate what might happen as existing brand icons are given greater backstory. But, even in the entertainment industry, there’s been some debate lately about whether Hollywood is providing too much backstory now and whether backstory can bring negative consequences in terms of narrowing rather than intensifying audience engagement. What insights might you share about how much backstory might be needed to build audience interest in a brand narrative and when the backstory is doing damage to the core goal of the advertisement, which is to sell product?

The complete guide to Transmedia Storytelling Estimated reading time: 11 minutes, 8 seconds Every day in our Feedly or Twitter or Facebook or G+ appears a post about how to create relevant content for our website, content that will help us to put our Brand in front of our audience, capturing its attention and generating social engagement and, from a purely SEO point of view, tons of links. What we often see are many individual actions, one for each medium used, which are almost always disconnected between them. Never, or very few times, the posts of the self-defined Content Marketing gurus in our industry, explain how those individual and often disjointed actions in fact form part of a much more complex strategy, how they are just a single molecule of a largest narrative body. And, let me tell you, that’s quite sad, because it is limiting.