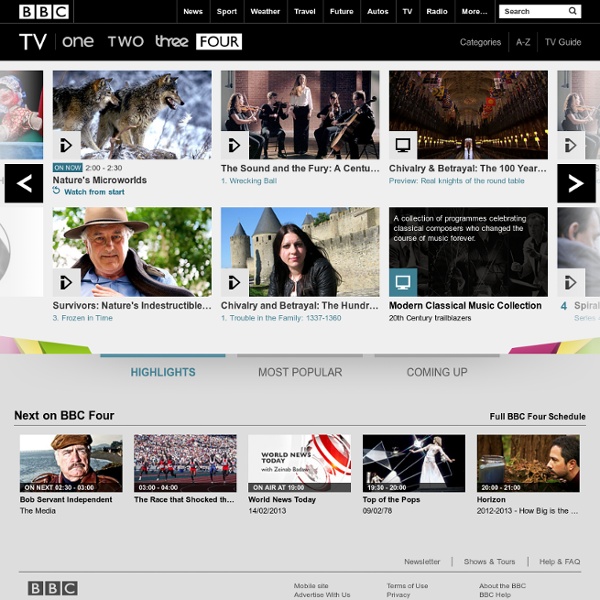 DocumentaryWire | Watch Free Documentaries Online Cuttlefish: the Sentient Cephalopods by Brenna Lorenz All contents copyright © 1998 Brenna Lorenz, Megaera Lorenz, Malachi Pulte. All Rights Reserved.Reproduction of any part of site without express permission is strictly prohibited. All photos of the cuttlefish of Sentosa are by Brenna Lorenz. South of the city of Singapore is an island called Sentosa. One of us suggested that we try talking to them using our fingers as tentacles. We wonder if anyone else has tried talking to the cuttlefish of Sentosa, or any other cuttlefish. Cuttlefish are predacious carnivorous cephalopods related to squid and octopus. Read about Komodo dragons! Published: 11/7/98.Updated: 3/10/01. Sign My Guestbook View My Guestbook Do you want to be informed by e-mail when we add new material to our pages? Visit the rest of our pages! Visitors since 10/29/98: FastCounter by LinkExchange E-mail me!

NAT GEO ADVENTURE – ADVENTURE TRAVEL VIDEOS best.online.docus - Best Online Documentaries Parrot Prodigy May Grasp the Concept of Zero July 15, 2005 A new study suggests that some birds may have a better grasp of numbers than the average three-year-old child. Researchers have shown that an African gray parrot may comprehend the mathematical concept of zero—an abstract notion that human children rarely understand until around four years of age. The concept of zero is surprisingly difficult to grasp, even for people. "There is some understanding of nonexistence that seems to develop naturally, but the actual use of the term 'zero' seems to need to be taught," said comparative psychologist Irene Pepperberg. Pepperberg conducted the study at Brandeis University in Waltham, Massachusetts. The idea of zero as a nonexistent quantity was not obvious to early human cultures, Pepperberg said. Researchers in the United States and Japan have previously shown that chimpanzees and possibly squirrel monkeys can comprehend zero when taught. Zero Sum

"Animal Language Article" Copyright 1995 The New York Times Company The New York Times June 6, 1995, Tuesday, Late Edition - Final SECTION: Section C; Page 1; Column 1; Science Desk LENGTH: 2199 words Chimp Talk Debate: Is It Really Language? By George Johnson PANBANISHA, a Bonobo chimpanzee who has become something of a star among animal language researchers, was strolling through the Georgia woods with a group of her fellow primates -- scientists at the Language Research Center at Georgia State University in Atlanta. Suddenly, the chimp pulled one of them aside. Grabbing a special keyboard of the kind used to teach severely retarded children to communicate, she repeatedly pressed three symbols -- "Fight," "Mad," "Austin" -- in various combinations. Austin is the name of another chimpanzee at the center. "Waa, waa, waa" said the chimpanzee, in what Dr. A decade and a half after the claims of animal language researchers were discredited as exaggerated self-delusions, Dr. Dr. But some philosophers, like Dr.

The Picture of the Napalm Girl - Part 1 and 2 | Documentaries | Deutsche Welle | 16.05.2011 Phan Thi Kim Phuc and Huynh Cong Ut, the photographer Phan Thi Kim Phuc was fleeing the horrors of a napalm attack that destroyed her village and seared the skin from her body. Within days, her picture was in newspapers all over the globe and the haunting image came to symbolize the inhumanity of war. Filmed on location, “The Picture of the Napalm Girl” tells the story of the famous photograph and how it came about. Broadcasting Hours: Part 1: