Your online guide to birds and bird watching 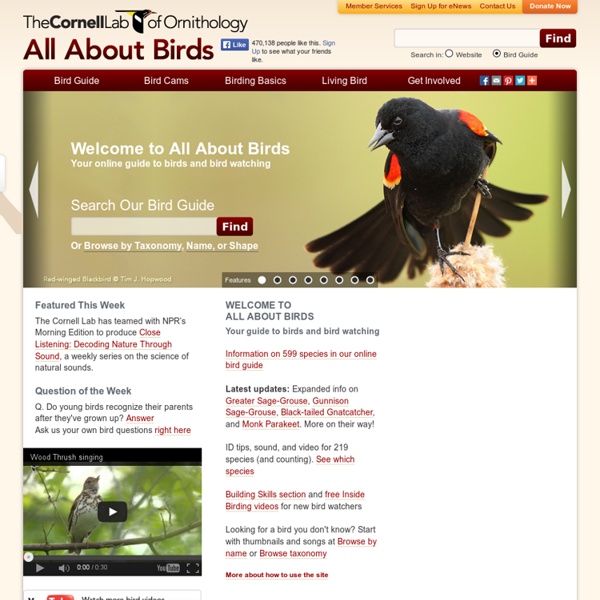 Your guide to birds and bird watching Information on 599 species in our online bird guide Latest updates: Expanded info on Greater Sage-Grouse, Gunnison Sage-Grouse, Black-tailed Gnatcatcher, and Monk Parakeet. More on their way! ID tips, sound, and video for 219 species (and counting). See which species Building Skills section and free Inside Birding videos for new bird watchers Looking for a bird you don't know? More about how to use the site

12 Dozen Places To Educate Yourself Online For Free All education is self-education. Period. It doesn’t matter if you’re sitting in a college classroom or a coffee shop. We don’t learn anything we don’t want to learn. Those people who take the time and initiative to pursue knowledge on their own are the only ones who earn a real education in this world. 15 Rare Wild Cat Species You Never Knew Existed (Photos) Subscribe Share on Facebook Share on Twitter Share Tweet from Psychology: An Introduction by Russ Dewey Psychology: An Introduction Table of Contents Next page Copyright© 2007-2011Russ Dewey

BIRD [site/link_exchange.htm] On this website, you can find the bird checklists of all countries of the world: Just go to In many of them you can find the bird names in its native language as well. But there is much more. 100 Amazing How-To Sites to Teach Yourself Anything Posted by Site Administrator in Online Learning May 7th, 2009 Learning new skills and expanding your knowledge doesn’t have to cost you an arm and a leg. There are loads of free resources on the Web that can help you find instructional videos, tutorials and classes to learn a wide variety of skills from fixing basic car problems to speaking another language. With 100 sites to choose from, you’re bound to find something here that will help you learn just about anything you could want. General Tutorials

IFAW Releases Amur Tiger Zolushka posted By The Rainforest Site The Rainforest Site Today, there are believed to be fewer than 350 Amur tigers left in the wild. With population numbers so low, the success of each individual is critical for the preservation of the species. Recently, IFAW released Zolushka, an Amur tigress that was orphaned as a cub when her mother was likely killed by poachers. IFAW, the International Fund for Animal Welfare worked with partners in far east Russia to rescue and rehabilitate this amazing animal.

How to Detect Lies - body language, reactions, speech patterns Interesting Info -> Lying Index -> How to Detect Lies Become a Human Lie Detector (Part 1) Warning: sometimes ignorance is bliss. After gaining this knowledge, you may be hurt when it is obvious that someone is lying to you. Australian birds attract mates with 'scary movie effect' Using a horror film to bring your date closer is a classic move in the teenage playbook. Now, a study of Australian birds finds that other animals use the same "scary movie effect" to attract female attention, by hitchhiking mating signals onto the calls of predators. Male splendid fairy-wrens, a sexually promiscuous small bird native to Australia, are known to sing a special song each time they hear the call of one of their predators, the butcherbirds.

25 Websites that will make you a Genius. Websites Educational 1. Khan Academy Have you ever wanted to pick up a subject you’re not well-versed in, but you didn’t have the money to invest in a college course? Khan Academy aims to provide education at the collegiate level for anyone who wants it. Video: Wolves Brought Into Yellowstone Park – Nobody Expected This Would Be The Outcome We are all interconnected, not only with each other but with everything. All in nature is alive, it’s life, and all beings on the planet give balance to various cycles mother Earth goes through. When we start jeopardizing these things, and we have, nature becomes out of balance, we do however have the potential to fix and restore the damage that we’ve done to our planet, but we must do it now. Now is our chance to change the direction we were previously heading. This video is a great example of what I am talking about. Take a look, and know the sacredness of all life and how it’s connected to everything else.

Study Catches Two Bird Populations As They Split Into Separate Species A new study finds that a change in a single gene has sent two closely related bird populations on their way to becoming two distinct species. The study, published in the August issue of the American Naturalist, is one of only a few to investigate the specific genetic changes that drive two populations toward speciation. Speciation, the process by which different populations of the same species split into separate species, is central to evolution. But it's notoriously hard to observe in action. This study, led by biologist J. Albert Uy of Syracuse University, captures two populations of monarch flycatcher birds just as they arrive at that evolutionary crossroads.

Birds With Child-care Assistance Invest Less In Eggs An Australian bird has been found to produce smaller, less nourishing eggs when it breeds in the presence of other 'helper' birds that provide child-care assistance. This unique adaptation enables the birds to live longer and breed more often than females without helpers. The research, led by a University of Cambridge academic, was published in Science. In many animal species, parents caring for their offspring are assisted by so-called 'helpers', adults that forego reproduction to help others raise young. Although parents decrease the amount of food they provide to offspring when helpers are present, the additional supply provided by the helpers more than compensates for this reduction.

14 Ways to Acquire Knowledge: A Timeless Guide from 1936 Consider the knowledge you already have — the things you really know you can do. They are the things you have done over and over; practiced them so often that they became second nature. Every normal person knows how to walk and talk.