Decorah Eagles, Ustream.TV: The Raptor Resource Project brings you the Decorah Eagles from atop their tree at the fish hatchery in Decorah, Iowa. The li 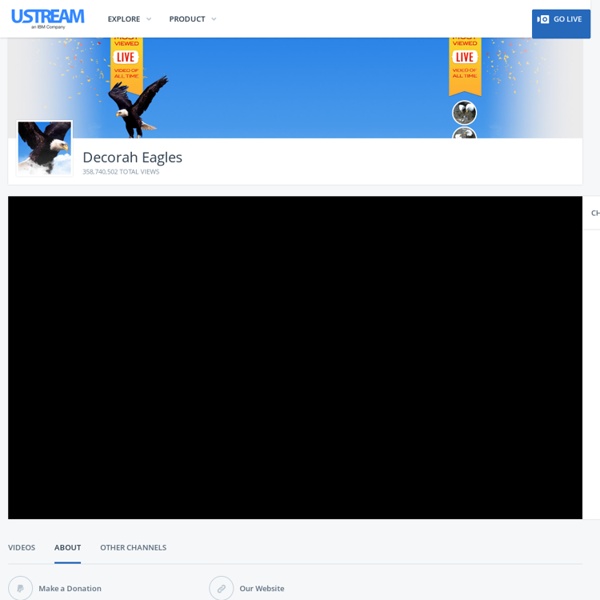 Watch the Decorah Eagles! We have a stream here, but check out **our NEW ADS-FREE STREAM ** at our website: We will be chatting there as well, so be sure to follow the link to see an ads-free stream and to chat with us! This is the Decorah Eagles nest, which is located just south of the city of Decorah near the trout hatchery. For more information about the eagles and their nest, please follow this link: We hope you enjoy watching in 2017 and 2018! Thank you! The Weather Forecast Thanks to A2Z Security Cameras for their help and support with our new HD cameras and to the City of Decorah MetroNet for their help bringing the Decorah N2B nest to the world! About the Raptor Resource Project The Decorah Eagle cam is brought to you by the Raptor Resource Project, which specializes in the preservation of falcons, eagles, ospreys, hawks, and owls. Raptor Resource Project P.

Fake Noah's Ark found on Mt. Ararat : Thoughts from Kansas So Fox News breathlessly reported that Chinese researchers had found Noah’s ark. “Has Noah’s Ark been found on Turkish mountaintop?,” they asked, dumbly. “No,” answered slacktivist.Gawker replied at greater length: A group of evangelicals found some 4,800-year-old wood on top of Mount Ararat. Slacktivist didn’t actually just say “no,” he expanded on the point by noting: The expedition seems to have found a wooden structure. Considering the style of argumentation offered by Noah’s Ark Ministries, he continues: If you had these people read Aesop’s story of the Ant and the Grasshopper and then asked them what the story means, they would reply that it means they should start raising money for an entomological expedition to Greece, because holy cow — talking insects! Atrios was just bemused, wondering: Weren’t there like 15 In Search Of documentaries and even a movie around that time about how they so totally found Noah’s Ark? Oh, yeah. You wish. 1. And then the whole thing collapsed.

Ocean Wilderness (8 photos All photos © Brian Skerry. While on assignment, photojournalist Brian Skerry has lived on the bottom of the sea, spent months aboard fishing boats, and traveled in everything from snowmobiles to canoes to helicopters to get the picture. Skerry, who specializes in underwater and marine-related subjects, pursues stories that will increase awareness about the sea. Above: Aptly called a sea angel, this translucent creature is a snail whose foot has been modified into a pair of swimming wings. In Suruga Bay a strand of whip coral provides habitat for two shrimps, camouflaged among the polyps. Seventy miles southwest of Tokyo, a moray eel slithers through the branches of a soft coral in the cool waters of Suruga Bay. Hunting for morsels of plankton, a school of spadefish hovers near the surface off Japan’s subtropical Bonin Islands. A sand tiger shark off the Bonin Islands will soon give birth.

PARALLAX Depth of Field I have always found "depth of field" a strange term, why not simply call it Depth of Focus? Anyway, it matters not, what does matter is how it affects your photography and how you can use it to your benefit. Personally, I normally set my camera to Av or "aperture priority" 95% of the time for more control over the sharpness. For the kind of work I do, the depth of field is more important to me than shutter speed. Although, if I need a fast shutter speed, I can just quickly and easily whack the aperture right open. giving me the fastest speed. So how does depth of field work? It's all to do with how much light enters your camera and the type of lens that you use. Focal length of the lens To put it simply, the shorter the focal length, the greater the DOF (or more of the image will be sharp). Distance between camera and subject Aperture setting The aperture setting has the largest factor in determining the depth of field of your images. Lastly, this image shows the other extreme.

Dog Breed Info Center®, DBI Home Facials - Get Natural Skincare Ideas at WomansDay.com Facials are a great way to keep your skin glowing, but they can be pricey. We asked Louisa Macan-Graves, author of Hollywood Beauty Secrets: Remedies to the Rescue, and Elda Argenti, owner of the Plantogen skincare line, for their favorite make-at-home face masks crafted from common household ingredients. For All Skin Types Brighten: Cut a slice of ripe papaya and remove the seeds and pulp (save the pulp for a snack later—it’s great for digestion). Exfoliate: Combine 1 tsp honey and 1 tsp olive oil. Cleanse: “Believe it or not, I love to cleanse with oil,” says Argenti. For Oil- and Blemish-Prone Skin Lift & Tighten: Combine 2 Tbsp plain yogurt with 1 Tbsp fresh lemon juice (the juice of one lemon) and apply to your cleansed face and neck. Tone: This toning eye treatment helps to “de-puff, relax, refresh and energize your skin,” says Argenti. For Dry Skin Soothe: Combine 2 Tbsp honey with 1 Tbsp apple cider vinegar or lemon juice. WD on TV: Make Your Own Beauty Products

Top 6 Sites that Inspire and Educate If you’re a professional who likes to be intellectually stimulated and you enjoy keeping up with the latest news and breaking trends, the internet provides you with an endless choice of carefully curated sites to visit. Today, we bring you six of them that we believe are leaps and bounds above the rest. These sites will not only educate you on topics ranging from business and technology to art and design, they’ll motivate you to find your own, original ideas and see them through. TED is short for three incredibly important subjects in our modern world; technology, entertainment and design. Tip: Download TED’s free iPad app to browse through 800 videos by date, popularity or keyword. 2. Brain Pickings started from very humble beginnings. Tip: With over 63K Twitter followers, Brainpicker has a strong audience…and for good reason. Though focused on design, advertising, and technology, PSFK is a must-read for anyone who wants to be on the cusp of new trends and emerging ideas. 4. 5.

Do you come here often? Heart-warming image of gorilla making friends with duckling among wildlife photography award winners By Daily Mail Reporter Updated: 11:06 GMT, 9 June 2011 It was a scene that perhaps wouldn't have made the final cut of King Kong. This lowland gorilla shares a moment of quiet reflection with a tiny mallard duckling, who seems fairly nonplussed about being in the presence of one of nature's most powerful beasts. The heart-warming image is among Nature's Best Photography Magazine's wildlife photograph winners for 2010. A stunning image of a frolicking bear in the woods and a dramatic scene of a hummingbird facing down a deadly viper were also among the winners of the competition, which received more than 25,000 entries. The awards began with simple yet dynamic goals: to celebrate the beauty and diversity of nature through the art of photography, and to use it as a creative tool for encouraging greater public interest in outdoor enjoyment and conservation. Zoos And Aquariums: Tom Warren Western Lowland Gorilla and Mallard Duck, Bronx Zoo, New York, U.S. Grand Prize: Peter Cairns (above) Ben Hall