Olympic National Park: One of the wildest places left in the USA [36 PICS] 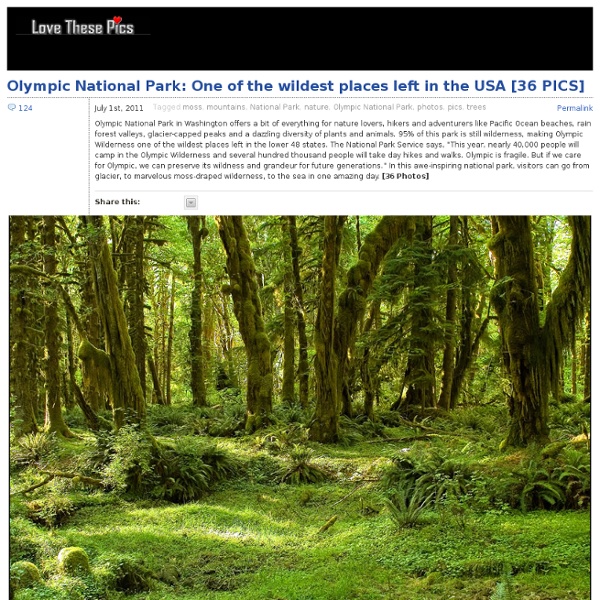 15 Places To Download Free High Quality Stock Photos There are many free stock photography sites. I set out to find as many good ones as I could. I found 15 good, solid resources out there. Royalty Free does not mean the images are free; it means that you don’t need to pay the photographer a royalty each time you use the image. The Mind-Blowing Mount Roraima Mount Roraima is the highest of the Pakaraima mountain chain in South America and one of the world’s most extraordinary natural geological formations. The 31 square kilometer summit area of Mount Roraima is defined by 400 meter tall cliffs on all sides and includes the borders of Brazil, Venezuela, and Guyana. The tabletop mountains of the Pakaraima’s are considered some of the oldest geological formations on Earth, dating back to over two billion years ago. The result is the staggering landscape of Mount Rariama which we tour below in photographs and video:

Crystal River - The most beautiful river on earth [Pics] Cano Cristales - Crystal River. River of five colors, as the locals call it, originates in the south of the mountain chain Macarena, Colombia, and flows eastward to its confluence with the Guayabero river. In the Cano Cristales found five colors: yellow, blue, green, black and red. The Stunning Glasswinged Butterfly Sep 23, 2011 Photograph by SWAMIBU The Glasswinged butterfly (Greta oto) is a brush-footed butterfly, and is a member of the subfamily Danainae, tribe Ithomiini, subtribe Godyridina.

Plitvice Lakes National Park, Croatia The stunning Plitvice Lakes National Park lies in the Lika region of Croatia. The park is surrounded by the mountains Plješevica, Mala Kapela, and Medveđak, which are part of the Dinaric Alps. The 16 blue-green Plitvice Lakes, which are separated by natural dams of travertine, are situated on the Plitvice plateau. Waterfalls connect the lakes, and the tallest waterfall is Veliki Slap at 70 meters (230 feet) tall. The Plitvice lakes area boasts a large variety of interesting and colorful flora and fauna. Visitors can enjoy walking and hiking the many pathways and trails, or exploring the lakes by boat.

Plitvice, a watery paradise in Croatia In recent years, Croatia has changed from a relative unknown to one of the trendiest destinations in Europe. To a great extent this is due to the country's rocky littoral, which, washed by the Adriatic, is considered one of the most beautiful of the Mediterranean coastlines. Then there is the rich history and cultural heritage of medieval towns such as Dubrovnik, Split and Sibenik. But the well-deserved popularity also depends on the protected natural areas, which make up some ten per cent of the country's area. Eight areas enjoy national park status – a very high number for a relatively small country. Of these, Plitvice is the best known. Pictures taken by the Hubble Space Telescope The Hubble Space Telescope was deployed from the Space shuttle Discovery during STS-31 on April 25, 1990. Since then, there have been 5 servicing missions that continued to upgrade the telescope's scientific instruments and operational systems. Hubble reached a major milestone, its 20th anniversary in orbit, on April 24, 2010. Hubble imagery has both delighted and amazed people around the world and has rewritten astronomy textbooks with its discoveries.

Lofted Forest Home: Organic Curves & Natural Materials Good things come to those who wait – particularly in a work of uniquely detailed and highly curved architecture. Nearly a decade in the making, this structure by Robert Harvey Oshatz is much like a tree house – lofted toward the top of the canopy around it – only bigger, grander, more complex and curved than most any tree house in the world. The perimeter of the structure is pushed out into the forest around it, curving in and out to create views as well as a sense of intimacy with the coniferous and deciduous tree cover. The wood and metal detailing is incredible in its variety and customization – each piece designed to fit a particular form and function.

Private House in Tinos photo (c) Yiorgos Kordakis There is a symbolic island, a gem with the essence of calmness and serenity in Cyclades, Greece. Its beauty is picturesque and it reminds you of all that is idealic. This heaven is Tinos. On this island we discovered a private house designed by Greek Zege architects which represents all that Tinos stands for.