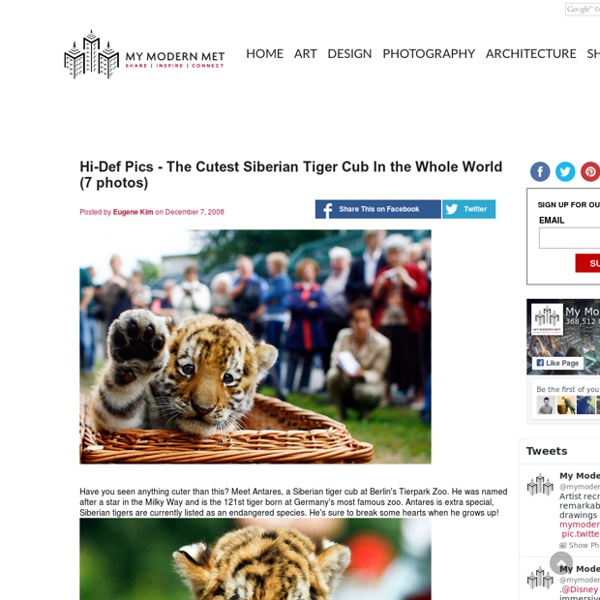 Have you seen anything cuter than this? Meet Antares, a Siberian tiger cub at Berlin's Tierpark Zoo. He was named after a star in the Milky Way and is the 121st tiger born at Germany's most famous zoo. Antares is extra special, Siberian tigers are currently listed as an endangered species. He's sure to break some hearts when he grows up! Courtesy of etoday More Hi-Def Pics: 10 Most Beautiful Sunsets Gorgeous Winter Trees (10 pics) World Animal Day (18 photos) Strikingly Beautiful Shots of Etosha National Park, Namibia (13 photos) Earth From Above: Stunning Images (22 photos) Strikingly Beautiful Landscapes (8 photos) Tags:antares, berlin, cub, germany, hi-def, pics, siberian, tierpark, tiger, zoo Email me when people comment – Scroll

Adorable Portraits of Pollen-Covered Bats Taken by the World's Leading Bat Expert Bats are some of the most fascinating and misunderstood creatures in the world, and few know this better than Merlin Tuttle, the world's leading bat biologist and photographer. If you've ever seen a fantastic photo of a bat in a newspaper article, book, or anywhere else, chances are that Tuttle took it. The founder of Bat Conservation International, Tuttle has spent nearly his entire life working for the conservation of bats, who are often hunted and feared despite playing a vital part in nature. His passion sprouted as a teenager living in Tennessee in the 1950s, when Tuttle managed to prove that gray bats are migratory, contrary to what textbooks and scientists said at the time. How does Tuttle manage to get so close to his nocturnal subjects with his camera and flash? Merlin Tuttle: Website My Modern Met granted permission to use photos by Merlin Tuttle.

Top 5 Biggest Domestic Cats | Cats Around The Globe And by big cats we don’t mean lions and tigers, although those are awesome too, but we’ll take a look at domestic pets. What if you just want more to love? check out this list. 5. Siberian Siberian Forest Cats originate from Russia, their thick and long coats protect them from cold climates. 4. Closely related to the Siberian cat, the Norwegian Forest cat shares many of its characteristics. 3. There are many legends about this impressive Goliath. 2. Rag-dolls are one of the biggest breeds around. 1. At the top of the list we find the Savannah F-1. Check out our other CAT TOP 5 LISTS The size of a any specific cat will also depend on their heritage and gender, there are some Maine-coons that get bigger than Rag-dolls and vice versa. Share it on your favorite social network! If you like this then you should also check out:

Manul – the Cat that Time Forgot Have you ever wanted to take a trip through time to see what animals looked like millions of years ago? When it comes to cats there is little or no need. This beautiful specimen is a Manul, otherwise known as Pallas’s Cat. About twelve million years ago it was one of the first two modern cats to evolve and it hasn’t changed since. The other species, Martelli’s Cat, is extinct so what you are looking at here is a unique window in to the past of modern cats. Although the Manul is only the size of the domestic cat, reaching about 26 inches in length its appearance makes it appear somewhat larger. The main reason for its survival throughout the ages has been its isolation. Take a close look at the eyes of the Manul. It also has a much shorter face than other cats, which makes its face look flattened. The Manus has not been studied a great deal in the wild, where it is classified as near threatened. Don’t rush to your local pet store, however.

Kangaroos have three vaginas We interrupt your regularly scheduled news programming to bring you this wonderful piece of trivia about kangaroo genitals. Regular readers will know of my love for Inside Nature’s Giants, the British documentary where anatomists cut up large animals to examine how their bodies work and evolved. It’s a truly incredible show, combining unbridled joy at the natural world, drama, and solid educational value. So far, it has brought us the horrifying throat of a leatherback turtle, the mysterious bloodsweat of a hippo, and the exploding insides of a beached whale. But this week’s episode may have topped all of that with the triple vaginas of the female kangaroo. This set-up is shared by all marsupials – the group of mammals that raise their young in pouches. Note that the ureters, which carry urine from the kidneys to the bladder, pass through the gaps between the three tubes. With its complicated reproductive set-up, a female kangaroo can be perpetually pregnant.

Werewolf Cats Lykio Cats is a new breed of kitty that looks like a werewolf. It’s some kinda mutant that doesn’t grow a full fur coat. Basically Cruella DeVil would not approve. Via: Geekologie The Rare White Lion, a photo from Attiki, Attica Critiques | Translate carper hoi Panos, This is a great head of a lion. My compliments for it. quegardens In this and other of your wonderful shots Panos,you bring out great expression in the eyes of your subjects.Those soft welcoming eyes could be decieving though....I wouldn't want to get too close:-)Great focus on where it matters most. Edwin A nice portrait Panos. dob_31 Excellent additionto the "Fauna" theme. cdewet Hi Panos, Yes, from Timbavati stock. santosh Wow.. dsidwell Crystal clear, Panos! Surfer31 Wonderfull snap, you captured such a wild animal in such a relaxed mood, I love the contrast. gepall Fantastic expression and capture. guyben Excellent Panos ! danbachmann Absolutely fantasitc portrait. Dingo Everything has been said already... one of my favourite pics, Panos. kikvel Heyyy! justa Amazing view, great animal, his eyes.... wonderful.... ckradolfer jdwyer264 A beautiful cat, a lovely sharp capture. Hellas Hi Panos, it is a very nice portrait, indeed. waseemkhan fredon regards fred david_P