Manul – the Cat that Time Forgot 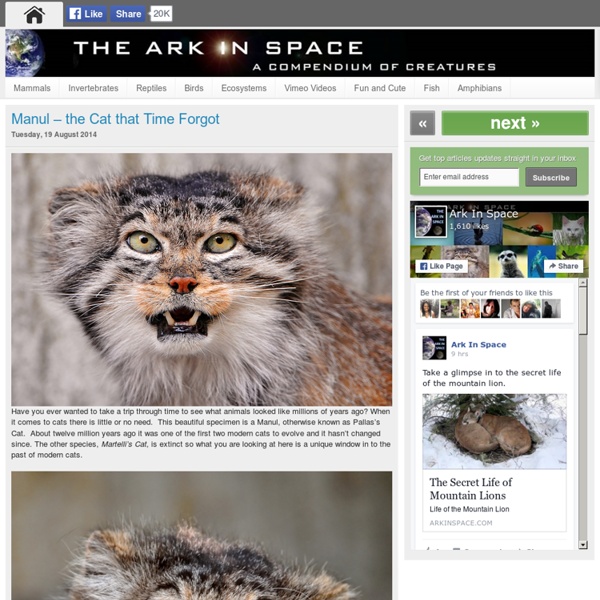 Have you ever wanted to take a trip through time to see what animals looked like millions of years ago? When it comes to cats there is little or no need. This beautiful specimen is a Manul, otherwise known as Pallas’s Cat. About twelve million years ago it was one of the first two modern cats to evolve and it hasn’t changed since. The other species, Martelli’s Cat, is extinct so what you are looking at here is a unique window in to the past of modern cats. Although the Manul is only the size of the domestic cat, reaching about 26 inches in length its appearance makes it appear somewhat larger. The main reason for its survival throughout the ages has been its isolation. Take a close look at the eyes of the Manul. It also has a much shorter face than other cats, which makes its face look flattened. The Manus has not been studied a great deal in the wild, where it is classified as near threatened. Don’t rush to your local pet store, however.

Combine Smalls to Make Large Bulletin Board Home » $10 and Beyond, Decor, Headline, Office Crafts, Tutorials 5 April 2010 72,875 views 8 Comments by heather Most things you get at the dollar store are not huge. [inspiration image: pottery barn] Project Materials: Six bulletin boards, $1Stencils (cut your own), on handAcrylic paint, on hand or $.50Sash rod (optional), about $1.50 each - comes in a package of 2Glue or duct tape to attach the frames, on hand Total: $6 and up To make a big bulletin board, I bought six of the small framed bulletin boards I found in the office supplies section of the dollar store and attached them. Before I attached the frames together, though, I added a couple of stencils, inspired by the PB example. After the bulletin boards were attached, I installed a sash rod (to hold my placemat mail sorter). The PB rustic wall organizer is a lot bigger than my dollar store version, but you could easily add a few more dollar store bulletin boards. p.s. (Because I used the electric screwdriver/drill for the first time!

The Dandelion - Whimsical World-Wide Weed The humble dandelion. From your garden to almost the ends of the earth this small but conspicuous plant flourishes. Gardeners do not appreciate its presence, considering it a weed, even though its flowering usually indicates the beginning of the honey bee season and could be seen as a welcome sign. Its simplistic looking structure hides a few surprising secrets and its cultural resonance, especially in Europe is strong. Here is a short but sincere homage to one of the small wonders of our botanical world. Let’s start with the names, both common and scientific. In fact it is so called because of its leaves, which have a coarse-toothed edge and as such reminded the medieval mind of the teeth of lions. Slightly less flattering is alternative name, again French. It is somewhat indicative of our somewhat schizophrenic attitude towards the plant that the North-Eastern Italians refer to is as ‘pisacan’ – which refers to dogs, pavements and urine! Its genus is Taraxacum and it is a large one!

Crystal Egg Geodes - Martha Stewart Easter Geodes can be grown without using egg dye. The resulting crystals are clear to milky white, like quartz. While large chicken eggshells are suggested in this process, larger eggshells can be used. This Easter craft from Jim "Figgy" Noonan doubles as a science project, offering an opportunity to show kids the crystallization process at work. Resources: If you don't want to blow your own egg or would like to try a larger eggshell, pre-blown shells are available from The Eggery Place.

Ecosphere Associates, Inc.: Closed Ecosystem, Self Contained Aquarium QUOTES TO EMPOWER AND INSPIRE WOMEN 86 Flares Facebook 0 Twitter 0 Google+ 46 StumbleUpon 1 Pin It Share 39 39 86 Flares × A Lady Knows How To Play The Game Quotes to Empower and Inspire Women benefit all of us, regardless of gender. In most developed or developing countries, women basically have the same rights as men. But despite the wonderful changes in the way our society works, we, women, still have many reservations when it comes to asserting our power and individuality. “A woman is like a tea bag: you cannot tell how strong she is until you put her in hot water.” “Don’t compromise yourself. “Figure out who you are separate from your family, and the man or woman you’re in a relationship with. “Our deepest wishes are whispers of our authentic selves. “Always be a first-rate version of yourself, instead of a second-rate version of somebody else.” “We are all pencils in the hand of God writing love letters to the world.” “Well-behaved women rarely make history.” “Women who seek to be equal with men lack ambition.”

Strange and Bizarre Creatures Featured, Science — By BB Admin on January 12, 2011 4:53 pm Human beings seek out the strange and unusual in books, movies, television, video games, and comic books. We dive headfirst into the worlds of C.S. Lewis, of Lewis Carrol, of Tolkien, of World of Warcraft, of superheroes, delighting in the magical things those skilled authors managed to think up. Sometimes we forget that the world we live in is just as weird, magical, and bizarre as the worlds we escape to. Take, for instance, some of the amazing creatures that exist in our world. Naked Mole Rat This is the Naked Mole Rat. “Horror” Frog OK, it’s weird enough that this frog looks hairy. Angora Rabbit These furry creatures are mainly bred for their fabulous coats, which I think it super wrong. Pangolin The Pangolin is the only mammal that has scales. These guys also have very long tongues that extend internally all the way into their tummies. Chinese Giant Salamander Ew, right? Star Nosed Mole Komondor Dog Hungarian. Glass Frog Axolotl

The Barn Owl Trust patchy's Lost In The 50s Oldies JukeBoxes ~ real audio music .s ''close your eyes baby, follow my heart, call on the memories, here in the dark,we'll let the magic take us away, back to the feelin's we shared when they played ..'' music that moves me ... or makes me wanta move ... or both. this Oldies site is filled with music ''mainly'' from the 50s and 60s. you will not find graphic images of the era,but .. you will have the memory images you bring with you .. or the images the music will create behind your eyes. come on, let's go get LOST .... s slooking for John P Kee,Sam Cooke, Statler Bros, Christy Lane? sorry, patchy does not provide Computer or Program Tech Support or Web Site Construction Services.if you are unable to play the Jukes, you can only be advised that your Browser should have a real audio player or compatible player installed and be Java/JavaScript Enabled.

WHAT A BEAUTIFUL ANIMAL---@WE MUST TO SAVE THEM. by fiatvoluntas Jul 12