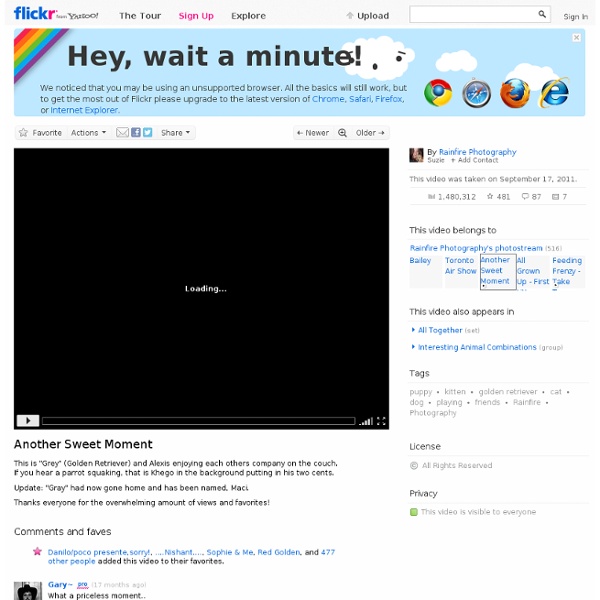 Book Country: Discover New Fiction with the Genre Map Editors, booksellers, and readers describe books by their literary categories, or genres. It's how books are placed in stores and sold online. It's how readers discover your book. As a writer, knowing your book's category is essential to finding an audience. 65 Beautiful Fonts You Can Download For Free Freebie 65 Beautiful Fonts You Can Download For Free by Alex on Aug 9, 2012 • 9:43 am 17 Comments There are so many free fonts all around the web these days and sometimes it makes me think is their any really point purchasing fonts. Ancient Domesticated Dog Skull Found in Siberian Cave If you think a Chihuahua doesn't have much in common with a Rottweiler, you might be on to something. An ancient dog skull, preserved in a cave in the Altai Mountains of Siberia for 33,000 years, presents some of the oldest known evidence of dog domestication and, together with equally ancient dog remains from a cave in Belgium, indicates that domestication of dogs may have occurred repeatedly in different geographic locations rather than with a single domestication event. In other words, man's best friends may have originated from more than one ancient ancestor, contrary to what some DNA evidence previously has indicated. "Both the Belgian find and the Siberian find are domesticated species based on morphological characteristics," said Greg Hodgins, a researcher at the University of Arizona's Accelerator Mass Spectrometry Laboratory and co-author of the study that reports the find. Radioactive carbon, or carbon-14, is one of three carbon isotopes.

Dog Overjoyed to See "Mom" Home From War Video Log in Cutest Animals Cynthia Yildirim Dog Overjoyed to See "Mom" Home From War Recorded on January 12, 2011 using a Flip Video camera. US Air Force Captain sees her 8 and a half year old pup, Molly, at the airport. My collection of funny emails from my inbox. Subject: 5 MINUTE MANAGEMENT COURSE Lesson 1: A man is getting into the shower just as his wife is finishing up her shower, when the doorbell rings. The wife quickly wraps herself in a towel and runs downstairs. A dog's seeing eye dog Lily is a Great Dane that has been blind since a bizarre medical condition required that she have both eyes removed. For the last 5 years, Maddison, another Great Dane, has been her sight. The two are, of course, inseparable. (via Weird Universe, Daily Record, The Sun)

Orangutans use Apple iPads for fun and 'mental stimulus' Since Apple launched the iPad, it’s become integrated into our daily lives. It's not merely a communication or entertainment tool – the iPad is used by commercial pilots to access flight plans and cut down on paper, by enterprises (such Ford where salesmen use sales apps) and in education to encourage interactive learning. The latest creative use of the iPad is to study animal behaviour in orangutans. External Tip - 10 Advanced Photoshop Tutorials You Should See In this category we want to give you an advice to other great sites, where you can get a lot of very useful information, inspirations and materials. Here I collected 10 great Photoshop tutorials, which can help you to expand your skills. Create a Devastating Tidal Wave in Photoshop Create Quick Particle Effect on Photo via Custom Brush Options in Photoshop

New York City's Hidden Subway Station Deep in the belly of New York’s subway system, a beautiful untouched station resides that has been forgotten for years with only a limited few knowing of its existence. Stunning decoration with tall tiled arches, brass fixtures and skylights run across the entire curve of the station, almost a miniature imitation of Grand Central Station… But it sounds like something straight out of Harry Potter, right? It was opened in 1904, with the hope of making it the crowning glory of the New York subway system in elegant architecture and a place for commemorative plaques to honour the work that had resulted in such a successful underground mass transit system. It was to be the original southern terminus of the first ‘Manhattan Main Line’; however the station was closed and boarded up in 1945.

Relationship Rules Human beings crave intimacy, need to love and be loved. Yet people have much trouble doing so. It's clear from the many letters I get that lots of folks have no idea what a healthy relationship even looks like. Because I care about these things, and care about the environments children grow in, I'm using this space as an attempt to remedy the problem—again. From many sources and many experts, I have culled some basic rules of relationships. This is by no means an exhaustive list.