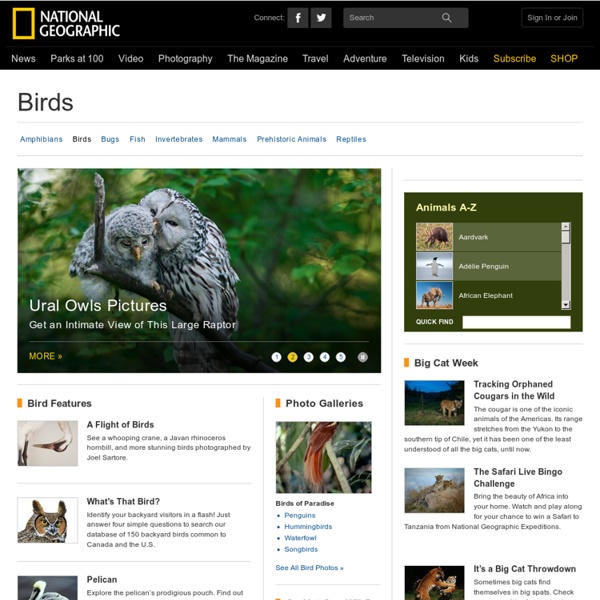 Amphibians Facts | List Of Amphibians | Amphibians Pictures What Makes an Amphibian? Amphibians are animals that live part of their lives in water and part on land. They usually have soft, moist skin that is protected by a slippery layer of mucus. They also tend to live in moist places or near water to keep their bodies from drying out. All amphibians: Are vertebrates (which means they have a backbone or spine)Are ectothermic. Avibase - La base ornithologique mondiale I am excited to announce a new important addition to Avibase, called myAvibase. This is a new section of the site that provides tools for planning your next birding trip and manage your own personal checklists. You can use maps and graphs to quickly see how many species can be found in a given region and at various times of year, for instance. People who participate in eBird can very simply import their lifelist from their eBird account with a click of a button.

Fun India Facts for Kids - Interesting Information about India India is officially known as the Republic of India. India has the second largest population in the world, with over 1.2 billion people (1,205,073,612 as of July 2012). India is the seventh largest country by total area. India belongs to the continent of Asia, it is bordered by the countries of Bangladesh, Bhutan, Burma, China, Nepal, and Pakistan. The highest mountain in India is Kanchenjunga, standing at 8,598m (28,209 ft), which it shares with Nepal. Kanchenjunga is the third highest mountain in the world. All About Amphibians © Contributed by Leanne Guenther Photo Source: Corel Web Gallery The word amphibian means two-lives. Amphibians spend their lives in the water and on land. Bullfrog tadpole. All amphibians begin their life in water with gills and tails. Photo Source: Corel Web Gallery Amphibians are cold-blooded, which means that they are the same temperature as the air or water around them. Fire SalamanderPhoto Source: Wikipedia (Public Domain) User - Emilisha There are more than 4,000 different kinds of amphibians. Frogs (more amphibians) >

Beetles (Order: Coleoptera) - Amateur Entomologists' Society (AES) Possibly the most well known of Britain's beetles, the Stag beetle Lucanus cervus. The males have large 'antlers' and this gives them their common name. The smaller female does not possess large antlers. Introduction The Order Coleoptera or beetles forms the largest group of insects worldwide with about 370,000 described species. However, the situation in the British Isles is slightly different and beetle diversity comes third with about 4,100 species, being surpassed by both Diptera (flies) and Hymenoptera (bees, wasps, ants, etc.). General features Beetles belong to the Endopterygota or insects having a complete metamorphosis, with a distinct pupal stage between the larval and sexually mature adult stages. Beetles can be found in almost every imaginable terrestrial or aquatic habitat but many more species are found in tropical countries than in places with more temperate climates. Special features A number of beetle species are dependant upon other insects for their survival. Setting

India Have a go at some of our Indian-themed crafts for children for a real flavour of India! We've... India is such a vibrant, colourful, exciting country, with so much to explore and discover. We are... We've got a lovely colouring page of two Indian children in traditional costume for the kids to... Did you know that Chess originated in India? We've got Indian flag printables for your classroom projects or to decorate your home, perfect...

Reptiles and Amphibians of Ontario | A New Ontario Reptile and Amphibian Atlas | Species | Protect | Ontario Nature Other names: common mudpuppy, waterdog The mudpuppy is the only completely aquatic salamander in Canada. It is also the largest salamander species in the country. Characteristics Mudpuppies are grey to rusty brown on top with dark blue spots and a grey belly. They have red, feathery external gills and only four toes on both the front and hind feet. Similar Species Given their large size, mudpuppies cannot be confused with any other salamander. Habitat Lakes, rivers, streams and other large bodies of water are prime mudpuppy habitat. Biology The mudpuppy breeds in the spring. Mudpuppies are primarily nocturnal (most active at night). Threats & Trends Poor water quality is a perennial threat to many animals, but especially to totally aquatic ones like the mudpuppy. Anglers occasionally catch mudpuppies, especially in the winter, possibly because ice-fishing for whitefish (a bottom feeder) brings baited hooks down to the mudpuppy’s domain. Current Status & Protection Back to top

Annuaire des oiseaux India Country Profile HISTORY India's earliest known civilization arose about 5,000 years ago on the Indus River in what is now Pakistan. Archaeologists uncovered the remains of two huge cities with brick houses, piped water, and sewer systems. Nobody knows why, but these cities, called Harappa and Mohenjo Daro, were abandoned in 1700 B.C. The Aryan people were farmers from Central Asia who arrived in India around 1500 B.C. In the 200-year reign of the Gupta Empire, starting in the fourth century A.D., arts, crafts, and sciences flourished. Beginning in the 16th century, following a series of invasions by Muslim forces, a Mongol leader named Babur founded the Mongol Empire. In the late 1400s, Europeans arrived in India and began setting up trading companies.

Common mudpuppy The common mudpuppy (Necturus maculosus) is a species of salamander in the genus Necturus.[2] They live an entirely aquatic lifestyle in the eastern part of North America in lakes, rivers, and ponds. They go through paedomorphosis and retain their external gills.[3] Because skin and lung respiration alone is not sufficient for gas exchange, mudpuppies must rely on external gills as their primary means of gas exchange.[4] They are usually a rusty brown color[5] and can grow to an average length of 33 cm (13 in).[6] Mudpuppies are nocturnal creatures, and only come out during the day if the water in which they live is murky.[2] Their diets consist of almost anything they can get in their mouths, including insects, earthworms, mollusks, and annelids.[5] Once a female mudpuppy reaches sexual maturity, at six years of age, she can lay an average of 60 eggs.[5] In the wild, the average lifespan of a mudpuppy is 11 years.[7] [6] Appearance[edit] Distribution[edit] Diet[edit] Reproduction[edit]