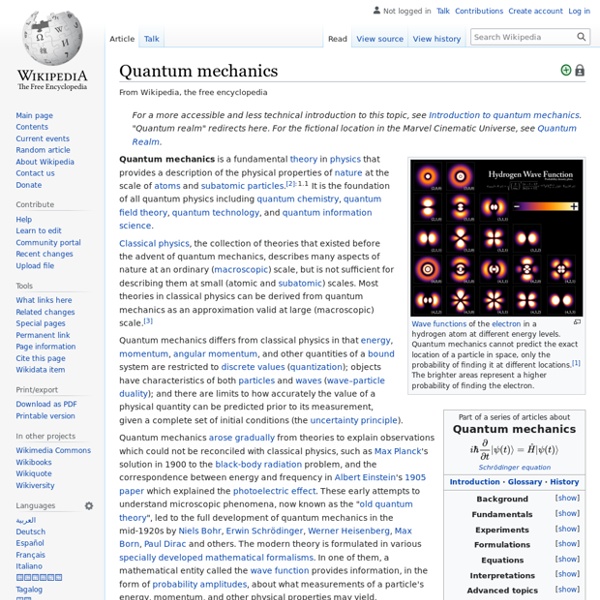 Wavefunctions of the electron in a hydrogen atom at different energy levels. Quantum mechanics cannot predict the exact location of a particle in space, only the probability of finding it at different locations.[1] The brighter areas represent a higher probability of finding the electron. Quantum mechanics (QM; also known as quantum physics, quantum theory, the wave mechanical model, or matrix mechanics), including quantum field theory, is a fundamental theory in physics which describes nature at the smallest scales of atoms and subatomic particles.[2] Quantum mechanics gradually arose from theories to explain observations which could not be reconciled with classical physics, such as Max Planck's solution in 1900 to the black-body radiation problem, and from the correspondence between energy and frequency in Albert Einstein's 1905 paper which explained the photoelectric effect. History[edit] In 1838, Michael Faraday discovered cathode rays. where h is Planck's constant. Coulomb potential.

Quantum cryptography Quantum cryptography uses our current knowledge of physics to develop a cryptosystem that is not able to be defeated - that is, one that is completely secure against being compromised without knowledge of the sender or the receiver of the messages. The word quantum itself refers to the most fundamental behavior of the smallest particles of matter and energy: quantum theory explains everything that exists and nothing can be in violation of it. Quantum cryptography is different from traditional cryptographic systems in that it relies more on physics, rather than mathematics, as a key aspect of its security model.

Biefeld–Brown effect There is renewed focus on the Biefield–Brown effect with the spread in interest in high-voltage powered experimental flying devices known as ionocraft or lifters.[citation needed] Effect analysis[edit] Better Nuclear Power Through Ping Pong The lab is deep-space quiet. A long, narrow hallway hung with fluorescent lights extends to my left. Four or five doors interrupt the flow of drywall. A few of those doors are open, the occupants of the rooms within now out in the hall and staring, ears plugged in anticipation.

Nervous system The nervous system is the part of an animal's body that coordinates its voluntary and involuntary actions and transmits signals between different parts of its body. Nervous tissue first arose in wormlike organisms about 550 to 600 million years ago. In most animal species it consists of two main parts, the central nervous system (CNS) and the peripheral nervous system (PNS). The CNS contains the brain and spinal cord. What Is Quantum Mechanics? Quantum Physics Defined, Explained Quantum mechanics is the branch of physics relating to the very small. It results in what may appear to be some very strange conclusions about the physical world. At the scale of atoms and electrons, many of the equations of classical mechanics, which describe how things move at everyday sizes and speeds, cease to be useful. In classical mechanics, objects exist in a specific place at a specific time. However, in quantum mechanics, objects instead exist in a haze of probability; they have a certain chance of being at point A, another chance of being at point B and so on.

Dirac equation In particle physics, the Dirac equation is a relativistic wave equation derived by British physicist Paul Dirac in 1928. In its free form, or including electromagnetic interactions, it describes all spin-½ massive particles, for which parity is a symmetry, such as electrons and quarks, and is consistent with both the principles of quantum mechanics and the theory of special relativity,[1] and was the first theory to account fully for special relativity in the context of quantum mechanics. Although Dirac did not at first fully appreciate the importance of his results, the entailed explanation of spin as a consequence of the union of quantum mechanics and relativity—and the eventual discovery of the positron—represent one of the great triumphs of theoretical physics.

'We Don't Planet' Episode 3: What's Up with Gravitational Lensing? The fundamental description of gravity under general relativity — that the presence of matter and energy deforms the fabric of space-time, and this deformation influences the motion of other objects — leads to a rather unexpected result: a massive object can act like a lens, magnifying and warping the images of background objects. This prediction was the first major test of general relativity, with Sir Arthur Eddington leading an expedition to measure the small (but detectable) deflection of starlight around our sun, and today this facet of our universe is used as a powerful cosmological probe. The challenge that gravitational lensing answers is the determination of mass at very large scales.

What is quantum superposition Quantum matter can be difficult to study. While physicists have come a long way in the research of this microscopic science, some things are still a mystery because quantum matter can behave so erratically. Einstein's theory of relativity and various other laws of physics tend to fall apart at the subatomic level of quantum physics, because photons -- or tiny particles of light -- seem to change form randomly, and possibly change simply in observation. Niels Bohr, a famous Danish physicist, proposed the Copenhagen interpretation, which revolves around quantum superposition.

Ultracapacitors Make City Buses Cheaper, Greener (PhysOrg.com) -- A fleet of 17 buses near Shanghai has been running on ultracapacitors for the past three years, and today that technology is coming to the Washington, DC, for a one-day demonstration. Chinese company Shanghai Aowei Technology Development Company, along with its US partner Sinautec Automobile Technologies, predict that this approach will provide an inexpensive and energy efficient way to power city buses in the near future. The biggest advantage of ultracapacitors is that they can fully recharge in less than a minute, unlike lithium-ion batteries which can take several hours. The downside of ultracapacitors is that they currently have a very short range, providing a distance of only a few miles, due to the fact that ultracapacitors can store only about 5% of the energy that lithium-ion batteries can hold.

Could cold spot in the sky be a bruise from a collision with a parallel universe? Scientists have long tried to explain the origin of a mysterious, large and anomalously cold region of the sky. In 2015, they came close to figuring it out as a study showed it to be a “supervoid” in which the density of galaxies is much lower than it is in the rest of the universe. However, other studies haven’t managed to replicate the result. Now new research led by Durham University, submitted for publication in the Monthly Notices of the Royal Astronomical Society, suggests the supervoid theory doesn’t hold up. Intriguingly, that leaves open a pretty wild possibility – the cold spot might be the evidence of a collision with a parallel universe. But before you get too excited, let’s look at how likely that would actually be.