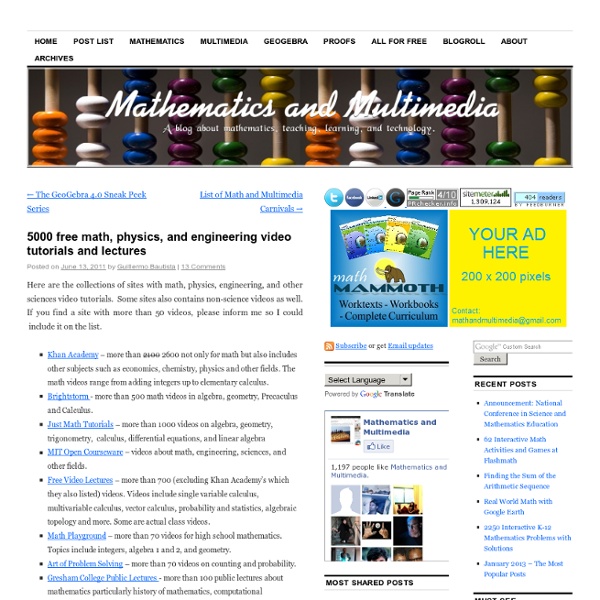 Here are the collections of sites with math, physics, engineering, and other sciences video tutorials. Some sites also contains non-science videos as well. If you find a site with more than 50 videos, please inform me so I could include it on the list. Khan Academy – more than 2100 2600 not only for math but also includes other subjects such as economics, chemistry, physics and other fields.

Free online Multimedia Training Videos from the University of Westminster Math Apps for the iPhone, iPod Touch, and iPad Yesterday, while browsing through the app store on iTunes, I came across a banner-style ad at the top of the page for apps that help you to learn math. I found this feature very helpful and decided to browse through some of the apps. The topics were broken down into sections including Numbers & Operation, Geometry, Algebra, Calculus, Probability & Statistics, Applying Math, and Math Games. The important factors that you should consider when buying an app to use is price, quality, interactive ability, and be sure that it is engaging and easy to use. iLiveMathSpeed iLiveMathSpeed is one of a series of iLiveMath apps provided by iHomeEducator. If they want to learn more about a topic, they are able to choose to go through to a kid-friendly browser that links to the terms based on the transportation and math covered the program. The newest version of this app has larger buttons to pick the various options and answers in the activity to help special needs students. 115-in-1 Math Solver

Storyboarding: Pre-Writing Activity  The more we podcast and have our students create video clips or other digital storytelling projects, the more we need to teach storyboarding as part of the process. Being able to pre-visualize how your story will unfold is becoming a vital skill to have for storytellers. Storyboards are defined as: Graphic organizers such as a series of illustrations or images displayed in sequence for the purpose of pre-visualizing a motion picture, animation, motion graphic or interactive media sequence, including website interactivity. In the book by Roger Essley “Visual Tools for Differentiating Reading & Writing Instruction: Strategies to Help Students Make Abstract Ideas Concrete and Accessible”, he says Storyboarding, or picture writing, is the origin of all written languages, used by ancient cultures before text evolved and as a natural bridge to text. Pre-Writing is defined as Pre-writing is the first stage of the writing process, typically followed by drafting, revision, editing and publishing.

Professional blog | 21st Century Educator Here are some tools which I've either used (or explored) for mathematics education. They aren't all open source, but they are all extremely useful, and they are all free to use (free as in free beer, some of them are also free as in free speech). Geogebra This program lets you explore algebra and geometry, much like it's proprietary cousin, Geometer's Sketchpad. Mathematics Visualization Toolkit The Mathematics Visualization Toolkit is exactly that, a program which lets you visualize mathematics. Scratch Scratch is an excellent program for learning programming but also mathematics like variables, sequences, Cartesian coordinates, and other useful mathematical concepts. Netlogo Netlogo is "a multi-agent programming modelling environment" (According to the Netlogo website). Audacity Audacity is an open source audio editor and recorder. Calculize Calculize is a free (currently) web app which lets students perform mathematical computations using a reasonably simple programming language. Desmos Logo

High-resolution 3D Models of Cities Created from Aerial Photographs If you thought Google Earth was cool, check out the work being done by Swedish corp C3 Technologies. Using only photos shot from planes, they can automatically create high-resolution 3D models of entire cities that can then be explored. The above video shows a beautiful fly-by of New York City. All of the C3 products are based on high-resolution photography captured with carefully calibrated cameras. They can also apply the technology to turn panoramic photographs captured at street-level into 3D models of the scene that the user can navigate through freely. (via Photoxels)

How To Remove Ambient Noise From Your Audio Files Using Audacity Audacity is a free program available for Mac, Windows and Linux, so most people should be able to download this and use it to clean up their recordings. Today we’ll take you through a few simple steps you can use on all recordings to remove background noise from audio. Install Audacity When you’ve downloaded Audacity, you’ll notice that it’s able to be used to import or record music and vocal tracks and can be used to mix tracks together for other purposes. This makes it very useful to musicians and podcasters alike, whether you are an amateur or a professional. It’s very easy to isolate sections of each individual track and use the editing features to remove the ambient noise in the background. Import Or Record Audio Either import the audio file you wish to clean up, or use Audacity as the recording tool. Isolate A Quiet Moment After importing, you’ll see the tracks of the audio file as separate lines in Audacity. Step 1 – Get Noise Profile This opens up a dialogue to remove the noise.

The How-To Geek Guide to Audio Editing: Cutting, Trimming & Arranging Audacity novices often start with lofty project ideas, but sometimes they lack the basics. Knowing how to cut and trim tracks is basic audio editing and is a fundamental starting point for making more elaborate arrangements. For this exercise, I’ll be making a ringtone from a Castlevania: Symphony of the Night track. I have the original CD and used that so I started with better quality audio than an MP3. You can follow along with any file you like, just so you get a feel for cutting, trimming, and arranging sound clips for yourself. I know which parts I want to edit in the track, but a quick play-through will help me look for those areas visually. The scrubber in the above screenshot is pointing to a lull in the music, where the audio drops low or fades out. First, let’s make sure the Selection tool is active. Next, let’s make a selection in an area of the track where we want to make an edit. I know that the song changes somewhere in here. That’s much better, isn’t it?

How To Remove Vocals From Music Tracks Using Audacity Ever get a sudden, inexplicably irresistible desire for karaoke? Maybe you like the music of a song but can’t stand the lead singer? Here’s how to use remove the vocals from most music tracks in a few simple steps. How It Works Vocals are normally placed in the “center channel.” On the whole, however this process works really well if you start with good quality audio. Removing the Center Channel Fire up Audacity and load your song of choice. The first thing we need to do is break the song’s two channels into two separate tracks. Next, pick a channel (it doesn’t matter which) and double click to select the entire track. Go to Effect > Invert. If you hit play, you’ll notice the song sounds a little funny. That’s it! Yatri Trivedi is a monk-like geek.