Paul Hlebowitsh's Blog - How to Teach an Old Puzzle New Tricks. The following blog post, unless otherwise noted, was written by a member of Gamasutra’s community. 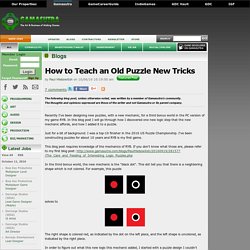 The thoughts and opinions expressed are those of the writer and not Gamasutra or its parent company. Recently I've been designing new puzzles, with a new mechanic, for a third bonus world in the PC version of my game RYB. In this blog post I will go through how I discovered one new logic step that the new mechanic affords, and how I added it to a puzzle. Max Pears's Blog - Jungle Gyms (Playgrounds) Real Life Level Design. The following blog post, unless otherwise noted, was written by a member of Gamasutra’s community. 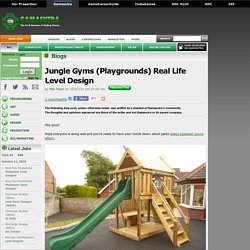 The thoughts and opinions expressed are those of the writer and not Gamasutra or its parent company. Hey guys! Hope everyone is doing well and you're ready to have your minds blown about parks (plays explosion sound effect). 5 lessons game devs can learn from the continued success of pachinko. Most people who are follow videogames will have some awareness of pachinko. 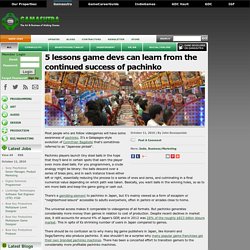 It's a Galapagos-style evolution of Corinthian Bagatelle that's sometimes referred to as "Japanese pinball". Pachinko players launch tiny steel balls in the hope that they'll land in certain spots that earn the player even more steel balls. For you programmers, a crude analogy might be binary: the balls descend over a series of brass pins, and in each instance travel either left or right, essentially reducing the process to a series of ones and zeros, and culminating in a final numerical value depending on which path was taken.

Basically, you want balls in the winning holes, so as to win more balls and keep the game going or cash out. There's a gambling element to pachinko in Japan, but it's mainly viewed as a form of escapism or "neighborhood leisure" accessible to adults everywhere, often in parlors or arcades close to home. The universal access makes it comparable to videogames of all formats. BrettSpiel: Game Design 101: What Are The Odds? In which I do a little bit of maths to demonstrate the surprising, and to the game designer surprisingly useful, nature of probabilities. 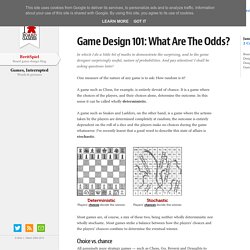 And pay attention! I shall be asking questions later! One measure of the nature of any game is to ask: How random is it? A game such as Chess, for example, is entirely devoid of chance. It is a game where the choices of the players, and their choices alone, determine the outcome. BrettSpiel: Game Design 101: What Are The Odds?

Tony oakden's Blog - Rock Paper Scissors - and why games don't really get it. The following blog post, unless otherwise noted, was written by a member of Gamasutra’s community. 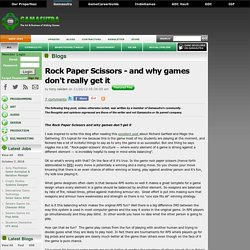 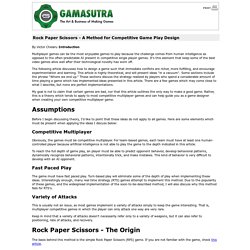 Probability for Game Designers. James Ernest explains the basics of probability theory as it applies to game design, using examples from casino games and tabletop games. 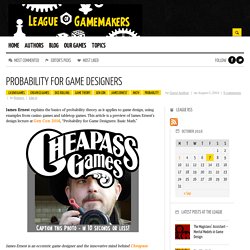 Evaluating Game Mechanics For Depth. [Former Insomniac designer Mike Stout takes shares a useful rubric for judging the depth of play mechanics, including checks for redundant ones, in this in-depth design article, which contains examples from the Ratchet & Clank series.] 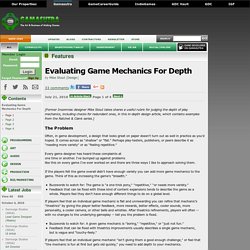 Often, in game development, a design that looks great on paper doesn't turn out as well in practice as you'd hoped. It comes across as "shallow" or "flat. " Perhaps play-testers, publishers, or peers describe it as "needing more variety" or as "feeling repetitive. " How To Build A Smart Game Economy. With game developers’ main objective being to create a really good game with an optimal monetization mechanism to maximize revenue, there are quite a few aspects to planning and implementing one’s game economy. 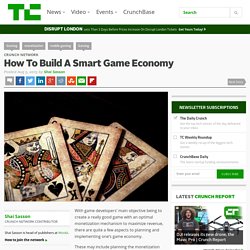 These may include planning the monetization strategy and in-game economic structure, applying an enticing value exchange and making your monetization options accessible within the game, each a chapter on its own. Let’s start with a bit of an introduction. A game economy is a virtual economy that configures all game loops in the game (currencies, time loops, XP, levels, pricing, etc.).

Different game economies will structure different players’ behaviors within the same game. Now let’s review a few do’s and don’ts. David Mullich's Blog - The Objectives Of Game Goals. The following blog post, unless otherwise noted, was written by a member of Gamasutra’s community. 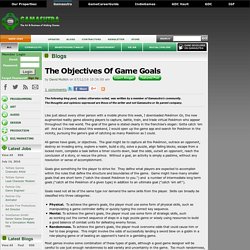 The thoughts and opinions expressed are those of the writer and not Gamasutra or its parent company. Like just about every other person with a mobile phone this week, I downloaded Pokémon Go, the new augmented reality game allowing players to capture, battle, train, and trade virtual Pokémon who appear throughout the real world. Theory and Principles of Game Design: Narrative and Consequences. The holy grail of narrative game design is a game with a carefully constructed narrative that players can influence to the same degree as their real lives. The goal is to have stories that are every bit as engaging as traditional narratives but created in such a way as to enable a rich variety of player experiences.

For games in which content is written primarily by human beings, creating such flexible narratives is almost certainly impossible given the number of potential choices for the player -- far too many for any author to account for. On the other hand, for games in which content might be generated dynamically with the aid of computer algorithms, current Artificial Intelligence approaches aren't advanced enough to produce engaging narratives. Players should be offered meaningful choices. Purchase Sildenafil Soft Tablets Buy Singapore. Sildenafil relaxes muscles and increases blood flow to particular areas of the body. Sildenafil under the name Viagra is used to treat erectile dysfunction (impotence) in men. Another brand of sildenafil is Revatio, which is used to treat pulmonary arterial hypertension and improve exercise capacity in men and women.

Learning to Love Handicaps in Competitive Games. I'm a huge fan of the N64 kart-racer Diddy Kong Racing. Actually, the N64 had a lot of great racing games. Many people are most familiar with Mario Kart 64, but I much preferred F-Zero X, WaveRace, and even the rarely praised ExciteBike 64. All of these games shared a similar story for me, and I'll bet that I'm not entirely alone in my experience. Excited to get into this new game, I'd start playing it the day I picked it up. The 13 Basic Principles of Gameplay Design.

[In an intriguing design feature, EA and Page 44 veteran Allmer re-imagines the famous '12 Principles Of Animation' for video games - adding a principle along the way!] Gameplay design is chaotic and full of frustrations and contradictions. More often than not, the request is to come up with something guaranteed to be successful. This condition steers solutions towards the established -- which means solutions that have been done before. But in the same breath, the product must separate itself from the competition or stand out in some way. 7 progression and event systems that every developer should study. Online multiplayer games are almost defined by a constant state of change. Since their inception, the rise and fall of different genres, the constant patching, and the eventual creation of things like metagames has meant the only real certainty in developing online games is that—well, nothing is certain.

But even if nothing is certain or fixed in online game development, that doesn’t mean past trends don’t matter, and two trends that have taken over online multiplayer are the introduction of progression systems and events. Progression systems, in case the name itself isn’t clear, are means of tracking player progress across multiple matches. Depending on the game, this may not directly affect the choices and opportunities for players in the game itself, but it generally offers some way for players who’ve invested hundreds of hours into a multiplayer title from those who’ve just started.

Christopher Gile's Blog - Achievements are Permission. The following blog post, unless otherwise noted, was written by a member of Gamasutra’s community. Gamester: Chance & skill in games. A paper presented at the 11th annual colloquium of the Board Game Studies Association, Lisbon, 2008. Narrative as a Design Element - thedesigngym.comthedesigngym.com. Twenty-Three pages of Awesome, to help you and your team make better things.

GAME 3400 Level Design - Introduction. #AltDevBlog » Game Designers are all on Steroids. What Games Are: The Win Imperative. The Problem With BioShock Infinite's Combat. A list of 7 persuasive methods used in games to hook users. Long gone are the days where games could just be great in order to generate revenue. Now, since 90% of games on the app store and Google Play are free, being a great game isn’t good enough. Games must be addictive, habit forming and mind–boggling, so they can rise to the top over a myriad of other great, free games who compete on users’ free time. Only games that encourage users to engage and spend regularly can survive. The Weblog The Key to Depth: Simplicity. Features - Behavioral Game Design. The lasagne theory of game design.

This is the first of a series of posts about lasagne. Lasagne is one of the most inspiring things that ever came out of Italy, and thinking about it is truly food for thought (sorry, I know that joke was bad). Can Game Mechanics Control And Influence The Player? Narrative is not a game mechanic. Triangularities in vechtspellen: een perspectief – Bashers. Josh Bycer's Blog - Great Game Design Debate: MMO Leveling Edition. What Is Skill? The Game Atom: The fabric of game mechanics. Why Our RPGs Still Need Numbers. Puzzles and RPGs. Game Design Lessons: From Seconds to Hours of Gameplay.