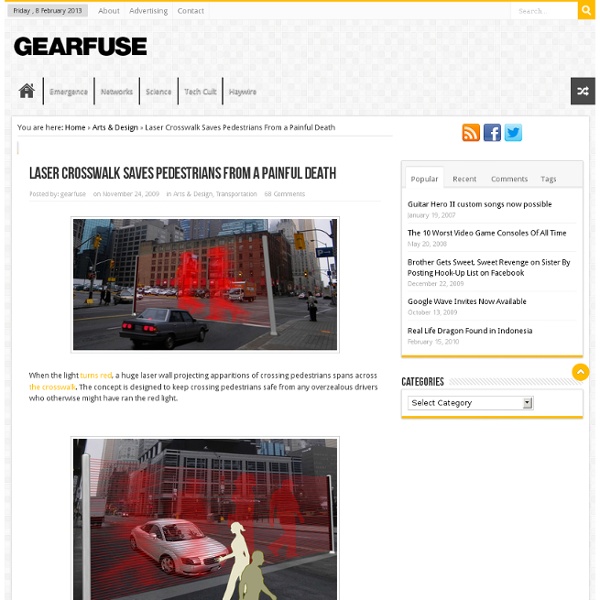 iPhone App Word Lens Instantly Translates Life Into Something Amazing A new app just hit the iTunes App Store with the slightly unassuming name "Word Lens." You may think it's got something to do with typography or photography...but you'd only be partly right. It also instantly translates Spanish to English. What the app does is take the image stream from the iPhone's camera, apply real-time image processing and pattern recognition tricks to it, and it then "plays" with any text it finds in the scene before displaying it on the iPhone's screen. Not impressed by the description? Tron Legacy (2010) Year: 2010 Tron Legacy permalink I spent a half year writing software art to generate special effects for Tron Legacy, working at Digital Domain with Bradley "GMUNK" Munkowitz, Jake Sargeant, and David "dlew" Lewandowski. This page has taken a long time to be published because I've had to await clearance. A lot of my team's work was done using Adobe software and Cinema 4D. The rest of it got written in C++ using OpenFrameworks and wxWidgets, the way I've always done it with this team ;) Uniquely however, Digital Domain's CG artists were able to port my apps over to Houdini for further evolution and better rendering than OpenGL could ever provide.

Japan's quake updated to magnitude 9.0 Read more: "Special report: After Japan's megaquake" 0930 GMT, 12 March 2011 Sumit Paul-Choudhury, editor, newscientist.com There has been a massive explosion at the Fukushima-Daiichi nuclear power plant, raising fears of a radioactive meltdown. Several workers are believed to have been injured in the blast, which seems to have caused major structural damage to the plant. A state of nuclear emergency was declared at the plant yesterday as its operator, the Tokyo Electric Power Company, struggled to contain rising temperatures and pressures in the core of two reactors whose cooling systems failed after Friday's magnitude 9.0 earthquake.

‘Swiftpoint SLIDER’ looks to replace your trackpad Though the Swiftpoint SLIDER shown in the above photo may look like a full-sized mousing apparatus, make no mistake; it’s tiny and it fits around your thumb. It can also be flipped up sideways and used somewhat like a pen. The device is billed as “the perfect solution to the challenges of new and emerging technologies and operating environments: offering full mouse funtionality and more, in a compact and ergonomic package, without the need for the additional ‘mousing surface’ that mobile environments ofetn lack.” In English, that means that you can use it on top of your laptop keyboard, like so… And, as previously mentioned, you can also use it like a pen. Example!

Plug Cup – Single Plugging Cup for Tea and Coffee by Dong Hun Seo, Geun Hyuk Yoo, Ki Sang Yoon & Yune Jae Bang Single Cup Special Oh boy, this Plug Cup is going to make me lazybones. Ever since I’ve laid my eyes on it, I have wanted this concept to come to life. It’s perfect for this instant coffee and green tea glutton that I am. A simple 180° rotating 2-pin plug at the base of the cup hooks on to any power source; so imagine this hanging off the powerstrip where my computer plugs are hitched! Doctor Who Timeline Infographic Check out this complete timeline of Doctor Who from 1963 to present, including episodes, seasons, companions, villains, and more. Scroll down to follow all the Doctor's adventures through time. A Fantastic resource for any Doctor Who fan. Adventure Titles

Our Technological Future: Singularity FAQ for Dummies To start out with, I am now posting a Singularity FAQ for dummies that I have written myself. I've dubbed it version 0.5 for now. I'm counting on lots of additional questions from all of you, which I will include so I can upgrade the version number. I'm sure there are spelling and grammar errors in here, but hey... it's only version 0.5, right? The reason I wrote this, is because when I'm reading posts on fora or in newsthreads that are related to artificial intelligence, I see lots of uninformed opinions. This is not always the posters' fault. Why do we believe in electrons, but not in fairies? by Benjamin Kuipers No one has directly observed either electrons or fairies. Both of them are theoretical constructs, useful to explain observations that might be difficult to explain otherwise. The "theory of fairies" can actually explain more things than the "theory of electrons". So why do we believe in electrons, but not in fairies? Is the issue a political one, where the "electron" fans got the upper hand in the nineteenth century, so by the twentieth century the "fairy" fans were a scorned and persecuted minority?

45+ Free and Effective Color Palette and Color Scheme Generators Here we are sharing more than 45 color palette and color scheme generators that you can use for free. Colors play an important role in any sort of design no matter how small it is. Through different colors, you can set a particular feel for your design and change its nature.