Josh Bycer's Blog - The Not so Secrets to Success in the GameÂ Industry. The following blog post, unless otherwise noted, was written by a member of Gamasutra’s community. 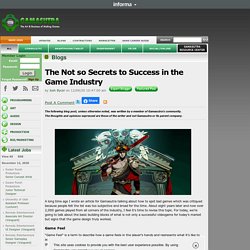 The thoughts and opinions expressed are those of the writer and not Gamasutra or its parent company. A long time ago I wrote an article for Gamasutra talking about how to spot bad games which was critiqued because people felt the list was too subjective and broad for the time. About eight years later and now over 2,000 games played from all corners of the industry, I feel it’s time to revise this topic. For today, we’re going to talk about the basic building blocks of what is not only a successful videogame for today’s market but signs that the game design truly worked.

Game Feel “Game Feel” is a term to describe how a game feels in the player’s hands and represents what it’s like to actually play the game. Cat video games are here to boost coronavirus quarantine. Virtual worlds have become more ubiquitous during our current stay-at-home life. 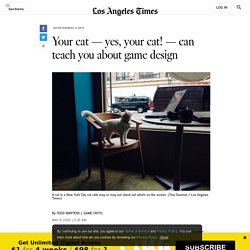 It’s not just video games such as “Fortnite” redefining music gatherings and talk shows springing up in“Animal Crossing.” Virtual worlds are so appealing that it turns out that cats are gamers, too. Pascal Luban's Blog - Best practices for a successful FTUE (First Time User Experience) The following blog post, unless otherwise noted, was written by a member of Gamasutra’s community. 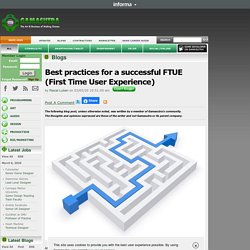 The thoughts and opinions expressed are those of the writer and not Gamasutra or its parent company. All freemium game developers know this reality: The majority of players who discover a free game for the first time never come back. D + 1 retention rate often fluctuates between 20 and 40%. In view of the difficulty and cost of attracting new players to its game, short-term retention has become a priority objective for game designers. Abhisake Goyal's Blog - How Interaction Design can help in creating a better player experience. 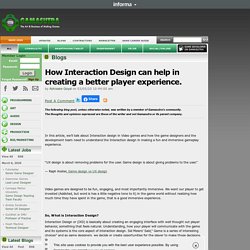 The thoughts and opinions expressed are those of the writer and not Gamasutra or its parent company. In this article, we’ll talk about Interaction design in Video games and how the game designers and the development team need to understand the Interaction design in making a fun and immersive gameplay experience. “UX design is about removing problems for the user. Game design is about giving problems to the user.” Free personality test, type descriptions, relationship and career advice. Jamie Madigan's Blog - Newtonian Engagement and Metal Gear Solid V. The following blog post, unless otherwise noted, was written by a member of Gamasutra’s community. 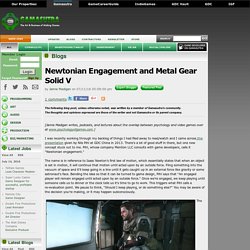 The thoughts and opinions expressed are those of the writer and not Gamasutra or its parent company. [Jamie Madigan writes, podcasts, and lectures about the overlap between psychology and video games over at www.psychologyofgames.com.] Josh Bycer's Blog - 5 Tips for Designing Control Schemes. The following blog post, unless otherwise noted, was written by a member of Gamasutra’s community. 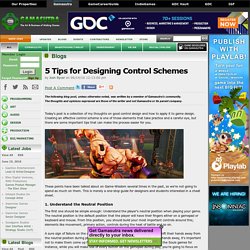 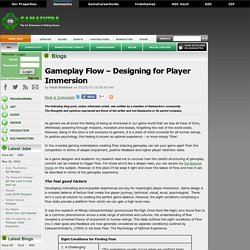 The thoughts and opinions expressed are those of the writer and not Gamasutra or its parent company. As gamers we all know the feeling of being so immersed in our game-world that we lose all track of time; effortlessly powering through missions, monsters and bosses, forgetting the rest of the world exists. However, being in the zone is not exclusive to gamers, it is a state of mind universal for all human beings. In positive psychology, this feeling is known as optimal experience – or more simply ‘Flow’. In the crowded gaming marketplace creating Flow inducing gameplay can set your game apart from the competition in terms of deeper enjoyment, positive feedback and higher player retention rates.

Lessons from the New Arcade: Primary Exploration in Games. If there were a Rosetta Stone, so to speak, that allowed hardcore game designers to translate their game ideas into a casual format, it would be quite a breakthrough. 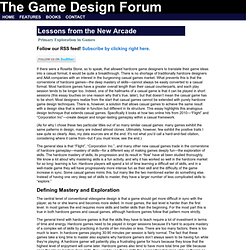 There is no shortage of traditionally hardcore designers and AAA companies with an interest in the burgeoning casual games market. What prevents this is that the cornerstone of hardcore games—the deep mastery of skills—cannot always be easily converted to a casual format. Most hardcore games have a greater overall length than their casual counterparts, and each play session tends to be longer too. Indeed, one of the hallmarks of a casual game is that it can be played in short sessions (this essay touches on one reason why that’s true, later), but that doesn’t mean the casual game has to be short. Most designers realize from the start that casual games cannot be extended with purely hardcore game design techniques. 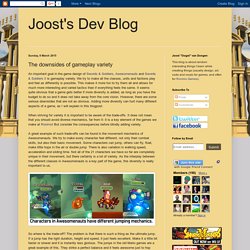 We try to make all the classes, units and factions play and feel as differently is possible. This makes it more fun to try them all and allows for much more interesting and varied tactics than if everything feels the same. It seems quite obvious that a game gets better if more diversity is added, as long as you have the budget to do so and it does not take away from the core vision. 4 principles for the design of game interfaces. The latest issue of User Experience Magazine features a gem of an article for those looking for a very brief intro into basic heuristics for game design. 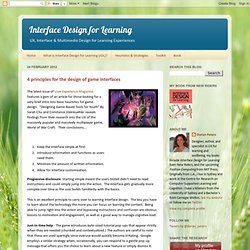 "Designing Game-Based Tools for Youth" By Sarah Chu and Constance Steinkuehler reveals findings from their research into the UX of the massively popular and massively multiplayer game, World of War Craft. Their conclusions...Keep the interface simple at first. Introduce information and functions as users need them. Minimize the amount of written information. Principles of User Interface Design. Clarity is job #1 Clarity is the first and most important job of any interface. To be effective using an interface you've designed, people must be able to recognize what it is, care about why they would use it, understand what the interface is helping them interact with, predict what will happen when they use it, and then successfully interact with it.

While there is room for mystery and delayed gratification in interfaces, there is no room for confusion. Clarity inspires confidence and leads to further use. One hundred clear screens is preferable to a single cluttered one. Interfaces exist to enable interaction Interfaces exist to enable interaction between humans and our world. Feedback Loops in Game Design [Infographic] FEEDBACK LOOPS IN GAME DESIGN as observed by Jesse Catron, Jay Barnson, Kyoryu Design: Daniel Solis (danielsolis.com) In a feedback loop, the output affects the input.

POSITIVE FEEDBACK AMPLIFIES the output and tends to destabilize the system. For example, the runaway leader. One player takes an early insurmountable lead. Make a better game: Limit the player. [In this piece reprinted with permission from Stardock producer Jon Shafer's blog, the former Civilization lead designer explains the benefits of keeping limits in your game, pulling examples from his own design decisions with Firaxis' strategy series.] Okay, okay, I know what you're saying. "Limiting the player makes a better game? Are you crazy? Games should have fewer limits, not more! " Players should always feel like they have options -- but having limitless options is definitely not a good thing. You go to the grocery store because a friend asked you to pick up some flour for a recipe. Features - Psychology is Fun. [In this thought-provoking piece, psychology researcher and author Clark takes a look at how psychology and can must be applied to game development, to produce works that engage audiences -- offering up concrete examples of the right techniques.]

Gaming's core is fun, and psychology is fun's touchstone. This article restricts itself to psychology's most foundational, most immediately-applicable methods for crafting sticky, captivating experiences. From behaviorism's methods for structuring overpowering rewards, to motivational theories on generating wants and needs, to hybrid theories like flow, it is no longer fiscally responsible for games companies to shun psychology. Let's jump right in. Pleasure first, and then, excuse from pain, shape every move that we will ever make -- so say the behaviorists. Whether we know it or not, whether we like it or not, behavior is shaped by reward. Operant conditioning, often associated with Edward Thorndike, then B.F. A Theory of Compression and Funneling. [In this article Qantm College game design theory lecturer Luke McMillan here presents a look at how players can be funneled in game design, using the example of classic 2D shooters to illustrate the practice in a work adapted from his PhD at Australia's Queensland Conservatorium of Music.]

In terms of rational approaches to contemporary level design, the notion of line of sight being a key difficulty metric is widely used and acknowledged. That is to say, the greater the player's line of sight, the more they will feel empowered and the easier a particular scenario may become. Card Design Commandments. Post by: Grant Rodiek I have a thing for card games. Game Design: Small Choices. Posted by Rampant Coyote on April 14, 2011 As a gamer, we want deeply meaningful decisions that can change the whole course of the story, a la the old Choose Your Own Adventure books. We want big, dramatic decisions with big, dramatic consequences. Features - The Abstraction Of Skill In Game Design. [These days, many games feature a blend of action and RPG elements -- is there any way to determine whether a blend is effective?

» Prototyping for Game Feel. » Prototyping for Game Feel (v.2) It’s intangible, below the surface, on the tips of fingers and the tips of tongues. It’s been with us since the beginning, since Pong, Spacewar, and what came before. Quality, Frequency and Clarity: Understanding Play Mechanics. » Virtual Sensation and the Wii. Play Understanding Games: Episode 2. What Makes Combat Fun: Tips From A Combat Designer « #AltDevBlogADay.

Teaching Players how to Play your Game » #AltDevBlogADay.