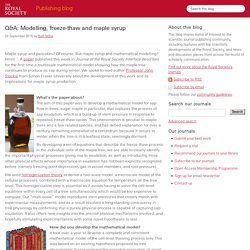 Of course. But maple syrup and mathematical modelling? Hmm… A paper published this week in Journal of the Royal Society Interface describes for the first time a multiscale mathematical model showing how the maple tree continues to produce its sap during winter. We spoke to lead author Professor John Stockie from Simon Fraser University about the development of this work and its implications for maple syrup production. What’s the paper about? By developing a set of equations that describe the freeze-thaw process in the individual cells of the maple tree, we are able to clearly identify the important physical processes giving rise to exudation, as well as introducing three other physical effects whose importance in exudation has not been explicitly recognized before (namely freezing point depression, gas in vessel members, and root pressure).

How did you develop the mathematical model? How do environmental conditions impact the freeze-thaw process? The Journey To The Other Side Of Absolute Zero. Absolute zero is the temperature (-273.15C) at which all motion in matter stops and is thought to be unreachable. 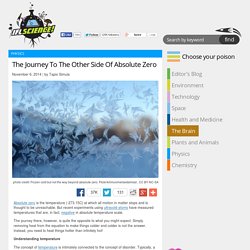 But recent experiments using ultracold atoms have measured temperatures that are, in fact, negative in absolute temperature scale. The journey there, however, is quite the opposite to what you might expect. Simply removing heat from the equation to make things colder and colder is not the answer. Instead, you need to heat things hotter than infinitely hot! Understanding temperature The concept of temperature is intimately connected to the concept of disorder. Ice crystals are more ordered than boiling water and, as intuition tells us, ice is indeed colder than hot water. But under certain very special circumstances, a system may become more ordered when more energy is added beyond a critical value which corresponds to an infinite temperature. Amazing Timelapse Of Asperatus Clouds Reminds Us That Clouds Can Act As A Fluid Too! Check out this absolutely EXTRAORDINARY time-lapse of Asperatus clouds taken in Lincoln NE, on July 7 2014 by storm-chaser Alex Schueth. 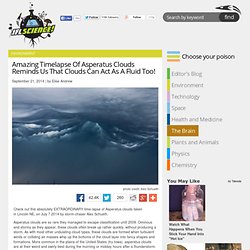 Asperatus clouds are so rare they managed to escape classification until 2009. Ominous and stormy as they appear, these clouds often break up rather quickly, without producing a storm. As with most other undulating cloud types, these clouds are formed when turbulent winds or colliding air masses whip up the bottoms of the cloud layer into fancy shapes and formations. Cavitation. Cavitation Name: Bill Status: other Age: 20s Location: N/A Country: N/A Date: 2000-2001 Question: I would like to learn about cavitation. 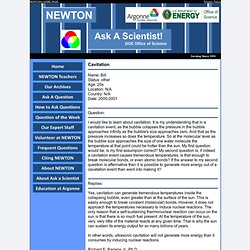 It is my understanding that in a cavitation event, as the bubble colapses the pressure in the bubble approaches infinity as the bubble's size approaches zero. And that as the pressure increases so does the temperature. Replies: Yes, cavitation can generate tremendous temperatures inside the collapsing bubble, even greater than at the surface of the sun. In other words, ultrasonic cavitation will not generate more energy than it consumes by inducing nuclear reactions. Richard E. An interesting experiment, but it is unlikely that are getting more energy out than you put in. 08, 09/2014, 19:15. Cavitation. High-speed jet of fluid impact on a fixed surface. 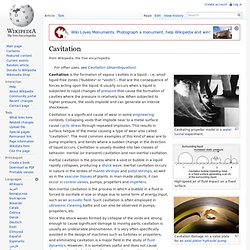 Cavitation is the formation of vapour cavities in a liquid – i.e. small liquid-free zones ("bubbles" or "voids") – that are the consequence of forces acting upon the liquid. It usually occurs when a liquid is subjected to rapid changes of pressure that cause the formation of cavities where the pressure is relatively low. When subjected to higher pressure, the voids implode and can generate an intense shockwave. Cavitation is a significant cause of wear in some engineering contexts. Collapsing voids that implode near to a metal surface cause cyclic stress through repeated implosion. Pistol Shrimp Claw In Slow Motion.

We all know that the claws of the unassuming mantis shrimp pack a punch, to say the least, but they’ve got a feisty competitor for the award of most badass crustacean: the pistol shrimp. 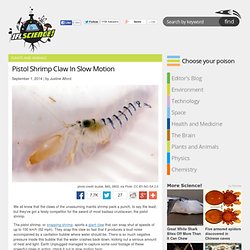 The pistol shrimp, or snapping shrimp, sports a giant claw that can snap shut at speeds of up to 100 km/h (62 mph). Scientists Develop Water Tractor Beam. A staple in most sci-fi movies, tractor beams can be used to rein in broken down starships, assist another vessel in docking, or prevent your enemies from running away. 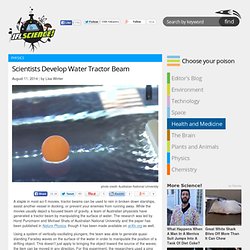 While the movies usually depict a focused beam of gravity, a team of Australian physicists have generated a tractor beam by manipulating the surface of water. The research was led by Horst Punzmann and Michael Shats of Australian National University and the paper has been published in Nature Physics, though it has been made available on arXiv.org as well. Supercooled Helium Seems To Defy Gravity. We all know helium as a gas for blowing up balloons and making people talk like chipmunks. 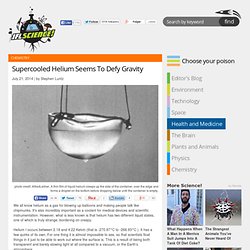 It's also incredibly important as a coolant for medical devices and scientific instrumentation. However, what is less known is that helium has two different liquid states, one of which is truly strange, bordering on creepy. Helium I occurs between 2.18 and 4.22 Kelvin (that is -270.97°C to -268.93°C ).