Sorting – topcoder. By timmac — TopCoder MemberDiscuss this article in the forums Introduction Any number of practical applications in computing require things to be in order. 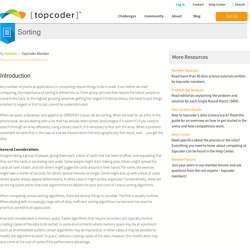 Even before we start computing, the importance of sorting is drilled into us. From group pictures that require the tallest people to stand in the back, to the highest grossing salesman getting the largest Christmas bonus, the need to put things smallest to largest or first to last cannot be underestimated. When we query a database, and append an ORDER BY clause, we are sorting. General Considerations Imagine taking a group of people, giving them each a deck of cards that has been shuffled, and requesting that they sort the cards in ascending rank order.

When comparing various sorting algorithms, there are several things to consider. A second consideration is memory space. A third consideration is stability. Bubble Sort One of the first sorting algorithms that is taught to students is bubble sort. Insertion Sort Merge Sort. The Selection Sort. The selection sort improves on the bubble sort by making only one exchange for every pass through the list. 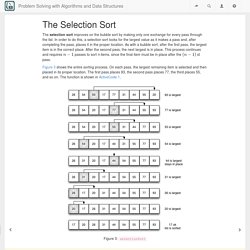 In order to do this, a selection sort looks for the largest value as it makes a pass and, after completing the pass, places it in the proper location. As with a bubble sort, after the first pass, the largest item is in the correct place. After the second pass, the next largest is in place. This process continues and requires passes to sort n items, since the final item must be in place after the st pass. Binary search algorithm. In computer science, a binary search or half-interval search algorithm finds the position of a specified input value (the search "key") within an array sorted by key value.[1][2] For binary search, the array should be arranged in ascending or descending order. 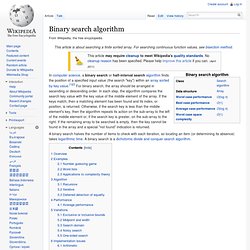 In each step, the algorithm compares the search key value with the key value of the middle element of the array. If the keys match, then a matching element has been found and its index, or position, is returned. Otherwise, if the search key is less than the middle element's key, then the algorithm repeats its action on the sub-array to the left of the middle element or, if the search key is greater, on the sub-array to the right. If the remaining array to be searched is empty, then the key cannot be found in the array and a special "not found" indication is returned. A binary search halves the number of items to check with each iteration, so locating an item (or determining its absence) takes logarithmic time.

Overview[edit] . VisuAlgo - Sorting (Bubble, Selection, Insertion, Merge, Quick, Counting, Radix) VisuAlgo was conceptualised in 2011 by Dr Steven Halim as a tool to help his students better understand data structures and algorithms, by allowing them to learn the basics on their own and at their own pace. 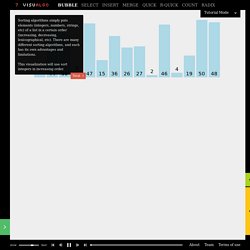 VisuAlgo contains many advanced algorithms that are discussed in Dr Steven Halim's book ('Competitive Programming', co-authored with his brother Dr Felix Halim) and beyond. Today, some of these advanced algorithms visualization/animation can only be found in VisuAlgo. Though specifically designed for NUS students taking various data structure and algorithm classes (e.g. Data Structures and Algorithms: Table of Contents. Data Structures and Algorithms John Morris, Electrical and Electronic Engineering, University of Western Australia These notes were prepared for the Programming Languages and System Design course in the BE(Information Technology) course at the University of Western Australia. 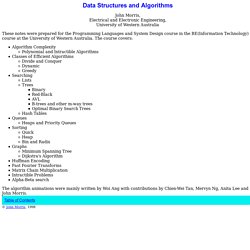 Data Structures and Algorithms with Object-Oriented Design Patterns in C#