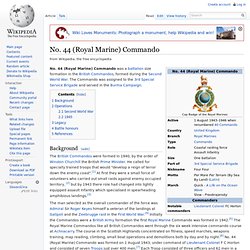 The Commando was assigned to the 3rd Special Service Brigade and served in the Burma Campaign. The British Commandos were formed in 1940, by the order of Winston Churchill the British Prime Minister. He called for specially trained troops that would "develop a reign of terror down the enemy coast".[1] At first they were a small force of volunteers who carried out small raids against enemy occupied territory, [2] but by 1943 there role had changed into lightly equipped assault Infantry which specialised in spearheading amphibious landings.[3] 40 Commando. 40 Commando RM is a battalion sized formation of the British Royal Marines and subordinate unit within 3 Commando Brigade, the principal Commando formation, under the Operational Command of Commander in Chief Fleet. 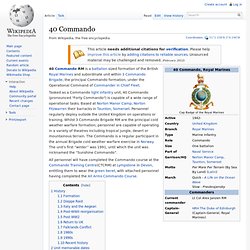 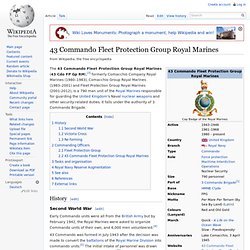 It falls under the authority of 3 Commando Brigade. History[edit] Second World War[edit] Early Commando units were all from the British Army but by February 1942, the Royal Marines were asked to organize Commando units of their own, and 6,000 men volunteered.[4] Along with No. 2, No. 9 and No. 40 (Royal Marine) Commandos they formed the 2nd Special Service Brigade.[9] Throughout the course of 1943–45, No. 43 (Royal Marine) Commando served in Italy, Yugoslavia and Greece.[10] Victoria Cross[edit] Re-forming[edit] In 2004, rifle squadron P was renamed S squadron and the Group was further expanded to a complement of 530. 42 Commando. 42 Commando Royal Marines (pronounced: "Four Two Commando") is a battalion sized formation of the British Royal Marines and a subordinate unit within 3 Commando Brigade, the principal Commando formation, under the Operational Command of Commander in Chief Fleet. 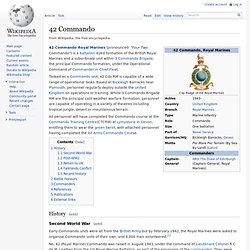 Tasked as a Commando unit, 42 Cdo RM is capable of a wide range of operational tasks. Based at Bickleigh Barracks near Plymouth, personnel regularly deploy outside the United Kingdom on operations or training. Whilst 3 Commando Brigade RM are the principal cold weather warfare formation, personnel are capable of operating in a variety of theatres including tropical jungle, desert or mountainous terrain. All personnel will have completed the Commando course at the Commando Training Centre(CTCRM) at Lympstone in Devon, entitling them to wear the green beret, with attached personnel having completed the All Arms Commando Course. History[edit] 45 Commando. 45 Commando Royal Marines (pronounced "four-five commando") is a battalion sized unit of the British Royal Marines and subordinate unit within 3 Commando Brigade Royal Marines, the principal Commando formation, under the Operational Command of Commander in Chief Fleet. 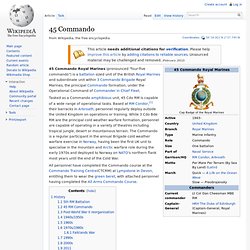 Tasked as a Commando amphibious unit, 45 Cdo RM is capable of a wide range of operational tasks. Based at RM Condor,[1] their barracks in Arbroath, personnel regularly deploy outside the United Kingdom on operations or training. While 3 Cdo Bde RM are the principal cold weather warfare formation, personnel are capable of operating in a variety of theatres including tropical jungle, desert or mountainous terrain. 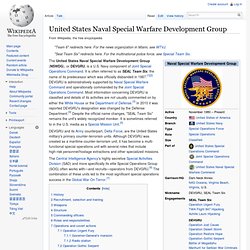 Navy component of Joint Special Operations Command. It is often referred to as SEAL Team Six, the name of its predecessor which was officially disbanded in 1987.[1][2] DEVGRU is administratively supported by Naval Special Warfare Command and operationally commanded by the Joint Special Operations Command. Most information concerning DEVGRU is classified and details of its activities are not usually commented on by either the White House or the Department of Defense.[3] In 2010 it was reported DEVGRU's designation was changed by the Defense Department.[4] Despite the official name changes, "SEAL Team Six" remains the unit's widely recognized moniker. 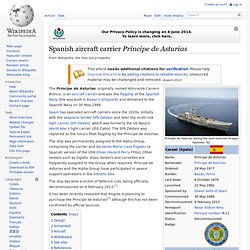 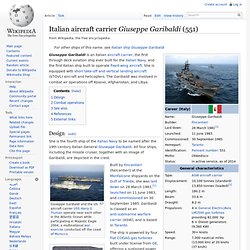 She is equipped with short take-off and vertical landing aircraft (STOVL) aircraft and helicopters. The Garibaldi was involved in combat air operations off Kosovo, Afghanistan, and Libya. JDS Hyūga (DDH-181) JDS Hyūga (DDH-181) is a Hyūga-class helicopter destroyer of the Japan Maritime Self-Defense Force (JMSDF). 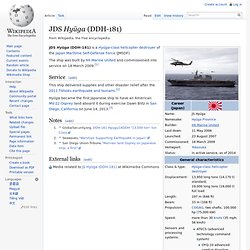 The ship was built by IHI Marine United and commissioned into service on 18 March 2009.[1] This ship delivered supplies and other disaster relief after the 2011 Tōhoku earthquake and tsunami.[2] Hyūga became the first Japanese ship to have an American MV-22 Osprey land aboard it during exercise Dawn Blitz in San Diego, California on June 14, 2013.[3] Izumo-class helicopter destroyer. The Izumo-class helicopter destroyer (いずも型護衛艦, Izumo-gata-goei-kan?) 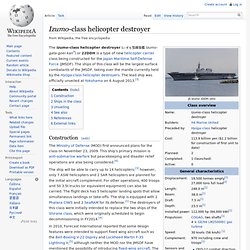 Or 22DDH is a type of new helicopter carrier class being constructed for the Japan Maritime Self-Defense Force (JMSDF). The ships of this class will be the largest surface combatants of the JMSDF, taking over the mantle currently held by the Hyūga-class helicopter destroyers. The lead ship was officially unveiled at Yokohama on 6 August 2013.[3] Construction[edit] Hyūga-class helicopter destroyer. The Hyūga's code-name (16DDH) and Ise's code-name (18DDH) derive from the Japanese calendar, specifically the 16th year and 18th year of the Heisei reign (2004 and 2006), when the provisional title was given.[1] Design and specifications[edit] The ships' primary mission is to function as an anti-submarine warfare carrier with her SH-60K anti-submarine helicopters.

They also have enhanced command-and-control capabilities, allowing them to serve as flagships for the JMSDF.[1] During peacetime operations, or “military operations other than war” (MOOTW), the ships join the Ōsumi-class ships for peacekeeping and relief operations, as well as the “diverse situations” Japan foresees confronting on the high seas. Afghan War order of battle. A U.S. Army Special Forces soldier scans for insurgents during an engagement on 10 April 2007, in the Sangin District area of Helmand Province in southern Afghanistan.

Disbanded on 31 March 1944. Reconstituted, and consolidated (1 March 1992) with the 1724 Combat Control Squadron which was designated, and activated, on 1 May 1987.Redesignated as: 1724 Special Tactics Squadron on 1 October 1987.Redesignated as: 24 Special Tactics Squadron on 31 March 1992. Task Force 88 (anti-terrorist unit) Since the invasion of Iraq, the unit went through a number of changes of designation. Task Force 20 was amalgamated with Task Force 5 (formerly Task Force 11/Task Force Sword) in Afghanistan in July 2003, and became Task Force 21. It was then redesignated Task Force 121, and later as Task Force 626, Task Force 145, and Task Force 88.[6] Neville notes that he omitted the 'current' (c.2008, time of writing) designation of the unit. SEAL Team Six. Naval Special Warfare Group 3. Naval Special Warfare Group 3 (NSWG-3), based at the Naval Amphibious Base Coronado in California, is one of six constituent formations of the United States Naval Special Warfare Command.[1] Until 2008, NSWG-3 was composed of two SEAL Delivery Vehicle Teams: SDVT-1 in Pearl Harbor and SDVT-2 in Little Creek.

In 2008, SDVT-2 was disestablished and merged into SDVT-1, which is now headquartered in San Diego and operates detachments in Pearl Harbor and Little Creek. SDV Teams are SEAL teams with an added underwater delivery capability. An SDV platoon consists of 12-15 SEALs. Germany: Navy appoints first female submarine officer. 3 April 2014Last updated at 10:48 ET. United States Navy Reserve. Is not available. Staff College, Camberley. Staff College, Camberley, Surrey, was a staff college for the British Army from 1802 to 1997, with periods of closure during major wars.

It is a twin-engined aircraft and can carry up to 29 seated troops along with two crew, depending on customer configuration. The helicopter is marketed for troop transport, casualty evacuation, and combat search and rescue duties, and is similar to the civilian EC 225. Development[edit] The EC 725 was developed to meet a French Air Force requirement for a specialist helicopter for Combat Search & Rescue operations after the AS 532 A2 Cougar model was rejected for this purpose following extensive trials between 1996 and 1999. Naval Station Rota Spain. Naval Station Rota, also known as NAVSTA Rota, (IATA: ROZ, ICAO: LERT) (Spanish: Base Naval de Rota), is a Spanish naval base commanded by a Spanish Rear Admiral and fully funded by the United States of America.[1] Located in Rota in the Province of Cádiz, near the town of El Puerto de Santa María, NAVSTA Rota is the largest American military community in Spain and houses US Navy and US Marine Corps personnel.