AFP - Armed Forces of the Philippines

A black woman was arrested after a traffic stop in Texas. Days later, she died in a jail. At about 7 a.m. 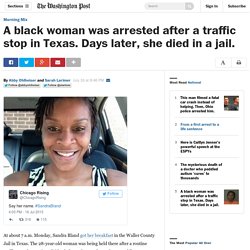 Monday, Sandra Bland got her breakfast in the Waller County Jail in Texas. The 28-year-old woman was being held there after a routine traffic stop the previous Friday led to a charge of assault on a public servant. About two hours later, Bland was dead. The official cause: Suicide by hanging. Now, many of her friends and relatives, along with a growing group of social-justice activists, are questioning how authorities say Bland died — and the circumstances surrounding the arrest that put her behind bars three days earlier.

“The Waller County Jail is trying to rule her death a suicide and Sandy would not have taken her own life,” one friend told the ABC affiliate in Chicago. At a news conference in Chicago, Bland’s sister told reporters on Thursday that she couldn’t believe Bland would take her own life. Infographic: Philippines' arms imports since 2001. Philippine military dismisses coup talk. MANILA - The Philippine military insisted Monday it remained loyal to President Benigno Aquino, responding to coup rumours that have swirled since a bungled security operation left 44 police commandos dead. 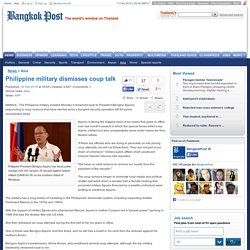 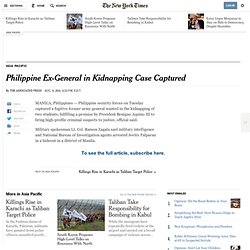 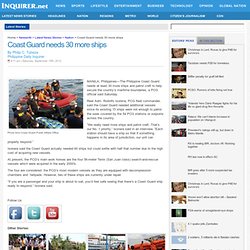 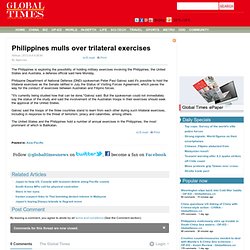 Philippine Department of National Defense (DND) spokesman Peter Paul Galvez said it's possible to hold the trilateral exercises as the Senate ratified in July the Status of Visiting Forces Agreement, which paves the way for the conduct of exercises between Australian and Filipino forces. "It's currently being studied how that can be done,"Galvez said.

Peace in Mindanao ? Three die in Philippine military helicopter crash. Purposeful remembrance. The Wikipedia entry on Proclamation No. 1081 issued by the late president Ferdinand Marcos 39 years ago does not quite capture the terror that held sway over the Philippines throughout the martial law and Marcos era. 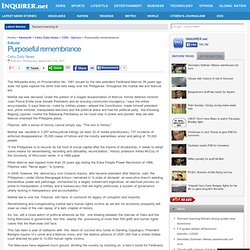 Martial law was declared “under the pretext of a staged assassination of Marcos’ former defense minister Juan Ponce Enrile (now Senate President) and an ensuing communist insurgency,” says the online encyclopedia. It says Marcos—ruled by military power—altered the Constitution, made himself president and prime minister, manipulated elections and the political arena and had his political party, the Kilusang Bagong Lipunan, control the Batasang Pambansa so he could stay in power and plunder. May we add: Marcos shackled the Philippine press. Filipinos with a sense of history cannot simply say, “The rest is history.” Philippines to boost naval firepower. Manila: The Philippines is expected to boost its sea presence and firepower with an escort vessel in July. 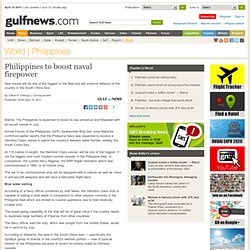 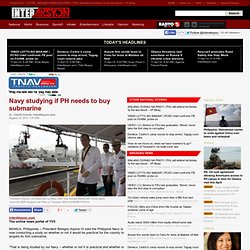 MALACANANG PHOTO InterAksyon.comThe online news portal of TV5 MANILA, Philippines -- President Benigno Aquino III said the Philippine Navy is now conducting a study on whether or not it would be practical for the country to acquire its first submarine. “That is being studied by our Navy – whether or not it is practical and whether or not it meets our needs,” Aquino said in an interview after touring the Navy’s latest and fastest surface combat-ready vessel, BRP Gregorio del Pilar.

Aquino noted that in 1998, a regional neighbor bought submarines from the Eastern bloc only to find out the vessels were not fit for tropical weather. AFP lists Marcos in Hall of Heroes. MANILA, Philippines? 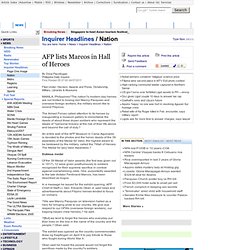 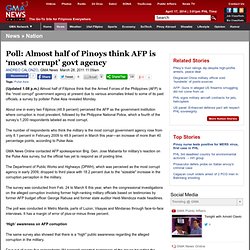 Almost half of Filipinos think that the Armed Forces of the Philippines (AFP) is the “most corrupt" government agency at present due to various anomalies linked to some of its past officials, a survey by pollster Pulse Asia revealed Monday. About one in every two Filipinos (48.9 percent) perceived the AFP as the government institution where corruption is most prevalent, followed by the Philippine National Police, which a fourth of the survey’s 1,200 respondents labeled as most corrupt. The number of respondents who think the military is the most corrupt government agency rose from only 8.1 percent in February 2009 to 48.9 percent in March this year—an increase of more than 40 percentage points, according to Pulse Asia.