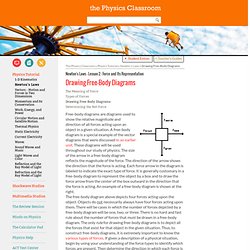 Each force arrow in the diagram is labeled to indicate the exact type of force. The free-body diagram above depicts four forces acting upon the object. Practice Apply the method described in the paragraph above to construct free-body diagrams for the various situations described below. A book is at rest on a tabletop. Answers Answers to the above exercise are shown here. 1. Return to Questions Return to Info on Free-body diagrams Return to on-line Force Description List 2. 3. 4. POE 2.1.3 Free Body Diagrams. 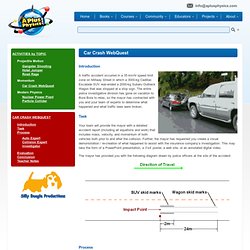 The entire police investigative division has gone on vacation to Bora Bora to relax, so the mayor has contracted with you and your team of experts to determine what happened and what traffic laws were broken. Task Your team will provide the mayor with a detailed accident report (including all equations and work) that includes mass, velocity, and momentum of both vehicles both prior to and after the collision.

Further, the mayor has requested you create a visual demonstration / re-creation of what happened to assist with the insurance company’s investigation. The mayor has provided you with the following diagram drawn by police officers at the site of the accident: Process Each group member will choose one of the following roles. Evaluation Conclusion Teacher Notes. Virtual Lab - Conservation of Momentum. Physics and Motion. The Shockwave Physics Studios consists of a collection of pages which feature interactive Shockwave files that simulate a physical situation. 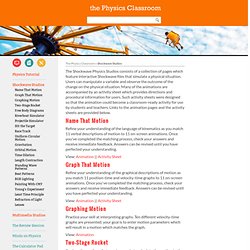 Users can manipulate a variable and observe the outcome of the change on the physical situation. Many of the animations are accompanied by an activity sheet which provides directions and procedural information for users. Such activity sheets were designed so that the animation could become a classroom-ready activity for use by students and teachers. Forces and Motion - Force, Motion, Friction.

Scientists understood why forces acted the way they did when objects touched. 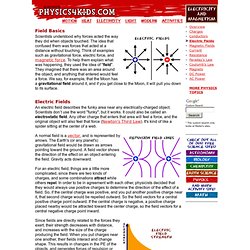 The idea that confused them was forces that acted at a distance without touching. Think of examples such as gravitational force, electric force, and magnetic force. To help them explain what was happening, they used the idea of "field". They imagined that there was an area around the object, and anything that entered would feel a force. We say, for example, that the Moon has a gravitational field around it, and if you get close to the Moon, it will pull you down to its surface. A normal field is a vector, and is represented by arrows. For an electric field, things are a little more complicated, since there are two kinds of charges, and some combinations attract while others repel.

Exploring Magnetic Fields. Purpose To reinforce the concept that magnets attract and repel items and exert a magnetic field that can vary in strength. 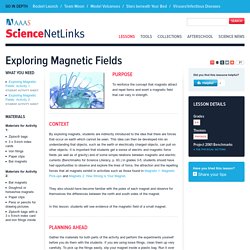 Context By exploring magnets, students are indirectly introduced to the idea that there are forces that occur on earth which cannot be seen. This idea can then be developed into an understanding that objects, such as the earth or electrically charged objects, can pull on other objects. It is important that students get a sense of electric and magnetic force fields (as well as of gravity) and of some simple relations between magnetic and electric currents (Benchmarks for Science Literacy, p. 93.) Electricity & Magnetism: Magnetic Fields. Magnetic fields are different from electric fields. 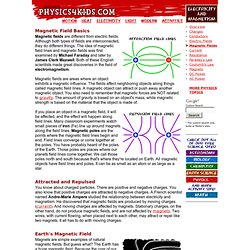