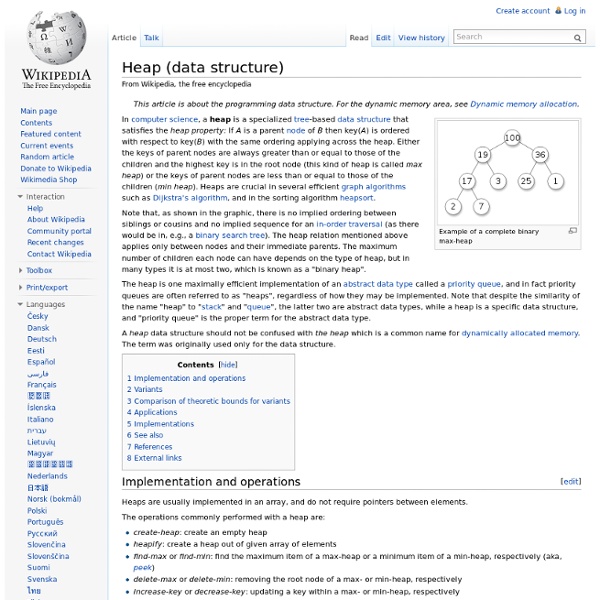 Heap spraying Operation[edit] A heap spray does not actually exploit any security issues but it can be used to make a vulnerability easier to exploit. A heap spray by itself cannot be used to break any security boundaries: a separate security issue is needed. Exploiting security issues is often hard because various factors can influence this process. Chance alignments of memory and timing introduce a lot of randomness (from the attacker's point of view). Exploits often use specific bytes to spray the heap, as the data stored on the heap serves multiple roles. History[edit] Implementation[edit] JavaScript[edit] VBScript[edit] Occasionally, VBScript is used in Internet Explorer to create strings by using the String function. ActionScript[edit] In July 2009, exploits were found to be using ActionScript to spray the heap in Adobe Flash.[9][10] Images[edit] HTML5[edit] Detection and prevention[edit] See also[edit] References[edit] External links[edit]

#Beginner - mIRC Commands Listing IRC Information..... Quick Reference to mIRC Commands Download here a zip/exe file which runs a program giving you easy access to these commands. Very Kewl! Download the text version of this page. / Recalls the previous command entered in the current window A new feature in mIRC allows you to minimize mIRC and lock it with a password for strange eyes. Shift+Mouse on Switchbar - Did you know that you can 'fast-close' a window in mIRC by clicking its button on the Switchbar while holding the SHIFT key pressed down?? /uwho - Ever wondered who you're actually speaking with? ALT + Minus - Press the key combination ALT and 'minus' simultaneous to access the windows' System Menu's (found under that little horizontal bar in every top left corner of ANY window in mIRC and windows). /clear - Use the /clear command to flush away all old text you dont want to read again. Doskey - Remember that old doskey feature under DOS?

WCF and MSMQ - Dennis van der Stelt It’s been a while since I blogged about one of my favorite topics, Windows Communication Foundation. In this article I’ll explain how you can use MSMQ with WCF to really process messages asynchronously. It’s unbelievable how easy this is. Read my complete WCF series on how to set up your first service. The idea in this example is that we have to send some e-mails, but we don’t want that to be done immediately. We’ll setup the service with a Console Application. 1: Make sure MSMQ is installed. MSMQ must of course be installed. On the right you can see I’ve turned on everything. 2: Setup a class library. Create a new project and make it a class library. [ServiceContract(Namespace=" SessionMode=SessionMode.NotAllowed)] public interface ISendMail [OperationContract(Name = "SubmitMessage", IsOneWay = true)] void SubmitMessage(MailMessage message); Now we need an implementation for our service. public class SendMailService : ISendMail if (! <endpoint

Groovy (programming language) Groovy 1.0 was released on January 2, 2007, and Groovy 2.0 in July, 2012. Groovy 3.0 is planned for release in early 2014, with support for Java 8 features and a new Meta Object Protocol.[1] Since version 2, Groovy can also be compiled statically, offering type inference and performance close to, or even greater than, Java's.[2][3] Groovy is backed by GoPivotal, which comprises the team from VMware. VMware acquired SpringSource, which acquired G2One, the Groovy and Grails company. In November 2008, SpringSource acquired the Groovy and Grails company (G2One).[7] In August 2009 VMWare acquired SpringSource.[8] In March 2004, Groovy had been submitted to the Java Community Process as JSR 241 [10] and accepted by ballot. On July 2, 2012, Groovy 2.0 was released, which, among other new features, added static compilation and a static type checker to Groovy. Most valid Java files are also valid Groovy files. Groovy's syntax can be made far more compact than Java. can be expressed in Groovy as:

Heap: Pleasures and Pains Murali R. Krishnan Microsoft Corporation February 1999 Summary: Discusses common heap performance problems and how to protect against them. (9 printed pages) Introduction Are you a happy-go-lucky user of dynamically allocated C/C++ objects? What Is a Heap? (If you already know what a heap is, you can jump ahead to the section "What Are Common Heap Performance Problems?") A heap is used for allocating and freeing objects dynamically for use by the program. The number and size of objects needed by the program are not known ahead of time. A heap uses parts of memory outside of what is allocated for the code and stack during run time. GlobalAlloc/GlobalFree: Heap calls that talk directly to the per-process default heap. LocalAlloc/LocalFree: Heap calls that talk directly to the per-process default heap. COM's IMalloc allocator (or CoTaskMemAlloc / CoTaskMemFree): Functions use the default per-process heap. The Windows heap is a thin layer surrounding the Windows run-time allocator. Summary

What is foo? - Definition from WhatIs.com Just as economists sometimes use the term "widget" as the ultimate substitute for "something" that is being measured, programmers tend to use the term "foo" (pronounced FOO) as a universal substitute for something real when discussing ideas or presenting examples. Suppose you are defining a template for any group of programmers to follow when creating a new user command, you might specify that the syntax for the command should be in the form: Command foo (arg1, arg2) where the "foo" would mean "the name you give to this command." In other words, "foo" is a nonsense kind of placeholder for some value that will be provided when using this template to define a real command. Foo or any such word used this way is formally known as a metasyntactic variable. Also see FUBAR. Contributor(s): Kevin Barrett and R. This was last updated in December 2006 Email Alerts Register now to receive SearchSOA.com-related news, tips and more, delivered to your inbox.

What is heap and stack? The stack is a place in the computer memory where all the variables that are declared and initialized before runtime are stored. The heap is the section of computer memory where all the variables created or initialized at runtime are stored. What are the memory segments? The distinction between stack and heap relates to programming. When you look at your computer memory, it is organized into three segments: text (code) segmentstack segmentheap segment The text segment (often called code segment) is where the compiled code of the program itself resides. Now let's get to some details. What is stack? The two sections other from the code segment in the memory are used for data. Data is stored in stack using the Last In First Out (LIFO) method. What is heap? On the other hand, heap is an area of memory used for dynamic memory allocation. The stack is much faster than the heap but also smaller and more expensive. Heap and stack from programming perspective Why is stack and heap important?

Taste for Makers February 2002 I was talking recently to a friend who teaches at MIT. His field is hot now and every year he is inundated by applications from would-be graduate students. "A lot of them seem smart," he said. Taste. Mathematicians call good work "beautiful," and so, either now or in the past, have scientists, engineers, musicians, architects, designers, writers, and painters. For those of us who design things, these are not just theoretical questions. If you mention taste nowadays, a lot of people will tell you that "taste is subjective." Most of us are encouraged, as children, to leave this tangle unexamined. Your mother at this point is not trying to teach you important truths about aesthetics. Like many of the half-truths adults tell us, this one contradicts other things they tell us. What goes through the kid's head at this point? Saying that taste is just personal preference is a good way to prevent disputes. Whatever job people do, they naturally want to do better.

Enabling SSL for a WCF Service We Recommend These Resources Last week a reader mailed me with some questions about my “WCF over HTTPS” blog post, which I wrote almost 3 years ago. I created some sample code to help him enable SSL for a WCF service. Let’s get started… Step 1 – The Service First we are going to create a simple and easy-to-use WCF service. Add a reference to the System.ServiceModel and System.Runtime.Serialization assemblies to the CustomerService project. Add a new interface called ICustomerService to the project that defines the service contract. 1. 2.public interface ICustomerService 4. 5. The service returns a collection of customers. 01. 02.public class Customer 04. 05. public Guid Id { get; set; } 07. 08. public string FirstName { get; set; } 10. 11. public string LastName { get; set; } Go ahead and add a file called Customer.cs. The actual service implementation is very simple. 01. 02.public class CustomerService : ICustomerService 04. private IEnumerable<Customer> LoadCustomers() 13. return customers; 01. 02. 1.

Don't repeat yourself Dry or dryness denotes a lack of water. It may also refer to: Common meanings[edit] Music[edit] Places[edit] Other uses[edit] See also[edit] All pages beginning with "Dry"