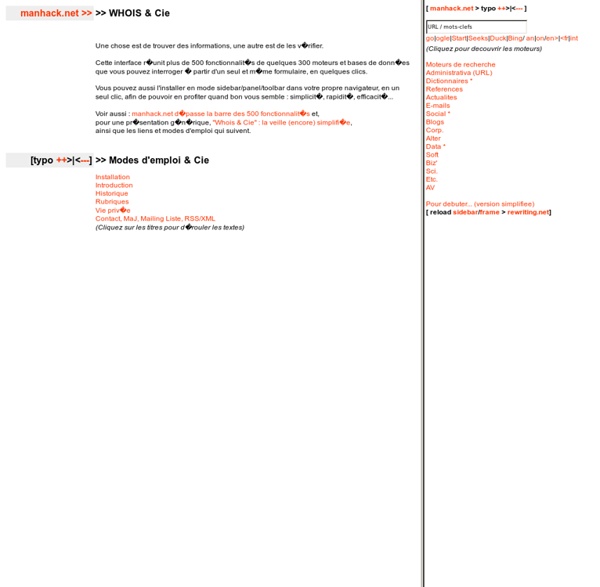 Google hacking Basics[edit] One can even retrieve the username and password list from Microsoft FrontPage servers by inputting the given microscript in Google search field: "#-Frontpage-" inurl: administrators.pwd or filetype: log inurl password login NSA files decoded: Edward Snowden's surveillance revelations explained Two factors opened the way for the rapid expansion of surveillance over the past decade: the fear of terrorism created by the 9/11 attacks and the digital revolution that led to an explosion in cell phone and internet use. But along with these technologies came an extension in the NSA’s reach few in the early 1990s could have imagined. Details that in the past might have remained private were suddenly there for the taking. Chris Soghoian Principal technologist, ACLU

Creating an Effective Sock Puppet for OSINT Investigations – Introduction – Jake Creps Introduction and Philosophy In recent light of the epic failure by Surefire Intelligence to frame Robert Mueller for sexual assault allegations, I feel it’s important to discuss and unpack how to make a good sock puppet for OSINT operations. If you aren’t familiar, just google Jacob Wohl or Surefire Intelligence and you will likely be flooded with information about the scandal. For further details on the unraveling of the socks Wohl made, check out Aric Toler’s threat on Twitter @arictoler from Bellingcat. Now, without further ado, let’s get started on constructing a sock puppet for OSINT investigations.

Friends and enemies in the Middle East. Who is connected to whom? - interactive As the US and UK are set to again commit to military involvement in the Middle East, this interactive visualises the intricate, complex and sometimes hidden relationships and alliances across the region. Its tangled, opened state is meant as a kind of visual joke, showing how its fabric defies simple solutions. You can filter relationship types ‘on’ and ‘off’ in the bottom left and also rollover and click on different players to get a clarified view.

Mastering Google Search Operators in 67 Easy Steps See Also:• Google Search Operators - Best Practices• 25 Killer Combos for Google's Site: Operator Any SEO worth their sustainably harvested pink Himalayan salt knows that Google offers a variety of advanced search operators – special commands that take you above and beyond regular text searches. Learning search operators is a bit like learning chess, though. It's easy to memorize how each piece moves, but that's about 1% of your path toward mastery.

20 tools and resources every journalist should experiment with Tools have always come from the need to carry out a specific task more effectively. It's one of the main differences between human beings and the rest of the animal kingdom. We may still be slaves to the same old evolutionary urges but we sure know how to eat noodles in style. In journalism, an abstract tool for uncovering the most interesting and insightful information about society, we can generally boil the workflow down to four stages: finding, reporting, producing and distributing stories. So with that in mind, here are a range of tools which will – hopefully – help you carry out your journalism tasks more effectively. 1. How to Search Twitter - The Best Twitter Search Tricks The Twitter Archiver and Twitter Bots app fire each time a new tweet is found that match your search query. You can write simple search queries (like #Oscars) or more complex query (like obama min_retweets:10 filter:news) that uses one or more Twitter search operators. Here’s a complete list of Twitter search operators that can help you perform more accurate searches on Twitter: from:BarackObama All tweets sent by a particular Twitter user filter:verified cool OR amazing Only show tweets from verified Twitter accounts (with the blue tick)

Experts: Spy used AI-generated face to connect with targets LONDON (AP) — Katie Jones sure seemed plugged into Washington’s political scene. The 30-something redhead boasted a job at a top think tank and a who’s-who network of pundits and experts, from the centrist Brookings Institution to the right-wing Heritage Foundation. She was connected to a deputy assistant secretary of state, a senior aide to a senator and the economist Paul Winfree, who is being considered for a seat on the Federal Reserve. But Katie Jones doesn’t exist, The Associated Press has determined. Instead, the persona was part of a vast army of phantom profiles lurking on the professional networking site LinkedIn. And several experts contacted by the AP said Jones’ profile picture appeared to have been created by a computer program.

Boolean basics: How to write a search query for newsgathering that works When searching for newsworthy content online, you’ve got to know exactly what you’re looking for and have the skills to find it. This is where Boolean search queries help. These strings of words allow you to cut through the usual social media chatter by upgrading a default search to a multifaceted, specific search to find more precise snippets of information. In this quick guide, we run through the basics of what you need to know to search social media for effective newsgathering. A quick note: platforms vary.

How to recognize fake AI-generated images - Kyle McDonald - Medium In 2014 machine learning researcher Ian Goodfellow introduced the idea of generative adversarial networks or GANs. “Generative” because they output things like images rather than predictions about input (like “hotdog or not”); “adversarial networks” because they use two neural networks competing with each other in a “cat-and-mouse game”, like a cashier and a counterfeiter: one trying to fool the other into thinking it can generate real examples, the other trying to distinguish real from fake. The first GAN images were easy for humans to identify. Consider these faces from 2014.

How to Find the Most Recent Satellite Imagery Anywhere on Earth At Azavea, we help our clients use machine learning and satellite imagery to map places all over the world—we’ve trained AI to map everything from buildings, to bodies of water, to solar panels and crosswalks. But every project starts with the same question: based on what you care about in the imagery, what’s the newest, cheapest, and highest-resolution imagery we can find? Today, we’re sharing our simple tool for triaging these requests along with plenty of links to help guide you to the right image for your needs!