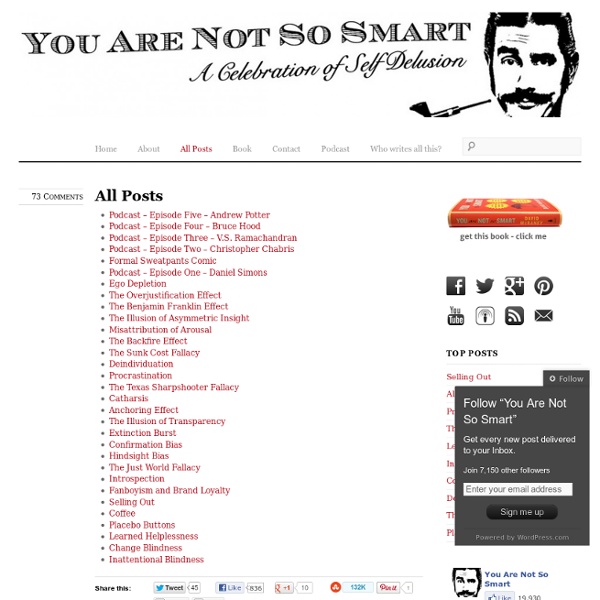 Authorama - Public Domain Books Procrastination The Misconception: You procrastinate because you are lazy and can’t manage your time well. The Truth: Procrastination is fueled by weakness in the face of impulse and a failure to think about thinking. Netflix reveals something about your own behavior you should have noticed by now, something which keeps getting between you and the things you want to accomplish. If you have Netflix, especially if you stream it to your TV, you tend to gradually accumulate a cache of hundreds of films you think you’ll watch one day. Take a look at your queue. Psychologists actually know the answer to this question, to why you keep adding movies you will never watch to your growing collection of future rentals, and it is the same reason you believe you will eventually do what’s best for yourself in all the other parts of your life, but rarely do. A study conducted in 1999 by Read, Loewenstein and Kalyanaraman had people pick three movies out of a selection of 24. You weigh yourself. How would you pick? Links:

What would happen if I drilled a tunnel through the center of th" Want to really get away from it all? The farthest you can travel from home (and still remain on Earth) is about 7,900 miles (12,700 kilometers) straight down, but you'll have to journey the long way round to get there: 12,450 miles (20,036 kilometers) over land and sea. Why not take a shortcut, straight down? You can get there in about 42 minutes -- that's short enough for a long lunch, assuming you can avoid Mole Men, prehistoric reptiles and underworld denizens en route. Granted, most Americans would end up in the Indian Ocean, but Chileans could dine out on authentic Chinese, and Kiwis could tuck into Spanish tapas for tea [sources: NOVA; Shegelski]. Of course, you'd be in for a rough ride. For sake of argument (and survival) let's pretend the Earth is a cold, uniform, inert ball of rock. At the Earth's surface, gravity pulls on us at 32 feet (9.8 meters) per second squared. You're still moving at a heck of a clip, though, so don't expect to stop there.

The Art of Gina Kiel - Draw As A Maniac Gina Kiel is an illustrator based in Wellington the Capital of New Zealand, and she has the ability to wield both traditional and digital media in order to create impressive work across a seemingly impossible range of styles. Check her at www.ginakiel.com Enjoy The Gallery Help us grow and remove all ads Leave a Reply Harry Frankfurt's "On Bullshit" One of the most salient features of our culture is that there is so much bullshit. Everyone knows this. Each of us contributes his share. But we tend to take the situation for granted. Most people are rather confident of their ability to recognize bullshit and to avoid being taken in by it. So the phenomenon has not aroused much deliberate concern, or attracted much sustained inquiry. Another worthwhile source is the title essay in The Prevalence of Humbug by Max Black. Humbug: deceptive misrepresentation, short of lying, especially by pretentious word or deed, of somebody’s own thoughts, feelings, or attitudes. A very similar formulation might plausibly be offered as enunciating the essential characteristics of bullshit. Deceptive misrepresentation: This may sound pleonastic. Short of lying: It must be part of the point of saying that humbug is “short of lying,” that while it has some of the distinguishing characteristics of lies, there are others that it lacks.

Absolute Shakespeare - plays, quotes, summaries, essays... 10 Psychological Experiments That Went Horribly Wrong Psychology as we know it is a relatively young science, but since its inception it has helped us to gain a greater understanding of ourselves and our interactions with the world. Many psychological experiments have been valid and ethical, allowing researchers to make new treatments and therapies available, and giving other insights into our motivations and actions. Sadly, others have ended up backfiring horribly — ruining lives and shaming the profession. 10. Prisoners and guards In 1971, social psychologist Philip Zimbardo set out to interrogate the ways in which people conform to social roles, using a group of male college students to take part in a two-week-long experiment in which they would live as prisoners and guards in a mock prison. 9. Wendell Johnson, of the University of Iowa, who was behind the study Theodore Kaczynski, the Unabomber, also seen top 7. 6. The Milgram Experiment underway 5. 4. A rhesus monkey infant in one of Harlow's isolation chambers 3. 2. 1. David Reimer

10 Thirty-Day Challenges That Nobody Wants to Take A week ago I asked my friends on Facebook about the craziest thirty-day challenges, and I got quite a few interesting ideas. I’m posting them here today, along with my own contributions. These are all challenges that you won’t usually think about, yet some of them can be very powerful. I personally want to try some in the near future. If you want to give them a shot as well, I’d love to hear about your experience, and I’d offer you a spot here to share it if you don’t have a blog. Enough talk for now, below are 10 thirty-day challenges that nobody wants to take: No smoking, coffee or alcohol. What do you think of these challenges?

What Mimicking One's Language Style May Mean About the Relationship Oct. 4, 2010 AUSTIN, Texas — People match each other's language styles more during happier periods of their relationship than at other times, according to new research from psychologists at The University of Texas at Austin. "When two people start a conversation, they usually begin talking alike within a matter of seconds," says James Pennebaker, psychology professor and co-author of the study. "This also happens when people read a book or watch a movie. As soon as the credits roll, they find themselves talking like the author or the central characters." This tendency is called language style matching or LSM. "Because style matching is automatic," says Ireland, a psychology graduate student, "it serves as an unobtrusive window into people's close relationships with others." Ireland and Pennebaker tracked the language used by almost 2,000 college students as they responded to class assignments written in very different language styles.