The Barrister Magazine - Unconscious Bias at Play behind Closed Doors. By Snéha Khilay, Professional Development Consultant Blue Tulip Training “If you are neutral in situations of injustice, you have chosen the side of the oppressor. 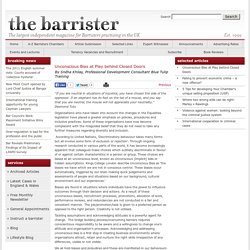 If an elephant has its foot on the tail of a mouse, and you say that you are neutral, the mouse will not appreciate your neutrality.” Desmond Tutu Organisations who have taken into account the changes in the Equalities legislation have placed a greater emphasis on policies, procedures and inclusive practices. Some of these organisations have now become complacent with the misguided belief that they do not need to take any further measures regarding diversity and inclusion. According to United Nations, 'Discriminatory behaviour takes many forms but all involve some form of exclusion or rejection'. Biases are found in situations where individuals have the power to influence outcomes through their decision and actions. Cognitive Biases. The Hidden Brain: How Ocean Currents Explain Our Unconscious Social Biases.

Things You Cannot Unsee (And What That Says About Your Brain) The forensic laboratories that are paid per conviction. A disquieting paper has been published in the journal Criminal Justice Ethics, that suggests the decisions of forensic scientists are being influenced by payments for convictions.

The authors Roger Koppl and Meghan Sacks, cite as an example one laboratory for which collection of court costs following guilty verdicts is the only stable source of funding. According to the paper, in Washington those found guilty following forensic evidence against them must pay a $100 fee, in Kansas the fee is $400, in North Carolina there is a fee of $600 for those found guilty following DNA evidence, similar rules apply in Alabama, New Mexico, Kentucky, New Jersey, Virginia, Illinois and Michigan. Evidence-based justice: Corrupted memory. Image Slideshow Since her first case in 1974, Elizabeth Loftus has testified in and advised on hundreds of criminal cases, often urging judges and jurors to consider the fallibility of memory.Brad Swonetz/Redux/Eyevine 1976: Ted Bundy was put on trial for attempted kidnapping, and Loftus testified on his behalf. 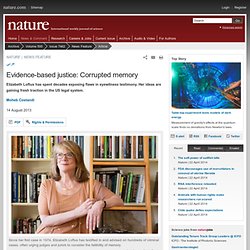 Bundy was found guilty, but escaped custody. He eventually admitted to 30 murders.AP 1988: John Demjanjuk was accused of being 'Ivan the Terrible', a Second World War concentration-camp guard. Loftus refused to testify, in case her involvement hurt her Jewish family and friends.SVEN NACKSTRAND/AFP/Getty 1990: George Franklin, whose daughter claimed to have recovered a lost memory of him raping her and killing her friend, was found guilty despite Loftus's testimony. His conviction was later overturned on appeal.Russell Curtis/AP 1992: Los Angeles police officers accused of beating California resident Rodney King were acquitted, sparking riots. Forensic Experts Pick Sides, Research Shows. One of the Original Rorschach Ink Blots.

Image made by Hermann Rorschach. Courtesy of Wikimedia CommonsForensic psychologists and psychiatrists are ethically bound to be impartial when performing evaluations or providing expert opinions in court. But new research suggests that courtroom experts’ evaluations may be influenced by whether their paycheck comes from the defense or the prosecution. The research is published in Psychological Science, a journal of the Association for Psychological Science. Urt bullies put pressure on experts to lie, says scientist. Forensic experts 'biased towards side which pays them' 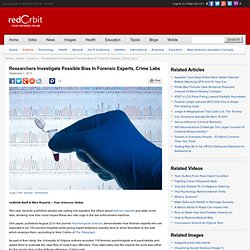 One paper, published August 22 in the journal Psychological Science, demonstrates how forensic experts who are expected to be 100 percent impartial while giving expert testimony actually tend to show favoritism to the side which employs them, according to Nick Collins of The Telegraph. As part of their study, the University of Virginia authors recruited 118 forensic psychologists and psychiatrists and asked them to evaluate the case files of violent sex offenders. They alternately told the experts the work was either for the prosecution or the defense attorneys, Collins said.

“Most expert witnesses believe they perform their job objectively. Source: redOrbit Staff & Wire Reports – Your Universe Online. You Are Not So Smart: A Field Guide to the Brain's Guile. By Maria Popova The science of why 600 Facebook “friends” are an illusion, or why brand loyalty is a product of the ego. 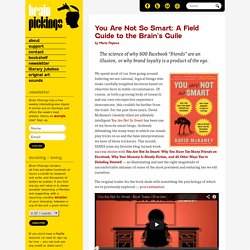 Our Faulty Cognitive Instruments « lilaclounge. Eyewitness identification is the leading cause of false conviction. 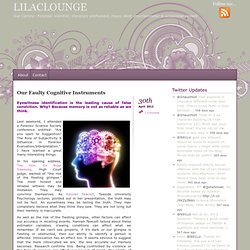 How Eyewitnesses Can Send Innocents to Jail. Eyewitness misidentifications were the single greatest cause of flawed evidence in the 250 innocent exonerations I studied. 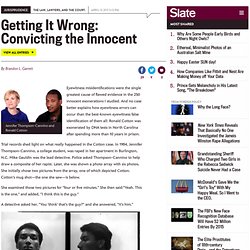 And no case better explains how eyewitness errors can occur than the best-known eyewitness false identification of them all: Ronald Cotton was exonerated by DNA tests in North Carolina after spending more than 10 years in prison. Trial records shed light on what really happened in the Cotton case. In 1984, Jennifer Thompson-Cannino, a college student, was raped in her apartment in Burlington, N.C. Mike Gauldin was the lead detective. Police asked Thompson-Cannino to help draw a composite of her rapist. She examined those two pictures for "four or five minutes. " Eyewitness Testimony Overshadowed by Forensics. Forensic sciences are 'fraught with error' Public release date: 22-Apr-2013 [ Print | E-mail Share ] [ Close Window ] Contact: Irene Kanter-Schlifkei.kanter@elsevier.com 31-204-853-359Elsevier Amsterdam, April 22, 2013 – A target article recently published in Journal of Applied Research in Memory and Cognition (JARMAC) reviews various high-profile false convictions. 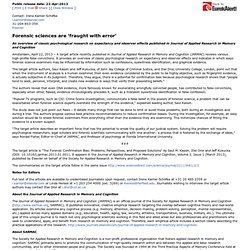