Cognitive Chaos. ThesisBrain Activiy can be modelled as a fractal topology interfacing both random and determined forces. 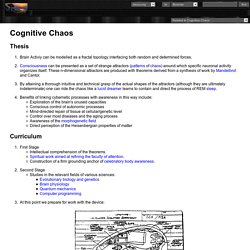 Consciousness can be presented as a set of strange attractors (patterns of chaos) around which specific neuronal activity organizes itself. These n-dimensional attractors are produced with theorems derived from a synthesis of work by Mandelbrot and Cantor. By attaining a thorough intuitive and technical grasp of the actual shapes of the attractors (although they are ultimately indeterminate) one can ride the chaos like a lucid dreamer learns to contain and direct the process of REM sleep. From Ong's Hat, Gateway to the Dimensionsd e o x y r i b o n u c l e i c h y p e r d i m e n s i o n. 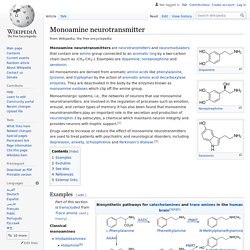 All monoamines are derived from aromatic amino acids like phenylalanine, tyrosine, tryptophan, and the thyroid hormones by the action of aromatic amino acid decarboxylase enzymes. Agonist. Agonists activating hypothetical receptors. 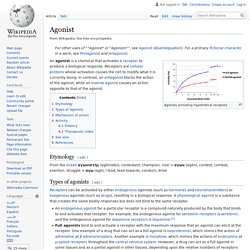 Efficacy spectrum of receptor ligands. Types of agonists[edit] An endogenous agonist for a particular receptor is a compound naturally produced by the body that binds to and activates that receptor. Norepinephrine. We ask you, humbly, to help. 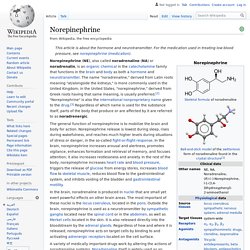 Hi reader in Canada, it seems you use Wikipedia a lot; that's great! It's a little awkward to ask, but this Wednesday we need your help. The world is confiding in Wikipedia for neutral information more than ever, but less than 1% of readers donate. Epinephrine. Physiological effects[edit] The adrenal medulla is a minor contributor to total circulating catecholamines (L-DOPA is at a higher concentration in the plasma),[11] though it contributes over 90% of circulating epinephrine. 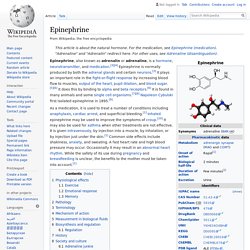 Little epinephrine is found in other tissues, mostly in scattered chromaffin cells. Following adrenalectomy, epinephrine disappears below the detection limit in the blood stream.[12] Dopamine agonist. A dopamine agonist is a compound that activates dopamine receptors in the absence of that receptor's physiological ligand, the neurotransmitter dopamine. 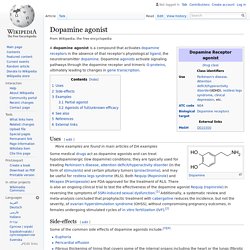 Dopamine agonists activate signaling pathways through the dopamine receptor and trimeric G-proteins, ultimately leading to changes in gene transcription. Uses[edit] More examples are found in main articles of DA examples Some medical drugs act as dopamine agonists and can treat hypodopaminergic (low dopamine) conditions; they are typically used for treating Parkinson's disease, attention deficit/hyperactivity disorder (in the form of stimulants) and certain pituitary tumors (prolactinoma), and may be useful for restless legs syndrome (RLS).

Wakefulness-promoting agent. The prototypical eugeroic is modafinil, and other drugs include adrafinil and armodafinil. 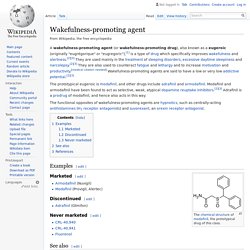 Modafinil and armodafinil have been found to act as selective, weak, atypical dopamine reuptake inhibitors.[2][3] Adrafinil is a prodrug of modafinil, and hence also acts in this way. The functional opposites of wakefulness-promoting agents are hypnotics, such as centrally-acting antihistamines (H1 receptor antagonists) and suvorexant, an orexin receptor antagonist. Examples[edit] Marketed[edit] Modafinil. Medication which increases wakefulness Modafinil, sold under the brand name Provigil among others, is a medication to treat sleepiness due to narcolepsy, shift work sleep disorder, or obstructive sleep apnea.[2][6] While it has seen off-label use as a purported cognitive enhancer, the research on its effectiveness for this use is not conclusive.[7][8] It is taken by mouth.[2] 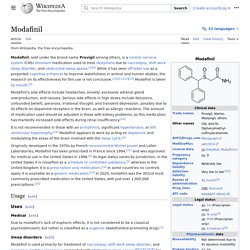 Armodafinil. Armodafinil (trade name Nuvigil) is the enantiopure of the wakefulness-promoting agent,[1] or eugeroic, modafinil (Provigil). 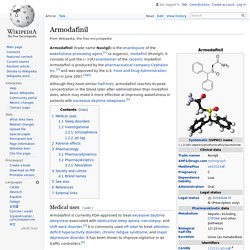 It consists of just the (−)-(R)-enantiomer of the racemic modafinil. Armodafinil is produced by the pharmaceutical company Cephalon Inc.[2] and was approved by the U.S. Food and Drug Administration (FDA) in June 2007.[3][4] Although they have similar half-lives, armodafinil reaches its peak concentration in the blood later after administration than modafinil does, which may make it more effective at improving wakefulness in patients with excessive daytime sleepiness.[5] Medical uses[edit] Desipramine. Desipramine (also known as desmethylimipramine) is a tricyclic antidepressant (TCA). 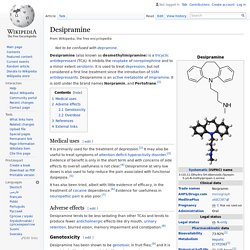 It inhibits the reuptake of norepinephrine and to a minor extent serotonin. It is used to treat depression, but not considered a first line treatment since the introduction of SSRI antidepressants. L-DOPA. Medical use[edit] In addition, L-DOPA, co-administered with a peripheral DDCI, has been investigated as a potential treatment for restless leg syndrome. However, studies have demonstrated "no clear picture of reduced symptoms".[8] The two types of response seen with administration of L-DOPA are: The short-duration response is related to the half-life of the drug.The longer-duration response depends on the accumulation of effects over at least two weeks, during which ΔFosB accumulates in nigrostriatal neurons.

Amitriptyline. Amitriptyline, sold under the brand name Elavil among others, is a medicine used to treat a number of mental illnesses.[2] This includes major depressive disorder and anxiety disorder, and less commonly attention deficit hyperactivity disorder and bipolar disorder.[2][3] Other uses include prevention of migraines, treatment of neuropathic pain such as fibromyalgia and postherpetic neuralgia, and less commonly insomnia.[2][4] It is taken by mouth.[2] Common side effects include a dry mouth, trouble seeing, low blood pressure on standing, sleepiness, and constipation. Methylphenidate. Methylphenidate (trade names Concerta, Methylin, Ritalin, Equasym XL) is a psychostimulant drug and substituted phenethylamine approved for treatment of attention-deficit hyperactivity disorder (ADHD), postural orthostatic tachycardia syndrome and narcolepsy.

The original patent was owned by CIBA, now Novartis Corporation. It was first licensed by the U.S. Food and Drug Administration (FDA) in 1955 for treating what was then known as hyperactivity. Prescribed to patients beginning in 1960, the drug became heavily prescribed in the 1990s, when the diagnosis of ADHD itself became more widely accepted.[1][2] Trimipramine. Piracetam. Pramiracetam. Pramiracetam is a central nervous system stimulant and nootropic agent belonging to the racetam family of drugs. Donepezil. Donepezil, marketed under the trade name Aricept, is a medication used in the palliative treatment of Alzheimer's disease.[1][2] Donepezil is used to improve cognition and behavior of people with Alzheimer's, but does not slow the progression of or cure the disease.[3]

The ups and downs of cognitive enhancers.