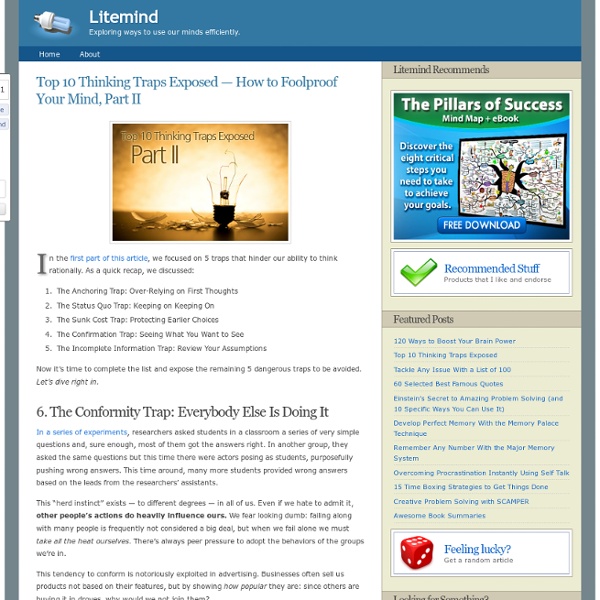 In the first part of this article, we focused on 5 traps that hinder our ability to think rationally. As a quick recap, we discussed: The Anchoring Trap: Over-Relying on First ThoughtsThe Status Quo Trap: Keeping on Keeping OnThe Sunk Cost Trap: Protecting Earlier ChoicesThe Confirmation Trap: Seeing What You Want to SeeThe Incomplete Information Trap: Review Your Assumptions Now it’s time to complete the list and expose the remaining 5 dangerous traps to be avoided. Let’s dive right in. 6. In a series of experiments, researchers asked students in a classroom a series of very simple questions and, sure enough, most of them got the answers right. This “herd instinct” exists — to different degrees — in all of us. This tendency to conform is notoriously exploited in advertising. Conformity is also one of the main reasons why once a book makes into a well-known best-sellers list, it tends to “lock in” and continue there for a long time. What can you do about it? 7. 8. John Riley is a legend.

10 More Common Faults in Human Thought | Listverse Humans This list is a follow up to Top 10 Common Faults in Human Thought. Thanks for everyone’s comments and feedback; you have inspired this second list! It is amazing that with all these biases, people are able to actually have a rational thought every now and then. The confirmation bias is the tendency to look for or interpret information in a way that confirms beliefs. The Availability heuristic is gauging what is more likely based on vivid memories. Illusion of Control is the tendency for individuals to believe they can control or at least influence outcomes that they clearly have no influence on. Interesting Fact: when playing craps in a casino, people will throw the dice hard when they need a high number and soft when they need a low number. The Planning fallacy is the tendency to underestimate the time needed to complete tasks. Interesting Fact: “Realistic pessimism” is a phenomenon where depressed or overly pessimistic people more accurately predict task completion estimations.

Healthy Thinking Skills Research shows that how or what we think directly affects our moods and how we feel. Contrary to popular belief, events or situations do not determine your mood. Instead, how you think about the event or situation typically determines mood. Men are not worried by things, but by their ideas about things. -Epictetus, about 60 AD It is very obvious that we are not influenced by "facts" but by our interpretation of the facts. -Alfred Adler If thinking affects our feelings, we can change how we feel by changing how we think. Change your negative thinking to positive thinking and thereby change your negative moods to positive moods. 1. 2. 3. 4. 5. 6. 7. 8. Don’t get stuck. Suggested exercise: Rank the styles that apply to you and the next time that you experience a negative mood check and see if this distorted thinking pattern is in play. 1. 2. 3. 4. 5. 6. 7. 8. 9. 10. 11. 12. 13. 14. 15. References *From Thoughts & Feelings by McKay, Davis, & Fanning. Resources: Learned Optimism, by Martin E.

Critical Thinking On The Web Top Ten Argument Mapping Tutorials. Six online tutorials in argument mapping, a core requirement for advanced critical thinking.The Skeptic's Dictionary - over 400 definitions and essays. The Fallacy Files by Gary Curtis. Best website on fallacies. Butterflies and Wheels. What is critical thinking? Nobody said it better than Francis Bacon, back in 1605: For myself, I found that I was fitted for nothing so well as for the study of Truth; as having a mind nimble and versatile enough to catch the resemblances of things … and at the same time steady enough to fix and distinguish their subtler differences; as being gifted by nature with desire to seek, patience to doubt, fondness to meditate, slowness to assert, readiness to consider, carefulness to dispose and set in order; and as being a man that neither affects what is new nor admires what is old, and that hates every kind of imposture. A shorter version is the art of being right. More definitions... Program for Critical Thinking 6 Dec 21 May

Top 10 Common Faults In Human Thought | Listverse Humans The human mind is a wonderful thing. Cognition, the act or process of thinking, enables us to process vast amounts of information quickly. For example, every time your eyes are open, you brain is constantly being bombarded with stimuli. You may be consciously thinking about one specific thing, but you brain is processing thousands of subconscious ideas. The Gambler’s fallacy is the tendency to think that future probabilities are altered by past events, when in reality, they are not. Reactivity is the tendency of people to act or appear differently when they know that they are being observed. Pareidolia is when random images or sounds are perceived as significant. Interesting Fact: the Rorschach Inkblot test was developed to use pareidolia to tap into people’s mental states. Self-fulfilling Prophecy Self-fulfilling prophecy is engaging in behaviors that obtain results that confirm existing attitudes. Interesting Fact: Economic Recessions are self-fulfilling prophecies.

47 Mind-Blowing Psychological Facts You Should Know About Yourself I’ve decided to start a series called 100 Things You Should Know about People. As in: 100 things you should know if you are going to design an effective and persuasive website, web application or software application. Or maybe just 100 things that everyone should know about humans! The order that I’ll present these 100 things is going to be pretty random. Dr. <div class="slide-intro-bottom"><a href=" Military Must Prep Now for 'Mutant' Future, Researchers Warn | Danger Room Lockheed Martin tests its Human Universal Load Carrier exoskeleton. Photo: Lockheed Martin The U.S. military is already using, or fast developing, a wide range of technologies meant to give troops what California Polytechnic State University researcher Patrick Lin calls “mutant powers.” But the risk, ethics and policy issues arising out of these so-called “military human enhancements” — including drugs, special nutrition, electroshock, gene therapy and robotic implants and prostheses — are poorly understood, Lin and his colleagues Maxwell Mehlman and Keith Abney posit in a new report for The Greenwall Foundation (.pdf), scheduled for wide release tomorrow. If we don’t, we could find ourselves in big trouble down the road. “With military enhancements and other technologies, the genie’s already out of the bottle: the benefits are too irresistible, and the military-industrial complex still has too much momentum,” Lin says in an e-mail. The ethical concerns certainly have precedent.