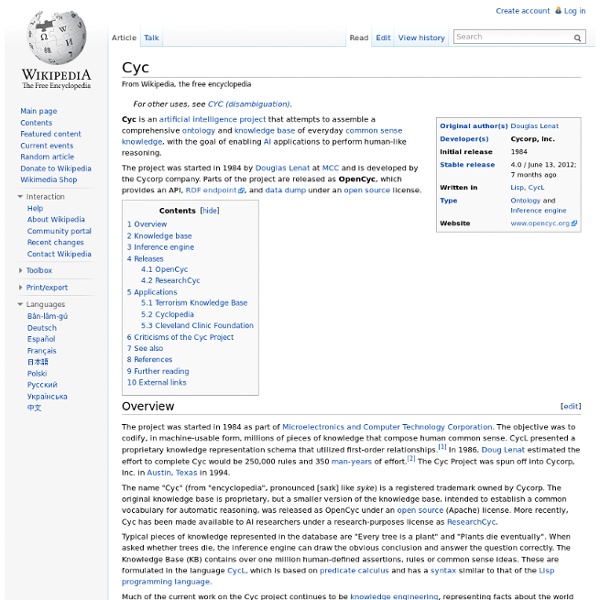 The project was started in 1984 by Douglas Lenat at MCC and is developed by the Cycorp company. Parts of the project are released as OpenCyc, which provides an API, RDF endpoint, and data dump under an open source license. Overview[edit] The project was started in 1984 as part of Microelectronics and Computer Technology Corporation. The name "Cyc" (from "encyclopedia", pronounced [saɪk] like syke) is a registered trademark owned by Cycorp. Typical pieces of knowledge represented in the database are "Every tree is a plant" and "Plants die eventually". Much of the current work on the Cyc project continues to be knowledge engineering, representing facts about the world by hand, and implementing efficient inference mechanisms on that knowledge. Like many companies, Cycorp has ambitions to use the Cyc natural language understanding tools to parse the entire internet to extract structured data.[3] Knowledge base[edit] The concept names in Cyc are known as constants. "All trees are plants".

Hackers backdoor the human brain, successfully extract sensitive data With a chilling hint of the not-so-distant future, researchers at the Usenix Security conference have demonstrated a zero-day vulnerability in your brain. Using a commercial off-the-shelf brain-computer interface, the researchers have shown that it’s possible to hack your brain, forcing you to reveal information that you’d rather keep secret. As we’ve covered in the past, a brain-computer interface is a two-part device: There’s the hardware — which is usually a headset (an EEG; an electroencephalograph) with sensors that rest on your scalp — and software, which processes your brain activity and tries to work out what you’re trying to do (turn left, double click, open box, etc.) BCIs are generally used in a medical setting with very expensive equipment, but in the last few years cheaper, commercial offerings have emerged. For $200-300, you can buy an Emotiv (pictured above) or Neurosky BCI, go through a short training process, and begin mind controlling your computer.

Breakthrough in Augmented Reality Contact Lens | MC²Quantum December 6, 2012 LCD lens. Credit: Image courtesy of Ghent University The Centre of Microsystems Technology (CMST), imec’s associated laboratory at Ghent University (Belgium), has developed an innovative spherical curved LCD display, which can be embedded in contact lenses. The first step toward fully pixilated contact lens displays, this achievement has potential wide-spread applications in medical and cosmetic domains. Unlike LED-based contact lens displays, which are limited to a few small pixels, imec’s innovative LCD-based technology permits the use of the entire display surface. The first prototype presented December 5 contains a patterned dollar sign, depicting the many cartoons that feature people or figures with dollars in their eyes. “Normally, flexible displays using liquid crystal cells are not designed to be formed into a new shape, especially not a spherical one. Source: Ghent University, retrieved December 5, 2012 from: