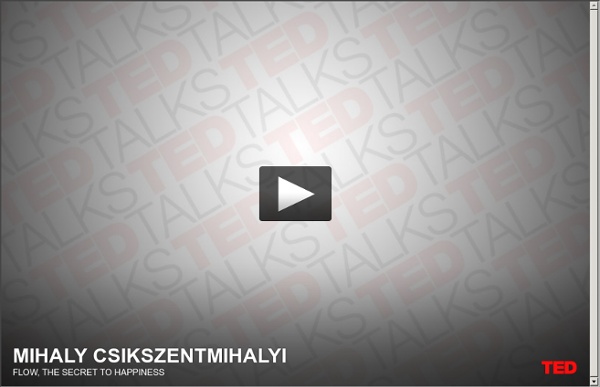 Developing a Growth Mindset in Teachers and Staff An idea that is beginning to gain a lot of favour in educational circles at the moment is the notion of fixed versus growth mindsets, and how they might relate to students and learning. Based on the work of Stanford University psychologist, Carol Dweck, the idea of mindset is related to our understanding of where ability comes from. It has recently been seized upon by educators as a tool to explore our knowledge of student achievement, and ways that such achievement might be improved.

All about flow by Matt Linderman of 37signals Mihaly Csikszentmihalyi, author of “Flow: The Psychology of Optimal Experience,” describes flow as “being completely involved in an activity for its own sake. The ego falls away. Time flies. Every action, movement, and thought follows inevitably from the previous one, like playing jazz. Your whole being is involved, and you’re using your skills to the utmost.” Some Body: How Yoga Taught Me To Finally Respect My Physical Self For the first time, I saw my body as something actual rather than as an abstraction. I realized it was just as important as my mind. It was my vessel, the only mode of transport I have. If I was going to make any sense at all of the small corner of reality that I’ve been given, I was going to have to use my body, and become as fully aware of its processes as possible.

"Toddler" is 20 Years Old, and Forever Young, Due to Baffling Medical Condition 20-year-old BrookeBrooke Greenberg may be 20 years old, but she remains forever trapped inside the body and mind of a toddler, due to a mystery medical condition that has baffled medical experts for years. Also on Shine: How Facebook Saved a Child's Life (and Could Save Many More) "From age one to four, Brooke changed.

EdintheClouds: Carol Dweck Revisits the 'Growth Mindset' By Carol Dweck For many years, I secretly worked on my research. I say "secretly" because, once upon a time, researchers simply published their research in professional journals—and there it stayed. However, my colleagues and I learned things we thought people needed to know. We found that students' mindsets—how they perceive their abilities—played a key role in their motivation and achievement, and we found that if we changed students' mindsets, we could boost their achievement.

Trying Not to Try: How to Cultivate the Paradoxical Art of Spontaneity Through the Chinese Concept of Wu-Wei by Maria Popova “Our modern conception of human excellence is too often impoverished, cold, and bloodless. Success does not always come from thinking more rigorously or striving harder.” “The best way to get approval is not to need it,” Hugh MacLeod memorably counseled. Are all new things a mash-up of what came before? A Q&A with Kirby Ferguson In today’s TEDTalk, director Kirby Ferguson outlines a bold vision of creativity — that it’s not about dreaming up a new song, a new piece of art or a new form of technology in a vacuum, but instead about remixing what has come before. In his fast-paced talk, Kirby reveals that many of our most iconic thinkers — from Henry Ford to Bob Dylan — embraced this idea of what it means to create. As we watched Kirby’s talk, a slew of questions popped to mind. What does this mean for creative people? Can we reach a point where ideas become too self-referential?

Brain Basics: Know Your Brain Introduction The brain is the most complex part of the human body. This three-pound organ is the seat of intelligence, interpreter of the senses, initiator of body movement, and controller of behavior. Lying in its bony shell and washed by protective fluid, the brain is the source of all the qualities that define our humanity. The brain is the crown jewel of the human body. For centuries, scientists and philosophers have been fascinated by the brain, but until recently they viewed the brain as nearly incomprehensible.

Flow the psychology of optimal experience by nicktalop Dec 11