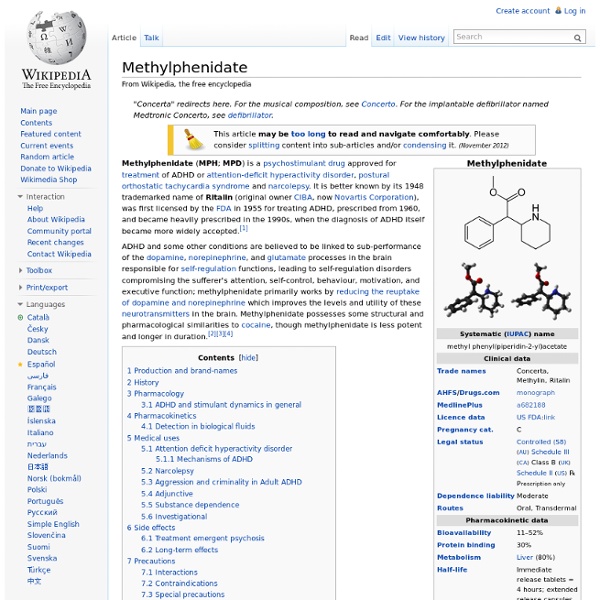 Methylphenidate (trade names Concerta, Methylin, Ritalin, Equasym XL) is a psychostimulant drug and substituted phenethylamine approved for treatment of attention-deficit hyperactivity disorder (ADHD), postural orthostatic tachycardia syndrome and narcolepsy. The original patent was owned by CIBA, now Novartis Corporation. It was first licensed by the U.S. Food and Drug Administration (FDA) in 1955 for treating what was then known as hyperactivity. Prescribed to patients beginning in 1960, the drug became heavily prescribed in the 1990s, when the diagnosis of ADHD itself became more widely accepted.[1][2] Uses[edit] Medical[edit] Attention deficit hyperactivity disorder[edit] Methylphenidate is approved by the U.S. Methylphenidate's long-term efficacy in ADHD treatment has been questioned because of a lack of long-term studies.[16] A 2010 study suggested that, "there is increasing evidence... Some research suggests that methylphenidate treatment need not be indefinite. Narcolepsy[edit] Related:  Neuroscience

Understand - a novelette by Ted Chiang I 'm in the middle of retouching a holograph when the phone rings. I waver between the phone and the console, and reluctantly opt for the phone. I'd normally have the answering machine take any calls when I'm editing, but I need to let people know I'm working again. I lost a lot of business when I was in the hospital: one of the risks of being a freelancer. I touch the phone and say, "Greco Holographics, Leon Greco speaking." "Hey Leon, it's Jerry." "Hi Jerry. "You interested in seeing a movie tonight? "Tonight? "What's that?" "It's called . "Is this some kind of Shakespearean soliloquy?" Too much: with that lighting, the outer edges will be too bright. "I didn't know you were such a fan of poetry." After checking all the numbers once more, I let the computer recalculate the interference pattern. "Thanks, but I think we'll stick with the movie." "Okay, you guys have fun. Suddenly it occurs to me what's just happened. Will the surprises never end? T he Neurologist-in-Chief, Dr. "Yes. I nod.

James Gross James J. Gross is a psychologist best known for his research in emotion and emotion regulation. He is a professor at Stanford University and the director of the Stanford Psychophysiology Laboratory. [1] Education[edit] Gross received his B.A. in philosophy from Yale University in 1987. Work in psychology[edit] Gross' contributions to psychology lie primarily in the area of emotion regulation through psychophysiological research. Awards and fellowships[edit] James Gross has been the recipient of numerous academic awards from psychological and educational associations: References[edit] External links[edit] James Gross's homepage Marginal utility Marginality[edit] The term marginal refers to a small change, starting from some baseline level. As Philip Wicksteed explained the term, "Marginal considerations are considerations which concern a slight increase or diminution of the stock of anything which we possess or are considering"[2] In practice the smallest relevant division may be quite large. Sometimes economic analysis concerns the marginal values associated with a change of one unit of a discrete good or service, such as a motor vehicle or a haircut. Utility[edit] Depending on which theory of utility is used, the interpretation of marginal utility can be meaningful or not. Contemporary mainstream economic theory frequently defers metaphysical questions, and merely notes or assumes that preference structures conforming to certain rules can be usefully proxied by associating goods, services, or their uses with quantities, and defines "utility" as such a quantification.[5] Diminishing marginal utility[edit] Marginalist theory[edit]

David Marr (neuroscientist) Born in Woodford, Essex, and educated at Rugby School; he was admitted at Trinity College, Cambridge on 1 October 1963 (having been awarded an Open Scholarship and the Lees Knowles Rugby Exhibition). Marr is best known for his work on vision, but before he began work on that topic he published three seminal papers proposing computational theories of the cerebellum (in 1969), neocortex (in 1970), and hippocampus (in 1971). Each of those papers presented important new ideas that continue to influence modern theoretical thinking. Marr described vision as proceeding from a two-dimensional visual array (on the retina) to a three-dimensional description of the world as output. Vaina, L. Executive functions Executive functions (also known as cognitive control and supervisory attentional system) is an umbrella term for the management (regulation, control) of cognitive processes, including working memory, reasoning, flexibility, and problem solving as well as planning and execution.[1][2][3] The prefrontal areas of the frontal lobe are necessary but not solely sufficient for executive functions. Neuroanatomy[edit] Historically, the executive functions have been seen as regulated by the prefrontal regions of the frontal lobes, but it is still a matter of ongoing debate if that really is the case. Neuroimaging and lesion studies have identified the functions which are most often associated with the particular regions of the prefrontal cortex. Side view of the brain, illustrating dorsolateral prefrontal and orbitofrontal cortex Furthermore, in their review, Alvarez and Emory state that: "The frontal lobes have multiple connections to cortical, subcortical and brain stem sites. Development[edit]

Paul Bach-y-Rita Paul Bach-y-Rita (April 4, 1934 – November 20, 2006) was an American neuroscientist whose most notable work was in the field of neuroplasticity. Bach-y-Rita was one of the first to seriously study the idea of neuroplasticity (although it was first proposed in the late 19th century), and to introduce sensory substitution as a tool to treat patients suffering from neurological disorders. Bach-y-Rita is known as "the father of sensory substitution".[1] Biography[edit] Bach-y-Rita was born on April 4, 1934, in New York City to Anne Hyman and Pedro Bach-y-Rita,[2] the latter a Catalan poet and teacher at City College of New York.[3] He studied at the Bronx High School of Science, from which he graduated at the age of fifteen before studying at Mexico City College (now the University of the Americas in Puebla). Work in Sensory Substitution and Neuroplasticity[edit] Bach-y-Rita's most notable work was in the field of neuroplasticity. Early research in Neuroscience[edit] See also[edit]

Parkinson's Law UK First edition book cover Originally, Parkinson's law is the adage that "work expands so as to fill the time available for its completion", and the title of a book which made it well-known. However, in current understanding, Parkinson's law is a reference to the self-satisfying uncontrolled growth of the bureaucratic apparatus in an organization. History[edit] Articulated by Cyril Northcote Parkinson as part of the first sentence of a humorous essay published in The Economist in 1955 and since republished online,[1][2] it was reprinted with other essays in the book Parkinson's Law: The Pursuit of Progress (London, John Murray, 1958). A current form of the law is not the one Parkinson refers to by that name in the article, but a mathematical equation describing the rate at which bureaucracies expand over time. Parkinson's Law was translated into many languages. Corollaries[edit] If you wait until the last minute, it only takes a minute to do.[5] the Asimov corollary to Parkinson's law: