Comparison of cognitive architectures. Copycat (software) Copycat is a model of analogy making and human cognition based on the concept of the parallel terraced scan, developed in 1988 by Douglas Hofstadter, Melanie Mitchell, and others at the Center for Research on Concepts and Cognition, Indiana University Bloomington. 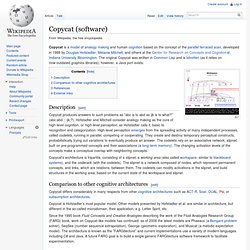 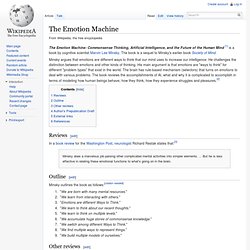 The book is a sequel to Minsky's earlier book Society of Mind. Minsky argues that emotions are different ways to think that our mind uses to increase our intelligence. He challenges the distinction between emotions and other kinds of thinking. His main argument is that emotions are "ways to think" for different "problem types" that exist in the world. The brain has rule-based mechanism (selectors) that turns on emotions to deal with various problems. Reviews[edit] In a book review for the Washington Post, neurologist Richard Restak states that:[3] Minsky does a marvelous job parsing other complicated mental activities into simpler elements. ... 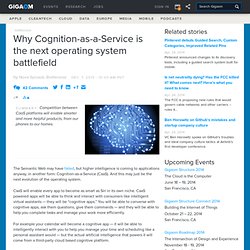 Cyc. The project was started in 1984 by Douglas Lenat at MCC and is developed by the Cycorp company. 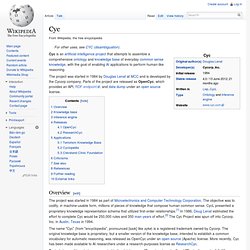 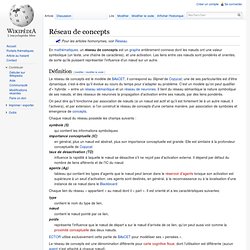 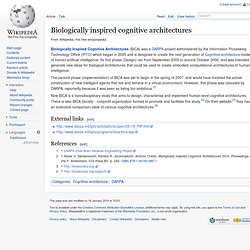 Its first phase (Design) ran from September 2005 to around October 2006, and was intended to generate new ideas for biological architectures that could be used to create embodied computational architectures of human intelligence. The second phase (Implementation) of BICA was set to begin in the spring of 2007, and would have involved the actual construction of new intelligent agents that live and behave in a virtual environment. However, this phase was canceled by DARPA, reportedly because it was seen as being too ambitious.[1] Now BICA is a transdisciplinary study that aims to design, characterise and implement human-level cognitive architectures.

External links[edit] References[edit] Scientists Afflict Computers with Schizophrenia to Better Understand the Human Brain. May 5, 2011 AUSTIN, Texas — Computer networks that can't forget fast enough can show symptoms of a kind of virtual schizophrenia, giving researchers further clues to the inner workings of schizophrenic brains, researchers at The University of Texas at Austin and Yale University have found. 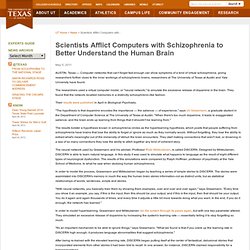 The researchers used a virtual computer model, or "neural network," to simulate the excessive release of dopamine in the brain. They found that the network recalled memories in a distinctly schizophrenic-like fashion. Introduction. ACT-R. Most of the ACT-R basic assumptions are also inspired by the progress of cognitive neuroscience, and ACT-R can be seen and described as a way of specifying how the brain itself is organized in a way that enables individual processing modules to produce cognition. 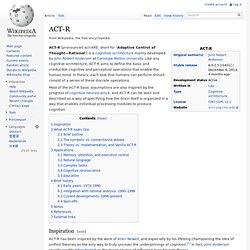 In Natural Networks, Strength in Loops. Examine the delicate branching patterns on a leaf or a dragonfly’s wing and you’ll see a complex network of nested loops. 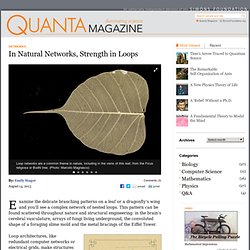 This pattern can be found scattered throughout nature and structural engineering: in the brain’s cerebral vasculature, arrays of fungi living underground, the convoluted shape of a foraging slime mold and the metal bracings of the Eiffel Tower. The Eiffel Tower incorporates many nested loops, designed to distribute strain over the structure. Loop architectures, like redundant computer networks or electrical grids, make structures resistant to damage. As Marcelo Magnasco, a physicist at Rockefeller University, points out, the Eiffel Tower is a clear example of loop construction, designed to maximize the distribution of strain across its recursive frame. Brain Power. Scientists at IBM research unveil a brain-inspired computer and ecosystem Cognitive computing aims to emulate the human brain’s abilities for perception, action and cognition. 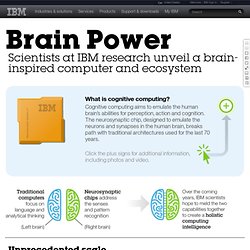 The neurosynaptic chip, designed to emulate the neurons and synapses in the human brain, breaks path with traditional architectures used for the last 70 years. Click the plus signs for additional information, including photos and video. Introducing a Brain-inspired Computer TrueNorth's neurons to revolutionize system architecture By Dharmendra S. Six years ago, IBM and our university partners embarked on a quest—to build a brain-inspired machine—that at the time appeared impossible. Ricardo Sanz Home Page - Biologically Inspired Cognitive Architectures 2011.