Predetermined Genius: A Potential for High Intelligence Lies in Genetics - Futurism. The potential for being a genius resides in your DNA sequences, or more specifically, the DNA sequences that you don't have, according to a group of scientists from the King's College London. 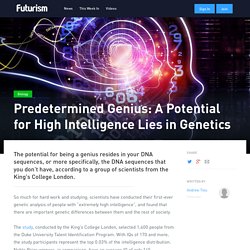 So much for hard work and studying; scientists have conducted their first-ever genetic analysis of people with “extremely high intelligence”, and found that there are important genetic differences between them and the rest of society. The study, conducted by the King’s College London, selected 1,400 people from the Duke University Talent Identification Program. With IQs of 170 and more, the study participants represent the top 0.03% of the intelligence distribution. Noble Prize winners, in comparison, have an average IQ of only 145. Social cognitive theory. Social cognitive theory (SCT), used in psychology, education, and communication, holds that portions of an individual's knowledge acquisition can be directly related to observing others within the context of social interactions, experiences, and outside media influences. 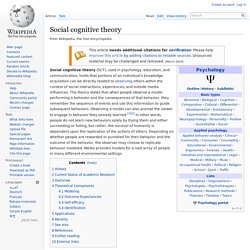 The theory states that when people observe a model performing a behavior and the consequences of that behavior, they remember the sequence of events and use this information to guide subsequent behaviors. Observing a model can also prompt the viewer to engage in behavior they already learned.[1][2] In other words, people do not learn new behaviors solely by trying them and either succeeding or failing, but rather, the survival of humanity is dependent upon the replication of the actions of others.

Depending on whether people are rewarded or punished for their behavior and the outcome of the behavior, the observer may choose to replicate behavior modeled. History[edit] In 1941, Neal E. Priming (psychology) Priming can occur following perceptual, semantic, or conceptual stimulus repetition. 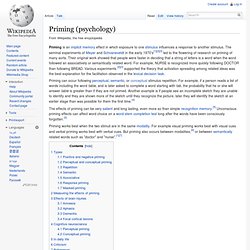 For example, if a person reads a list of words including the word table, and is later asked to complete a word starting with tab, the probability that he or she will answer table is greater than if they are not primed. Another example is if people see an incomplete sketch they are unable to identify and they are shown more of the sketch until they recognize the picture, later they will identify the sketch at an earlier stage than was possible for them the first time.[4] The terms positive and negative priming refer to when priming affects the speed of processing. Negative priming is more difficult to explain. Cognitive Hierarchy Theory. Cognitive Hierarchy Theory (CHT) is a behavioral model originating in behavioral economics and game theory that attempts to describe human thought processes in strategic games. 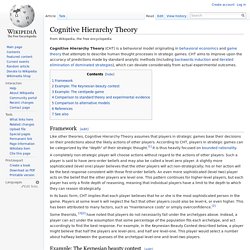 Cognitive Load Theory - Learning Skills From MindTools.com. Helping People Learn Effectively It can be difficult to make progress if your working memory is overloaded. © iStockphoto/alandj Have you ever been on a course where the trainer went through his material so quickly that you barely learned a thing? 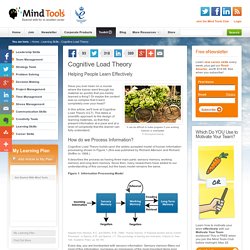 Or maybe the content was so complex that it went completely over your head? In this article, we'll look at Cognitive Load Theory (CLT). How do we Process Information? Cognitive Load Theory builds upon the widely accepted model of human information processing shown in Figure 1 (this was published by Richard Atkinson and Richard Shiffrin in 1968.) It describes the process as having three main parts: sensory memory, working memory and long-term memory.

Figure 1: Information Processing Model Adapted from Atkinson, R.C. and Shiffrin, R.M. (1968). Every day, you are bombarded with sensory information. Information from your sensory memory passes into your working memory, where it is either processed or discarded. What is Cognitive Load Theory? 1. 2. 3. 4. Cognitive Dissonance. Understanding this experiment sheds a brilliant light on the dark world of our inner motivations. 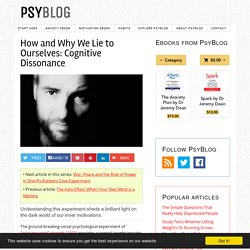 The ground-breaking social psychological experiment of Festinger and Carlsmith (1959) provides a central insight into the stories we tell ourselves about why we think and behave the way we do. The experiment is filled with ingenious deception so the best way to understand it is to imagine you are taking part. So sit back, relax and travel back. The time is 1959 and you are an undergraduate student at Stanford University… As part of your course you agree to take part in an experiment on ‘measures of performance’. Little do you know, the experiment will actually become a classic in social psychology. Every Schema Triggers Another Schema. Schema (psychology) In psychology and cognitive science, a schema (plural schemata or schemas) describes an organized pattern of thought or behavior that organizes categories of information and the relationships among them.[1] It can also be described as a mental structure of preconceived ideas, a framework representing some aspect of the world, or a system of organizing and perceiving new information.[2] Schemata influence attention and the absorption of new knowledge: people are more likely to notice things that fit into their schema, while re-interpreting contradictions to the schema as exceptions or distorting them to fit. 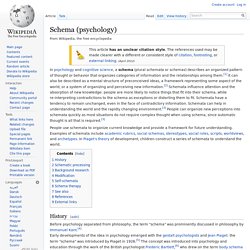 Schemata have a tendency to remain unchanged, even in the face of contradictory information. Schemata can help in understanding the world and the rapidly changing environment.[3] People can organize new perceptions into schemata quickly as most situations do not require complex thought when using schema, since automatic thought is all that is required.[3] Main article: Schema Therapy.