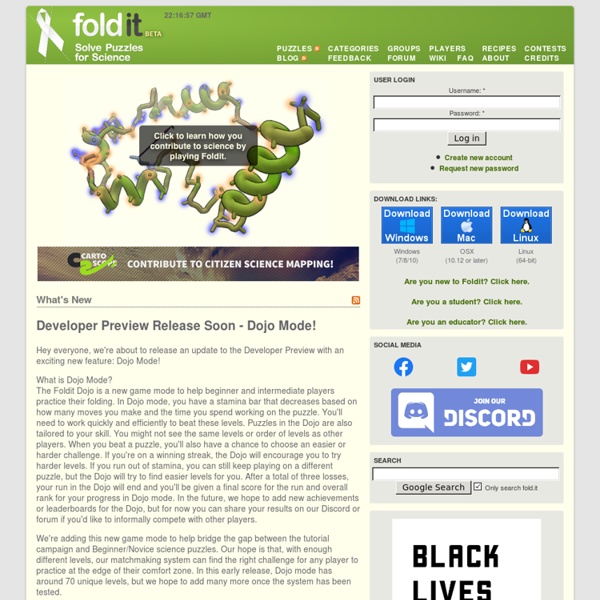 Hey everyone! I will be leading a Science Café about Foldit at the Southpaw Social Club, in San Diego, on April 28. The purpose of the event is to engage with the community in a casual, comfortable setting to talk about the exciting science of protein folding and the Foldit computer game. There will be a short presentation on the science behind Foldit, but the event is mostly dedicated to Q & A and open discussion with the audience. We're very excited about this opportunity to share Foldit in such a personable format! This is also a great chance for any Foldit players in the San Diego area to come together and talk to a member of the Foldit team.

Crowdsourcing improves predictive texting - tech - 25 February 2012 SMARTPHONES may soon get a lot better at finishing your sentences for you - with the help of words and phrases gleaned from crowdsourcing. The software packages in today's phones often struggle with texts and voice commands if a user attempts words or phrases that aren't included in the phone's database. To see if the crowd could help, Keith Vertanen of Montana Tech in Butte and Per Ola Kristensson at the University of St Andrews, UK, called upon workers of the Amazon Mechanical Turk. BEAT THE CENSOR - an illustration of different censoring attempts SCORE: 0000 | Users connected: 000 Why do some countries censor the internet? Frankly we do not know and you would need to ask the respective governments why they are doing it. Where does the data comes from? We use a mashup of data coming from herdict.org and the OpenNet Initiative. The data was made available to us during the EU Hackathon 2011.

Human Genome Project The Human Genome Project (HGP) is an international scientific research project with the goal of determining the sequence of chemical base pairs which make up human DNA, and of identifying and mapping all of the genes of the human genome from both a physical and functional standpoint.[1] It remains the world's largest collaborative biological project.[2] The first official funding for the Project originated with the US Department of Energy’s Office of Health and Environmental Research, headed by Charles DeLisi, and was in the Reagan Administration’s 1987 budget submission to Congress.[3] It subsequently passed both Houses. The Project was planned for 15 years.[4] In 1990, the two major funding agencies, DOE and NIH, developed a memorandum of understanding in order to coordinate plans and set the clock for the initiation of the Project to 1990.[5] At that time, David Galas was Director of the renamed “Office of Biological and Environmental Research” in the U.S. Project[edit] History[edit]

Game « About Love, Hate and the other ones Welcome to the Gamesection!!! Here you can play the game “About Love, Hate and the other ones”. I hope you enjoy it. The game itself is a kind of a series. There will be more and more levels be published. At the end of each release you´ll get a levelcode which you need to play the next part. GetGlue: Check-in to tv, movies and music Social Network for Entertainment Discover what to watch, share what you're watching with friends and fans, and get updates from your favorite shows. Solver Develops Solution to Help Clean Up Remaining Oil From the 1989 Exxon Valdez Disaster Boston, MA and Cordova, AK - November 7, 2007 - InnoCentive, the leader in prize-based Open Innovation sourcing, is helping to make a positive impact on Environmental Conservation by working with the Oil Spill Recovery Institute (OSRI) and other conservation groups. OSRI has posted 3 Challenges on the InnoCentive website, all dealing with oil spill recovery issues. The first of these challenges was solved last week by an oil industry outsider who used his expertise in the concrete industry to come up with the winning solution. John Davis, an InnoCentive Solver from the Central United States, was awarded $20,000 for his creative solution. This first OSRI Challenge required a method for separating oil from water on oil recovery barges after the oil and water had frozen to a viscous mass. Having no background in the oil industry, John applied his expertise and proposed using an existing product commonly used in the concrete industry.

Kodu Kodu is a new visual programming language made specifically for creating games. It is designed to be accessible for children and enjoyable for anyone. The programming environment runs on the Xbox, allowing rapid design iteration using only a game controller for input. Programming as a Creative Medium