The Institute of Science In Society 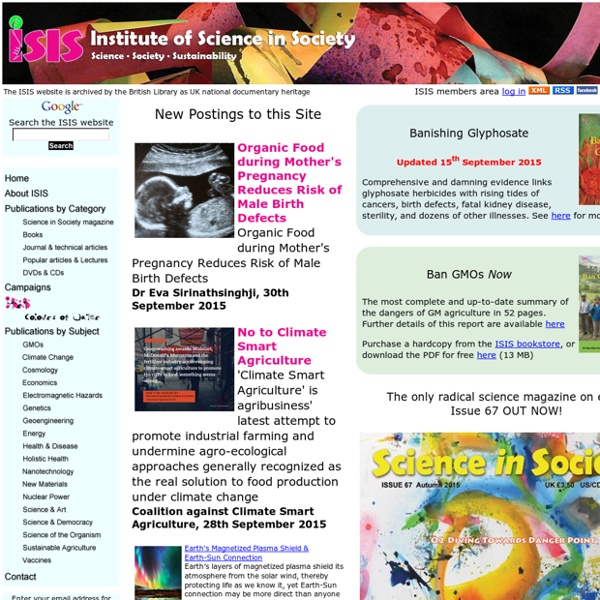 Chronique des Droits de l'Homme Chaos Theory: A Brief Introduction | IMHO What exactly is chaos? The name "chaos theory" comes from the fact that the systems that the theory describes are apparently disordered, but chaos theory is really about finding the underlying order in apparently random data. When was chaos first discovered? The first true experimenter in chaos was a meteorologist, named Edward Lorenz. In 1960, he was working on the problem of weather prediction. Figure 1: Lorenz's experiment: the difference between the starting values of these curves is only .000127. When he came back an hour later, the sequence had evolved differently. By all conventional ideas of the time, it should have worked. This effect came to be known as the butterfly effect. The flapping of a single butterfly's wing today produces a tiny change in the state of the atmosphere. This phenomenon, common to chaos theory, is also known as sensitive dependence on initial conditions. From this idea, Lorenz stated that it is impossible to predict the weather accurately.

medias-matrices/blog Modelling the Relationship between the Food System and Health, Development, and the Environment | Future of Food The aim of this project is to develop the first integrated model of environmental sustainability, health and economic development. Such a model will allow for in-depth exploration of food production and trade scenarios. Global food systems are highly complex. They are both influenced by and have an influence on health, economic development and the environment. Under these conditions, the challenge is to find a sustainable method to feed the world’s increasing population, whilst considering the trade-offs and synergies between health, environmental sustainability and economic development. An initial goal of the project will be to conduct an audit of data sources that are relevant to this project, which will be used to construct a conceptual framework within which to build the integrated model. Sub-Project: Web-Based PRIME Model

décryptage de l'actualité des médias The Most Studied Brain in the World was Scanned for a Year and a Half In Brief Stanford psychologist Russell Poldrack's 18-month study of his own brain reveals new relations between the brain and body. His study makes his brain the most examined in all the world. The Most Studied Brain Stanford psychologist Russell Poldrack climbed into an MRI machine and scanned his brain for 10 minutes Tuesdays and Thursdays. “Connectome” is the collective term describing the major networks between different functional areas of the human brain. Poldrack attempted to find answers to the following questions: How does a connectome map relate to your brain? Poldrack fasted and drew blood on Tuesdays for testing with metabolomics (chemical fingerprints in biological fluids) and genomics (gene tests). What We Learned Here are some of his most interesting finds: Poldrack plans to develop software that can illuminate the interaction between brain function and gene expression.

Roarmag.org « Europeanrevolution WebElements Periodic Table of the Elements Metamedia | La révolution de l'information Future - Is another human living inside you? This story is part of BBC Future’s “Best of 2015” list, our greatest hits of the year. Browse the full list. Once upon a time, your origins were easy to understand. Your dad met your mum, they had some fun, and from a tiny fertilised egg you emerged kicking and screaming into the world. You are half your mum, half your dad – and 100% yourself. Except, that simple tale has now become a lot more complicated. A very large number of different human and non-human individuals are struggling inside us for control “Humans are not unitary individuals but superorganisms,” says Peter Kramer at the University of Padua. That may sound alarming, but it has long been known that our bodies are really a mishmash of many different organisms. Infiltrating siblings In this light, it becomes clear that our actions are not entirely our own. Even non-conjoined twins could be sharing organs without realising it Brother from another mother Women accidentally carrying a "twin's" child

Oulala.net Why Aren’t There More Scientists? A One-Word Explanation – Phenomena: Curiously Krulwich “The type of science that I do is sometimes known as ‘curiosity-driven research,’” writes Hope Jahren, who teaches paleobiology at the University of Hawai‘i. “This means that my work will never result in a marketable product, a useful machine, a prescribable pill, a formidable weapon, or any direct gain.” If by some crazy chance she discovers something useful, that will be “figured out at some much later date by someone who is not me,” she writes. So she’s the real deal—a scientist chasing questions, designing experiments, and showing 19, 20, and 21 year olds how to do it. Yet once she has the cash—you scientists reading this will yawn, but I was a bit startled—it turns out that taxpayer money has an odd habit of vanishing, even when it’s right there in your hands. Every year Congress gives the National Science Foundation roughly 7.3 billion dollars. In her own little corner of things, paleobiology (dinosaurs! Yet “we keep graduating more [students] each year,” she writes. Jeesh. Related