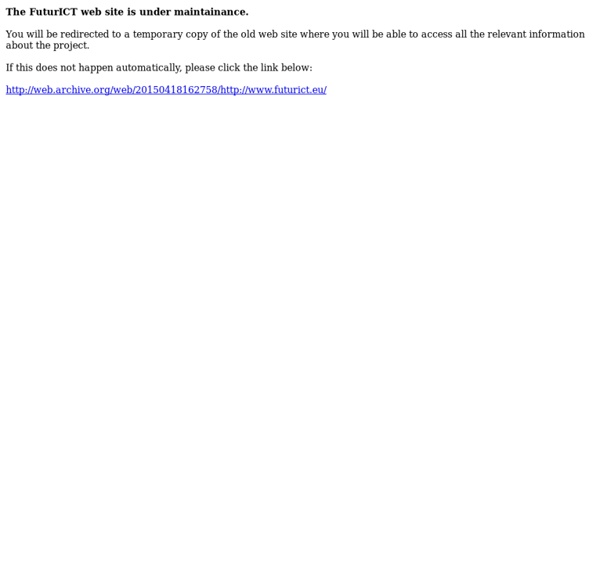 FuturICT project wants science to catch up with the speed at which new problems and opportunities are arising in our changing world as consequences of globalization, technological, demographic and environmental change, and make a contribution to strengthening our societies' adaptiveness, resilience, and sustainability. The FuturICT project will do so by developing new scientific approaches and combining these with the best established methods in areas like multi-scale computer modeling, social supercomputing, large-scale data mining and participatory platforms. To learn more about the FuturICT, download overview documents below or see more here.Download: FuturICT Project Summary Download: FuturICT Outline

Albert-László Barabási Albert-László Barabási (born March 30, 1967) is a Hungarian-American physicist born in Transylvania, Romania, best known for his work in the research of network theory. He is the former Emil T. Hofmann professor at the University of Notre Dame and current Distinguished Professor and Director of Northeastern University's Center for Complex Network Research (CCNR) and an associate member of the Center of Cancer Systems Biology (CCSB) at the Dana Farber Cancer Institute, Harvard University. Randall D. Beer Dr. Paul Williams Research Interests My primary research interest is in understanding how coordinated behavior arises from the dynamical interaction of an animal's nervous system, its body and its environment.

Lincoln Laboratory: Publications: Current Journal Lincoln Laboratory Journal About the Journal The Lincoln Laboratory Journal showcases some of the Laboratory's most innovative and high-impact work, in fields ranging from air traffic control to bioagent sensing to parallel computing. The Journal consists of in-depth feature articles written by Laboratory staff members as well as shorter "Lab Notes" written by the Journal editors. Volume 20, Number 1 - 2013 I485/I585: Biologically Inspired Computing Biological organisms cope with the demands of their environments using solutions quite unlike the traditional human-engineered approaches to problem solving. Biological systems tend to be adaptive, reactive, and distributed. Bio-inspired computing is a field devoted to tackling complex problems using computational methods modeled after design principles encountered in nature. This course is strongly grounded on the foundations of complex systems and theoretical biology. It aims at a deep understanding of the distributed architectures of natural complex systems, and how those can be used to produce informatics tools with enhanced robustness, scalability, flexibility and which can interface more effectively with humans. It is a multi-disciplinary field strongly based on biology, complexity, computer science, informatics, cognitive science, robotics, and cybernetics.

Twitter: immediacy and collective intelligence When working on a Wikipedia entry just last week, I was confronted once again with the helplessness one might experience when the computer does not work properly or when the internet connection is down. Upon typing in the Wikipedia URL, nothing happened. I found myself staring at the blank page before me. What is one to do? Devert2012 As a goodie: a bibtex file that reference all my publications. A Study on Scalable Representations for Evolutionary Optimization of Ground Structures Accepted for publication in Evolutionary Computation, to appear. Robustness and the Halting Problem for Multi-Cellular Artificial Ontogeny Community of Wikipedia The Wikipedia community is the community of contributors to the online encyclopedia Wikipedia. Individual contributors are known as "Wikipedians". The overwhelming majority of Wikipedians are volunteers.