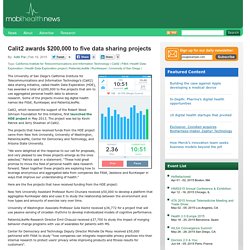 Some of the projects involve big digital health names like Fitbit, RunKeeper, and PatientsLikeMe. Calit2, which received the support of the Robert Wood Johnson Foundation for this initiative, first launched the HDE project in May 2013. BYOD – Bring your own Data. Self-Tracking for Medical Practice and Research. “Facebook would never change their advertsing relying on a sample size as small as we do medical research on.” 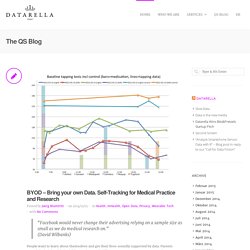 (David Wilbanks) People want to learn about themselves and get their lives soundly supported by data. Parents record the height of their children. When we feel ill, we measure our temperature. Let public have greater say over big health data - opinion - 03 February 2015. We risk harming the huge potential of mass medical data in health research unless public concerns are properly addressed Digital data are being amassed at an astonishing rate. 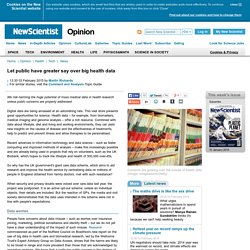 This vast store presents great opportunities for science. Health data – for example, from biomarkers, medical imaging and genome analysis – offer a rich resource. Combined with data about lifestyle, diet and living and working environments, they can yield new insights on the causes of disease and the effectiveness of treatments, help to predict and prevent illness and allow therapies to be personalised. Recent advances in information technology and data science – such as faster computing and improved methods of analysis – make this increasingly possible and are already being used in projects that rely on volunteers, such as the UK Biobank, which hopes to track the lifestyle and health of 500,000 over-45s. When security and privacy doubts were voiced over care.data last year, the project was postponed.

Medicine's Next Big Mission: Understanding Wellness. The bioengineering pioneer Leroy Hood has seen vast changes in medicine over his decades in the biz, in part thanks to his own work on automated DNA sequencing. 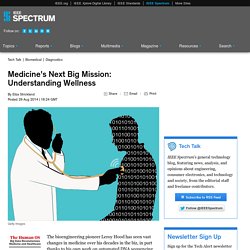 But he's not much for looking back — he's too busy envisioning a future model of medicine. "Contemporary medicine is all about disease, and not about wellness," he says. Hood says the medical profession must learn to measure and maximize wellness, and he's happy to show the way. At the annual meeting of the IEEE Engineering in Medicine and Biology Society, Hood presented his vision for "P4 medicine," which is predictive, preventive, personalized, and participatory. In a keynote speech, he described the 100K Wellness Project he launched this year as president of the Institute for Systems Biology. In March, the project enrolled 108 healthy people to take part in the pilot study.

In a conversation with Spectrum, Hood described the study's first results. Nutrition Researcher Cohort. Sharing Medical Data for Health Research: The Early Personal Health Record Experience. Ongoing clinical studies show new value for patient social networks. It turns out that social networks are good for something other than sharing what's for dinner, notifying the planet what flavor of coffee's in your cup or looking up old pals from high school. 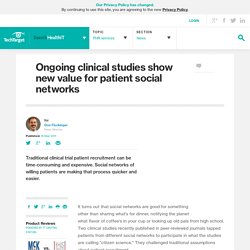 Two clinical studies recently published in peer-reviewed journals tapped patients from different social networks to participate in what the studies are calling "citizen science. " Peer-to-peer Healthcare: Crazy. Crazy. Crazy. Obvious. Here’s my simple definition of peer-to-peer healthcare: Patients and caregivers know things — about themselves, about each other, about treatments — and they want to share what they know to help other people. 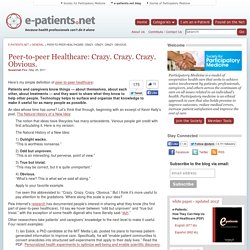 Technology helps to surface and organize that knowledge to make it useful for as many people as possible. An idea whose time has come? Let’s think that through, beginning with an excerpt of Kevin Kelly’s post, The Natural History of a New Idea: The notion that ideas have lifecycles has many antecedents. The Natural History of a New Idea: BIDMC Receives Commonwealth Fund Grant to Develop OurNotes.

BOSTON – Beth Israel Deaconess Medical Center (BIDMC) has received a $450,000 grant from The Commonwealth Fund to develop OurNotes, an initiative to promote active patient engagement in health and illness that invites patients to contribute to their own electronic medical records. 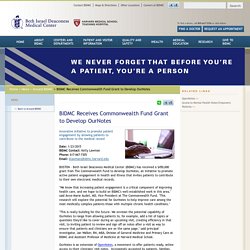 "We know that increasing patient engagement is a critical component of improving health care, and we hope to build on BIDMC's well-established work in this area," said Anne-Marie Audet, MD, Vice President at The Commonwealth Fund. "This research will explore the potential for OurNotes to help improve care among the most medically complex patients–those with multiple chronic health conditions. " "This is really building for the future. OurNotes is an extension of OpenNotes, a movement to offer patients ready, online access to their clinicians' visit notes. "Our research has shown -- and feedback from patients continues to confirm -- that patients benefit from reading their visit notes. 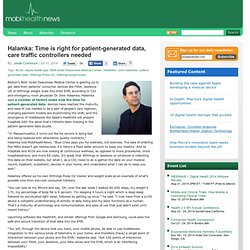 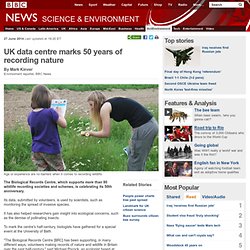 Its data, submitted by volunteers, is used by scientists, such as monitoring the spread of invasive species. It has also helped researchers gain insight into ecological concerns, such as the demise of pollinating insects. To mark the centre's half-century, biologists have gathered for a special event at the University of Bath. "The Biological Records Centre [BRC] has been supporting, in many different ways, volunteers making records of nature and wildlife in Britain over the past half-century," said Michael Pocock, an ecologist based at the BRC. "In a sense, it is the BRC's role to make that process as efficient and successful as possible. " Growing knowledge Early warnings. Survey: Despite risks, patients want to share data. A survey of 2,125 adults with health conditions who are already members of PatientsLikeMe found that 94 percent of adults would be willing to share their health information on social media if it helps doctors improve care even though a majority of those surveyed also understand the data could also be used negatively. 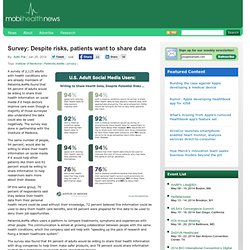 The survey was done in partnership with the Institute of Medicine. Survey: 40 percent would share personal health data if it remained anonymous. Almost 90 percent of Americans say they would make their personal health data available to researchers to help them better understand a disease or to improve care and treatment options, according to a survey of 1,001 Americans over the age of 18 conducted by research firm Kelton and healthcare communications firm Makovsky Health. Within this group, 26 percent of consumers would share regardless of whether data were anonymous, 23 percent would share if they could control which data were anonymous, and 40 percent would share if promised that all data would remain anonymous. The survey also found that around 35 percent of consumers would trust a disease website sponsored by a pharmaceutical company, but 16 percent said they would never visit a disease website sponsored by a pharma company. Forget the Quantified Self. We Need to Build the Quantified Us.

Modwells, a concept designed by Artefact, where the two authors work. 23andMe cofounder launches quantified self-powered health Q&A platform. Tags: big data | Curious | disease community | PatientsLikeMe | New York-based Curious, a company that aims to provide people with platform on which they can ask health questions and collaborate with others to find answers, is planning to launch its online platform this summer, according to an article in Fast Company. 23andMe cofounder Linda Avey is one of three founders that started the company.

Avey left direct to consumer genomics company 23andMe in 2009 to work on Alzheimer’s research. Because the company hasn’t launched its product yet, the website currently shows a scrolling list a questions that range from ’Does a viral illness show its effects somewhere in my DNA?’ In-Depth: Providers’ inevitable acceptance of patient generated health data. By Brian Dolan Four years ago a keynote speaker at the American Medical Informatics Association meeting in Washington D.C. made a provocative prediction about the near-future importance of patient generated health data: Scientific American. WSJ. National Instiute of Mental Health. Meredith, a 15-year-old high school student from San Diego, wrote this year’s breakthrough paper on modeling global epidemics. An 11-year-old boy from upstate New York solved a problem in protein folding using a computer game called Foldit.

And an octogenarian working with his retired physician partner created the Cinderella Therapeutics Foundation in Holland to launch rapid trials of drugs rescued from industry. These are a few of the stories from the Sage Bionetworks Commons Congress in San Francisco this weekend, supported by Google and the Kauffman Foundation for Entrepreneurship. BBC.