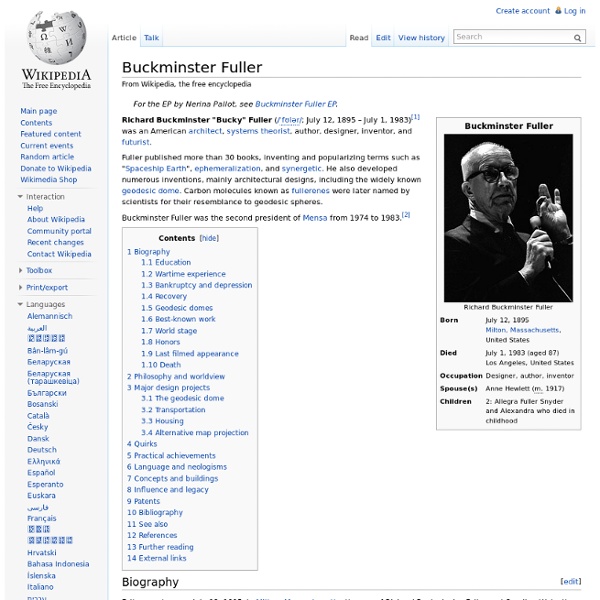 Richard Buckminster "Bucky" Fuller (/ˈfʊlər/; July 12, 1895 – July 1, 1983)[1] was an American architect, systems theorist, author, designer, inventor, and futurist. Buckminster Fuller was the second president of Mensa from 1974 to 1983.[2] Biography[edit] Years later, he decided that this sort of experience had provided him with not only an interest in design, but also a habit of being familiar with and knowledgeable about the materials that his later projects would require. Fuller earned a machinist's certification, and knew how to use the press brake, stretch press, and other tools and equipment used in the sheet metal trade.[3] Education[edit] Wartime experience[edit] Between his sessions at Harvard, Fuller worked in Canada as a mechanic in a textile mill, and later as a laborer in the meat-packing industry. Depression and epiphany[edit] Buckminster Fuller recalled 1927 as a pivotal year of his life. In 1927 Fuller, then aged 32, lost his job as president of Stockade. Recovery[edit]

Marcel Duchamp Henri-Robert-Marcel Duchamp (French: [maʁsɛl dyʃɑ̃]; 28 July 1887 – 2 October 1968) was a French, naturalized American painter, sculptor, chess player and writer whose work is associated with Cubism, conceptual art and Dada,[1][2][3] although he was careful about his use of the term Dada[4] and was not directly associated with Dada groups. Duchamp is commonly regarded, along with Pablo Picasso and Henri Matisse, as one of the three artists who helped to define the revolutionary developments in the plastic arts in the opening decades of the twentieth century, responsible for significant developments in painting and sculpture.[5][6][7][8] Duchamp has had an immense impact on twentieth-century and twenty first-century art. By World War I, he had rejected the work of many of his fellow artists (like Henri Matisse) as "retinal" art, intended only to please the eye. Instead, Duchamp wanted to put art back in the service of the mind.[9] Early life and education[edit] Early work[edit] Dada[edit]

Banksy Banksy is an anonymous England-based street artist, vandal, political activist, and film director.[1] His satirical street art and subversive epigrams combine dark humour with graffiti executed in a distinctive stenciling technique. His works of political and social commentary have been featured on streets, walls, and bridges of cities throughout the world.[2] Banksy's work grew out of the Bristol underground scene, which involved collaborations between artists and musicians.[3] Banksy says that he was inspired by 3D, a graffiti artist who later became a founding member of the English musical group Massive Attack.[4] Banksy displays his art on publicly visible surfaces such as walls and self-built physical prop pieces. Personal life and disputed identity He does all this and he stays anonymous. Brad Pitt[14] In 1994, Banksy checked into a New York hotel using the name "Robin",[22] and in June 2017, DJ Goldie referred to Banksy as "Rob".[23] Career Early career (1990–2001) Banksy[45] Dismaland

John Muir In his later life, Muir devoted most of his time to the preservation of the Western forests. He petitioned the U.S. Congress for the National Park bill that was passed in 1890, establishing Yosemite National Park. The spiritual quality and enthusiasm toward nature expressed in his writings has inspired readers, including presidents and congressmen, to take action to help preserve large nature areas.[3] Today Muir is referred to as the "Father of the National Parks"[4] and the National Park Service has produced a short documentary about his life.[5] John Muir has been considered "an inspiration to both Scots and Americans".[6] Muir's biographer, Steven J. Early life[edit] Boyhood in Scotland[edit] Muir was born in the small house at left. Although he spent the majority of his life in America, Muir never forgot his roots in Scotland. Immigration to America[edit] When he was 22 years old, John Muir enrolled at the University of Wisconsin–Madison, paying his own way for several years.

Jimi Hendrix American guitarist, singer and songwriter James Marshall "Jimi" Hendrix (born Johnny Allen Hendrix; November 27, 1942 – September 18, 1970) was an American musician, singer, and songwriter. Although his mainstream career spanned only four years, he is widely regarded as one of the most influential electric guitarists in the history of popular music, and one of the most celebrated musicians of the 20th century. The Rock and Roll Hall of Fame describes him as "arguably the greatest instrumentalist in the history of rock music".[1] Born in Seattle, Washington, Hendrix began playing guitar at the age of 15. Ancestry and childhood Hendrix's paternal grandparents, Ross and Nora Hendrix, pre-1912 Jimi Hendrix had a diverse heritage.[4][5] His paternal grandmother, Zenora "Nora" Rose Moore, was African American and one-quarter Cherokee. After returning from service, Al reunited with Lucille, but his inability to find steady work left the family impoverished. First instruments Military service Career

Edward Abbey American author and essayist (1927-1989) Early life and education[edit] Abbey was born in Indiana, Pennsylvania, on January 29, 1927 to Mildred Postlewait and Paul Revere Abbey. Abbey graduated from high school in Indiana, Pennsylvania, in 1945. In the military, Abbey had applied for a clerk typist position but instead served two years as a military police officer in Italy. When he returned to the United States, Abbey took advantage of the G.I. During this time, he had few male friends but had intimate relationships with a number of women. While an undergraduate, Abbey was the editor of a student newspaper in which he published an article titled "Some Implications of Anarchy". Upon receiving his honorable discharge papers, Abbey sent them back to the department with the words "Return to Sender". Abbey's master's thesis explored anarchism and the morality of violence, asking the two questions: "To what extent is the current association between anarchism and violence warranted?"

Theodore Roosevelt 26th president of the United States Theodore Roosevelt Jr. ( ROH-zə-velt;[b] October 27, 1858 – January 6, 1919) was an American statesman, politician, conservationist, naturalist, and writer who served as the 26th president of the United States from 1901 to 1909. He served as the 25th vice president from March to September 1901 and as the 33rd governor of New York from 1899 to 1900. Roosevelt was a sickly child with debilitating asthma, but he overcame his health problems by embracing a strenuous lifestyle, as well as growing out of his asthma naturally in his young adult years. Roosevelt took office as vice president in March 1901 and assumed the presidency at age 42 after McKinley was assassinated the following September. Early life and family Theodore Roosevelt at age 11 Roosevelt's coat of arms, featuring a rose bush in reference to the name: "Roosevelt", which is Dutch for "rose field"[5] Roosevelt's youth was largely shaped by his poor health and debilitating asthma. Education Media

Mahatma Gandhi Mohandas Karamchand Gandhi (pronounced [ˈmoːɦənd̪aːs ˈkərəmtʃənd̪ ˈɡaːnd̪ʱi] ( ); 2 October 1869 – 30 January 1948) was the preeminent leader of Indian nationalism in British-ruled India. Employing nonviolent civil disobedience, Gandhi led India to independence and inspired movements for civil rights and freedom across the world. The honorific Mahatma (Sanskrit: "high-souled", "venerable"[2])—applied to him first in 1914 in South Africa,[3]—is now used worldwide. He is also called Bapu (Gujarati: endearment for "father",[4] "papa"[4][5]) in India. Gandhi famously led Indians in challenging the British-imposed salt tax with the 400 km (250 mi) Dandi Salt March in 1930, and later in calling for the British to Quit India in 1942. Gandhi is commonly, though not officially,[10] considered the Father of the Nation[11] in India. Early life and background Mohandas Karamchand Gandhi in his earliest known photo, aged 7, c. 1876 English barrister Civil rights movement in South Africa (1893–1914)

Bob Marley Robert Nesta "Bob" Marley, OM (6 February 1945 – 11 May 1981) was a Jamaican reggae singer, song writer, musician, and guitarist who achieved international fame and acclaim.[1][2] Starting out in 1963 with the group The Wailers, he forged a distinctive songwriting and vocal style that would later resonate with audiences worldwide. The Wailers would go on to release some of the earliest reggae records with producer Lee Scratch Perry.[3] After the Wailers disbanded in 1974,[4] Marley pursued a solo career that culminated in the release of the album Exodus in 1977, which established his worldwide reputation and produced his status as one of the world's best-selling artists of all time, with sales of more than 75 million records.[5][6] He was a committed Rastafari who infused his music with a sense of spirituality.[7] Early life and career Marley and Neville Livingston (later known as Bunny Wailer) had been childhood friends in Nine Mile. Bob Marley and the Wailers 1962–1972: Early years Notes