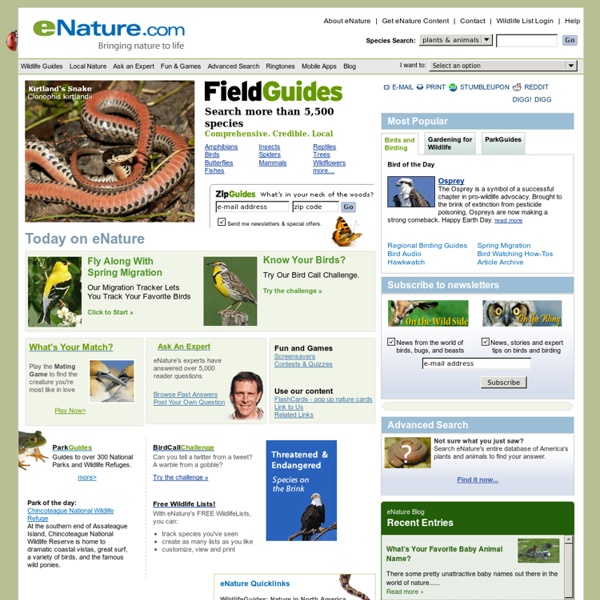 NetVet Veterinary Resources / Electronic Zoo Animal Species Text and Non-Netscape Browsers, [Start Here] Select a Species from the Pick List, the Image Map above, or the Menu below. Return to: Emperor Penguin Emperor penguins spend their entire lives on Antarctic ice and in its waters. They survive—breeding, raising young, and eating—by relying on a number of clever adaptations. These flightless birds breed in the winter. After a courtship of several weeks, a female emperor penguin lays one single egg then leaves! Finally, after about two months, the females return from the sea, bringing food they regurgitate, or bring up, to feed the now hatched chicks. As the young penguins grow, adults leave them in groups of chicks called crèches while they leave to fish.

6 Wild Tricks of Earth's Complicated Atmosphere | Earth Science Dry, gusty Santa Ana winds fanned a four-day wildfire in Southern California in 2008, contributing to this tornadolike fire whirl that appeared near homes in Yorba Linda. Fire whirls arise when superheated air above a wildfire drives strong updrafts and downdrafts that get sheared by the wind, causing them to twist into a vortex that funnels flames upward. Fortunately, most of these infernal twisters die out quickly, although some—such as the “dragon twist” that ripped through Tokyo in 1923 in the aftermath of the Great Kanto Earthquake, killing 44,000 people—can grow lethally large. For more than a century, witnesses have reported nighttime sightings of brief, glowing tendrils, halos, and streaks around clouds. Scientists were skeptical until a group of researchers captured one on camera in 1989. As it turns out, weird glows—now known as transient luminous events, or TLEs—really do happen above thunderstorms.

Biology For Kids - KidsBiology.com The Forest Unseen: A Year’s Watch in Sewanee’s Forest | Guest Blog The western escarpment of the Cumberland Plateau, seen from Piney Point, Sewanee, TN. David Haskell observed one square meter of forest here. Specifically, this small patch of forest sits on the slope at the center of the photo, just around the ridge. (credit: David G. Haskell) Thoreau went to the woods to suck out all the marrow of life. I went to the forest seeking a new way to experience the natural world. So, I watched a small patch of leaves and jumbled rocks tucked in a notch on a wooded slope. The Forest Unseen, published by Viking/Penguin. On almost every visit, the forest surprised me with interesting creatures (scuttling shrews, waddling salamanders, peculiar mushrooms) or ecological interactions (bees covered in pink pollen, writhing parasitic worms, ants wrestling with caterpillars). The forest, I soon discovered, is ruled by a proletariat of tiny and seemingly obscure creatures. Lying down, I pressed my nose to the litter: fat, warm, truffly smells.

The Biology Corner Vast fossil bed found in Rockies What intrigued Jean-Bernard Caron was the way the dark stone sparkled in the sunlight. What thrilled him was the reason: every sparkle was the glint of an ancient eyeball shining back at him across half a billion years of time. The abundance of those eyes, along with the preserved remains of thousands of specimens that come with them, speaks to the spectacular richness of a newly documented fossil site in the Canadian Rockies. “This is a new motherlode,” said Dr. Caron, a paleontologist with the Royal Ontario Museum, and leader of the international team that made the discovery. According to Dr. Like the Burgess Shale, the new find dates back to the Cambrian Period, some 505 million years ago and it has yielded some of the same bizarre creatures. “This kind of diversity hasn’t been seen in decades,” said Douglas Erwin, a curator with the Smithsonian Institution in Washington, D.C. who was not involved in the discovery. “There’s a lot more to come,” said Dr.