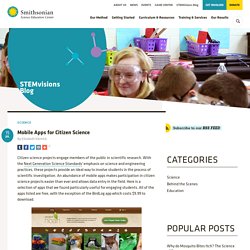 With the Next Generation Science Standards' emphasis on science and engineering practices, these projects provide an ideal way to involve students in the process of scientific investigation. An abundance of mobile apps makes participation in citizen science projects easier than ever and allows data entry in the field. Here is a selection of apps that we found particularly useful for engaging students. All of the apps listed are free, with the exception of the BirdLog app which costs $9.99 to download.

CitizenSci. Projects for Exclusively online. Formal Verification is the process of rigorously analyzing software to detect flaws that make programs vulnerable to exploitation. 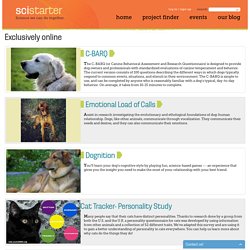 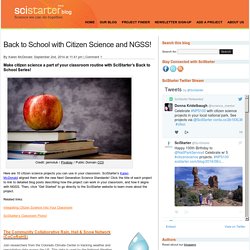 Here are 10 citizen science projects you can use in your classroom. SciStarter’s Karen McDonald aligned them with the new Next Generation Science Standards! Click the title of each project to link to detailed blog posts describing how the project can work in your classroom, and how it aligns with NGSS. Citizen science - National Geographic Society.

Citizen science is the practice of public participation and collaboration in scientific research to increase scientific knowledge. 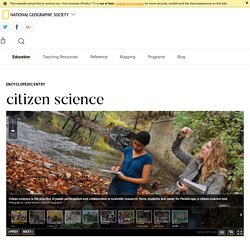 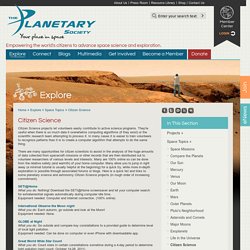 They're useful when there is so much data it overwhelms computing algorithms (if they exist) or the scientific research team attempting to process it. In many cases it is easier to train volunteers to recognize patterns than it is to create a computer algorithm that attempts to do the same thing. There are many opportunities for citizen scientists to assist in the analysis of the huge amounts of data collected from spacecraft missions or other records that are then distributed out to volunteer researchers of various levels and interests. Many are 100% online so can be done from the relative safety (and warmth) of your home computer. For Citizen Scientists. Citizen Scientists have helped to answer serious scientific questions, provide vital data to the astronomical community, and have discovered thousands of objects including nebulas, supernovas, and gamma ray bursts. 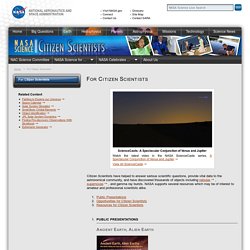 NASA supports several resources which may be of interest to amateur and professional scientists alike. PUBLIC PRESENTATIONS Ancient Earth, Alien Earth Ancient Earth Alien Earth If you could visit the early Earth, you would find it a vastly different, inhospitable, and alien place. Yet, it was in this environment that life on this planet began and evolved. What do we know about the ancient Earth and how can that guide our search for habitable planets orbiting other stars? What is Citizen Science and PPSR? — Citizen Science Central. Zooniverse. Citizen Science. 8 Apps That Turn Citizens into Scientists. America's Wildlife Resource. Videos » Academy of Science of St. Louis » Connecting Science and the Community Since 1856. The Academy films a number of its broad range of science speakers, tours, and community-wide public talks, workshops and citizen science events catering to all ages and backgrounds. 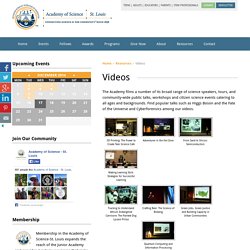 Find popular talks such as Higgs Boson and the Fate of the Universe and Cyberforensics among our videos. 3D Printing: The Power to Create Teen Science Cafe Adventures in the Hot Zone From Sand to Silicon: Semiconductors.