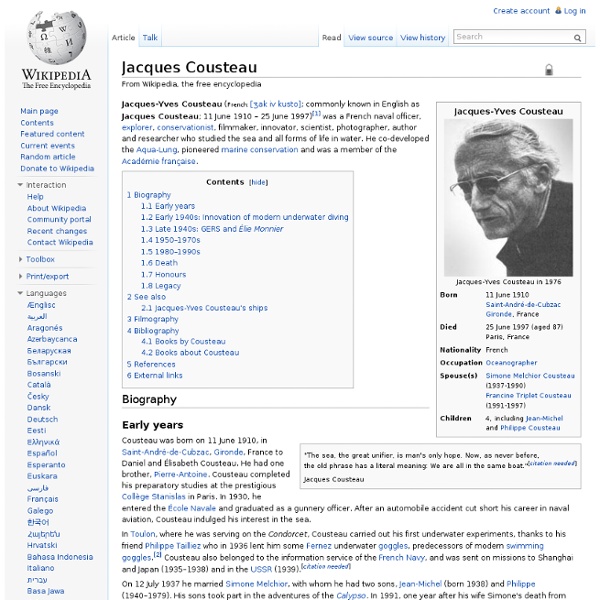 Jacques-Yves Cousteau AC (French: [ʒak iv kusto]; commonly known in English as Jacques Cousteau; 11 June 1910 – 25 June 1997)[1] was a French naval officer, explorer, conservationist, filmmaker, innovator, scientist, photographer, author and researcher who studied the sea and all forms of life in water. He co-developed the Aqua-Lung, pioneered marine conservation and was a member of the Académie française. Biography "The sea, the great unifier, is man's only hope. Jacques Cousteau Early years Cousteau was born on 11 June 1910, in Saint-André-de-Cubzac, Gironde, France to Daniel and Élisabeth Cousteau. In Toulon, where he was serving on the Condorcet, Cousteau carried out his first underwater experiments, thanks to his friend Philippe Tailliez who in 1936 lent him some Fernez underwater goggles, predecessors of modern swimming goggles.[1] Cousteau also belonged to the information service of the French Navy, and was sent on missions to Shanghai and Japan (1935–1938) and in the USSR (1939).

Abraham Maslow Abraham Harold Maslow (/ˈmæzloʊ/[citation needed]; April 1, 1908 – June 8, 1970) was an American psychologist who was best known for creating Maslow's hierarchy of needs, a theory of psychological health predicated on fulfilling innate human needs in priority, culminating in self-actualization.[2] Maslow was a psychology professor at Brandeis University, Brooklyn College, New School for Social Research and Columbia University. He stressed the importance of focusing on the positive qualities in people, as opposed to treating them as a "bag of symptoms."[3] A Review of General Psychology survey, published in 2002, ranked Maslow as the tenth most cited psychologist of the 20th century.[4] Biography[edit] Youth[edit] Born and raised in Brooklyn, New York, Maslow was the oldest of seven children and was classed as "mentally unstable" by a psychologist. College and university[edit] Academic career[edit] He continued his research at Columbia University, on similar themes. Death[edit] Legacy[edit]

Inland Seas Worth Seeing: The 10 Most Amazing Lakes There’s a lot to like about lakes. Big lakes, tiny lakes, freshwater lakes, briny lakes… and more than a few that are one-of-a-kind natural wonders. These 10 amazing lakes “shore” are special; inland seas that are truly sights to see! Jellyfish Lake, Palau (images via: Ah Boon) Most people first learned about Jellyfish Lake while watching Survivor: Palau or Survivor: Micronesia, in which a trip to swim in a secluded lake full of stingless jellyfish was the prize for winning a reward challenge. Diving Jelly Fish Lake in Palau, via Talk.pa (image via: ECheng) Millions of jellyfish live in the lake, subsisting via a symbiotic relationship with algae they host within their bodies. Mono Lake, California, USA (images via: Art.com, Earth From Space and E.J.Peiker) Mono Lake, located near the California-Nevada border east of Yosemite Nat’l Park, is superlative in a great many ways. (image via: The Living Moon) Diego de la Haya, Costa Rica (image via: Sanchiri) Lake Nyos, Cameroon Lake Baikal, Russia

Dive Gear | Scuba Diving Equipment | Deep Blue Dive Henry David Thoreau Thoreau's books, articles, essays, journals, and poetry amount to more than 20 volumes. Among his lasting contributions are his writings on natural history and philosophy, in which he anticipated the methods and findings of ecology and environmental history, two sources of modern-day environmentalism. His literary style interweaves close observation of nature, personal experience, pointed rhetoric, symbolic meanings, and historical lore, while displaying a poetic sensibility, philosophical austerity, and Yankee attention to practical detail.[3] He was also deeply interested in the idea of survival in the face of hostile elements, historical change, and natural decay; at the same time he advocated abandoning waste and illusion in order to discover life's true essential needs.[3] Pronunciation of his name[edit] Physical appearance[edit] Thoreau had a distinctive appearance, with a nose that he called "my most prominent feature His face, once seen, could not be forgotten. Life[edit]

Kirby Morgan Carl Sagan Carl Edward Sagan (/ˈseɪɡən/; November 9, 1934 – December 20, 1996) was an American astronomer, cosmologist, astrophysicist, astrobiologist, author, science popularizer, and science communicator in astronomy and other natural sciences. He is best known for his work as a science popularizer and communicator. His best known scientific contribution is research on extraterrestrial life, including experimental demonstration of the production of amino acids from basic chemicals by radiation. Sagan assembled the first physical messages sent into space: the Pioneer plaque and the Voyager Golden Record, universal messages that could potentially be understood by any extraterrestrial intelligence that might find them. Sagan argued the now accepted hypothesis that the high surface temperatures of Venus can be attributed to and calculated using the greenhouse effect.[1] Early life[edit] My parents were not scientists. 1939 World's Fair[edit] World War II[edit] Inquisitiveness about nature[edit]

+ Pool: Kickstarter Simply the most popular Closed-circuit Rebreather in the world... AP Diving Inspiration, Evolution and Evolution+ Antoine de Saint-Exupéry French writer and aviator Saint-Exupéry spent 28 months in America, during which he wrote three of his most important works, then joined the Free French Air Force in North Africa—although he was far past the maximum age for such pilots and in declining health. He disappeared and is believed to have died while on a reconnaissance mission from Corsica over the Mediterranean on 31 July 1944. Prior to the war, Saint-Exupéry had achieved fame in France as an aviator. His literary works posthumously boosted his stature to national hero status in France,[7][8] including The Little Prince which has been translated into 300 languages.[9] He earned further widespread recognition with international translations of his other works. Youth and aviation[edit] Coat of arms of the de Saint-Exupéry family since the 18th century. Birthplace of Saint-Exupéry in the Presqu'île section of Lyon, on the street now named after him, in blue at lower left. Writing career[edit] Desert crash[edit] Return to war[edit]