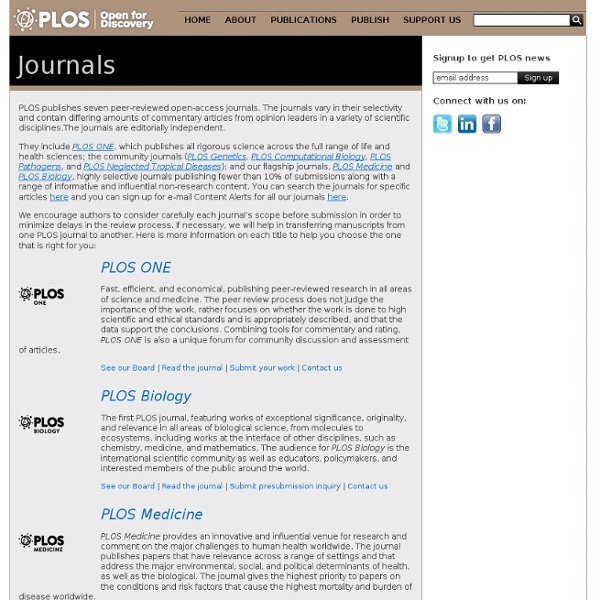 PLOS publishes seven peer-reviewed open-access journals. The journals vary in their selectivity and contain differing amounts of commentary articles from opinion leaders in a variety of scientific disciplines.The journals are editorially independent. They include PLOS ONE, which publishes all rigorous science across the full range of life and health sciences; the community journals (PLOS Genetics, PLOS Computational Biology, PLOS Pathogens, and PLOS Neglected Tropical Diseases); and our flagship journals, PLOS Medicine and PLOS Biology, highly selective journals publishing fewer than 10% of submissions along with a range of informative and influential non-research content. We encourage authors to consider carefully each journal’s scope before submission in order to minimize delays in the review process. Fast, efficient, and economical, publishing peer-reviewed research in all areas of science and medicine. PLOS Biology PLOS Medicine PLOS Computational Biology PLOS Genetics PLOS Pathogens Related:  SCIENTIFIC INFORMATION UNDER THREAT

Liberating Science and Imagination ISIS Report 09/01/13 Science co-opted by big business endangers society and stultifies the imagination on which the advancement of science depends; liberating science and the imagination is top priority for the survival of people and planet Dr Mae-Wan Ho Please circulate widely and repost, but you must give the URL of the original and preserve all the links back to articles on our website. If you find this report useful, please support ISIS by subscribing to our magazine Science in Society, and encourage your friends to do so. Or have a look at the ISIS bookstore for other publications Liberating Science Science is central to every aspect of our everyday lives and our wellbeing, be it to do with climate change, genetically modified organisms (GMOs), nuclear energy, mobile telephony, or the tens of thousands of chemicals to which we are constantly exposed in our homes, workplace, and the general environment. Liberating Imagination Science unfree stultifies and stifles the imagination. Ho MW.

BiomimicryNews.com - Biomimicry News E-Journals.Org ISIS News no.7/8 part35 Book Briefs Captive State: The Corporate Takeover of Britain by George Monbiot, MacMillan, London, 2000. Review by Mae-Wan Ho The corporate take over is here and threatening the foundations of democratic government. That is the message of George Monbiot’s explosive and important book Corporations have seized control of our hospitals, schools and universities. The chapter on corporate takeover of universities is too close to home. In the course of the genetic engineering debate, I had begun to realise that the corporate take over of science was the greatest threat to democracy and to the survival of our planet [1]. In August, less than two months after my retirement, my research assistant and I were both officially banned from the University campus. The University made no attempt to communicate with me or with my assistant before imposing the ban. After days on the telephone to my Union representative, the Dean of Science agreed to see me. Genetic Engineering Dream or Nightmare?

ScienceMatters @ Berkeley Phys.org - Science News, Technology, Physics, Nanotechnology, Space Science, Earth Science, Medicine Politically Correct Science for the Masses ISIS Report 27/01/14 Real democracy does not just mean the right to vote. People must also have access to the information they need to make an informed choice; that’s why scientists must be free to tell the truth and express their views accordingly on scientific issues Prof Peter Saunders Please circulate widely and repost, but you must give the URL of the original and preserve all the links back to articles on our website. If you find this report useful, please support ISIS by subscribing to our magazine Science in Society, and encourage your friends to do so. Shaping science to politics When US scientists produced a report warning that the current level of greenhouse gas emissions would almost certainly lead to unsustainable climate change, the Bush administration did not simply ignore their findings. At the time, the episode may have looked like yet another excess of an administration notorious for relying more on faith and instinct than on reality [3]. Silencing scientists To conclude